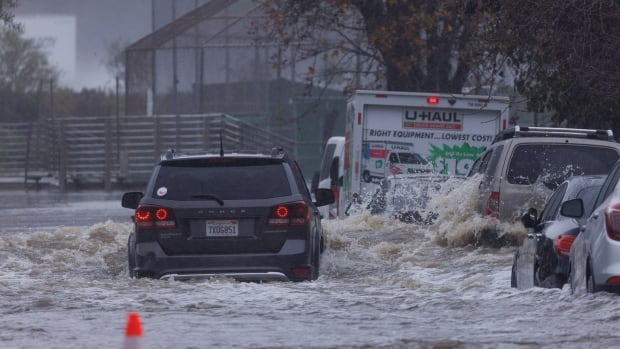 The ninth atmospheric river in a three-week series of major winter storms was churning through California on Monday, leaving mountain driving dangerous and the flooding risk high near swollen rivers even as the sun came out in some areas.

“If you must travel, be prepared for dangerous travel conditions, significant travel delays and road closures,” the weather service office in Sacramento said on Twitter.

The University of California Berkeley Central Sierra Snow Lab tweeted Monday morning that it had recorded 126 centimetres of new snow since Friday.

A back country avalanche warning was issued for the central Sierra, including the greater Tahoe area.

With so much precipitation since Dec. 26, the soil in parts of California has been unable to absorb all the excess moisture, leading to mudslides and sinkholes.

Monday’s system was relatively weak compared with earlier storms, but flooding and mudslide risks remained because the state was so saturated, forecasters said.

Mostly dry days were in the week’s forecast, though some parts of Northern California could see more rain at midweek.

The sun came out Monday in San Francisco, where 51.5 cm of rain has fallen at the city’s airport since Oct. 1, when California typically begins recording rainfall for the year. The average for the “water year” is 49.8 cm, “so we’ve surpassed the yearly total with 8 more months to go,” the San Francisco weather service office tweeted.

Across the bay in Berkeley, 10 homes were evacuated Monday when a sodden hillside collapsed, sending mud onto properties. No injuries were reported.

Up to five centimetres of rain fell Sunday in the soaked Sacramento Valley, where residents of Wilton and surrounding communities were warned to prepare to leave if the Cosumnes River rose further.

In Monterey County, the swollen Salinas River swamped farmland over the weekend and officials said Monday that it was still rising. To the east, flood warnings were still in effect for Merced County in the agricultural Central Valley, where Gov. Gavin Newsom visited Saturday.

California has been inundated with rain since late December, but the state’s water shortages are not over.

In Southern California, the sun shone in Los Angeles, but winter storm warnings and advisories were still in place for mountain areas, where many roads remained impassable because of mud and rock slides. Two northbound lanes of Interstate 5 near Castaic in northern L.A. County were closed indefinitely after a hillside collapsed.

At least 20 storm-related deaths have occurred, and a five-year-old boy remained missing after being swept out of his mother’s car by floodwaters in San Luis Obispo County.

Forecasters were keeping their eyes on a storm forming in the Pacific to see if it gains enough strength to become the state’s 10th atmospheric river of the season.

Either way it is likely to only bring light rain and will be confined mostly to Northern California when it makes landfall Wednesday, state climatologist Dr. Mike Anderson said Monday during a state weather briefing.

What is an atmospheric river?

It’s a term that became more widely known after record-setting flooding hit B.C. in November 2021, but as meteorologist Johanna Wagstaffe explains, atmospheric rivers are not new to the province.