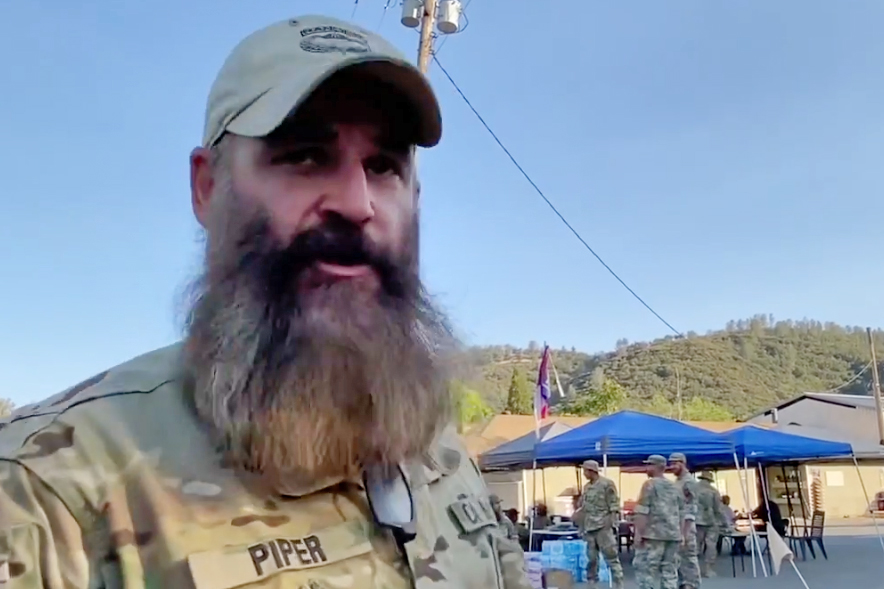 The appearance of camouflage-clad militia members in the small Sierra foothills town of Mariposa as the Oak Fire raged nearby has sparked a furor in Mariposa County, with the local sheriff’s department praising the group for its help while some residents accused the militia of exploiting the disaster.

The California State Militia 2nd Regiment — whose website features pictures of men in military fatigues, helmets and assault-style rifles preparing for “the unrest yet to come” — set up a mobile kitchen trailer from Saturday evening through Monday morning in the parking lot of a lumber store in Mariposa, just southwest of the blaze that as of Monday morning had driven nearly 4,000 people from their homes while burning almost 17,000 acres.

There are about 150 members in the militia across California, and about 20 of them, including several Mariposa-area residents and others from nearby counties and one from Bakersfield, showed up to help feed evacuees and offer other services, said militia member Daniel Latner.

“We’re part of the community,” said Latner, 44, who lives in Mariposa County and works in logistics. “We’re watching our own community burn down, and even though a lot of the members that came to help, they’re spread out, we’re all part of the same unit, and this is what we do.”

Latner estimated that his group fed about 20 families, with food including “local farm fresh eggs and goat milk,” pancakes, turkey sausage, sandwiches and fruits and vegetables. Militia members rustled up a three-horse trailer to help people evacuate livestock but didn’t end up using it, Latner said.

But not all residents were happy with the activities of the militia, which parked two large green military-surplus trucks beside their kitchen operation.

“The last thing I’m going to do is take a free tri-tip sandwich from a right-wing extremist group,” said one resident, who did not want her name used because she said she worried about provoking “armed and dangerous” people.

“We’re very angry that they would choose to come in at a time of real gravity to try to turn this into a political move,” said the woman, who works remotely as a program manager for an energy-efficiency company and accused the group of “trying to recruit people in a disaster.”

The U.S. militia movement gained a higher profile during the administration of former President Donald Trump, who received 58% of the vote in the 2020 presidential election in Mariposa County, to President Joe Biden’s 40%. Federal prosecutors have charged a leader of the Oath Keepers militia with seditious conspiracy for allegedly coordinating with members of the Three Percenters militia and the violent extremist group the Proud Boys before the Jan. 6, 2021, attack on the U.S. Capitol.

In California, militia members have become politically active, particularly in Shasta County, where retired U.S. Marine Carlos Zapata led a successful recall of a county supervisor, leading to a far-right majority on the board.

The Mariposa Sheriff’s Office on Sunday addressed public concerns and rumors about the militia. “We had received multiple notifications inquiring why we had ‘activated that militia,’ ” the office said in a Facebook post. “The militia has not been activated or requested to act for any purpose by the Sheriff’s Office or any agency working the Oak Fire.”

“We are not unsupportive of community groups helping those affected by the Oak Fire … they are acting on their own courteous accord,” the post continued. “We appreciate their efforts and any … efforts of other private groups or entities helping our community.”

The Sheriff’s Office did not respond to a request for comment Monday morning.

The California State Militia 2nd Regiment’s website calls assault-style rifles the “primary weapon” for members, who the website says are “always required to remain proficient in the maintenance and safe operation of the rifle and to have a minimum of 400 rounds of ammunition and 150 rounds per sidearm available.”

Latner emphasized that despite rumors to the contrary, members were not armed while providing services in Mariposa. The militia is intended to defend U.S. soil from foreign aggression or “if the whole world’s collapsing” and would also help local authorities if called upon to help handle any looters trying to prey on the property of evacuees from the Oak Fire, Latner said.

Founded in 2012, the militia has grown from a single “company” in Southern California to 10 across California, according to the group’s website.

Another member, who identified himself as “Major Piper Brown,” told the Fresno Bee that the group was in Mariposa solely to help the community. “We’re not racist. We’re not militant. We’re not here to overthrow the government,” he said.

Latner said he and other militia members remain “on standby” to assist people suffering fallout from the Oak Fire. “We’re just getting a little bit of a break, getting our gear cleaned up, getting showered and getting ready to move out if we can find a place we can help.”

Will Pilates make it easier for me to use the stairs? DR MARTIN SCURR answers your health questions