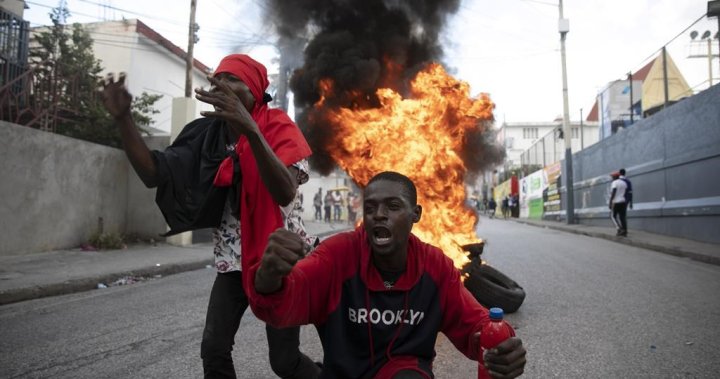 The Canadian Armed Forces airlifted more armoured vehicles to Haiti as police in Port-au-Prince struggle to contain a gang crisis.

Port-au-Prince has been held hostage for months by violent, feuding gangs who have shut down roads and essential services, leading to a resurgence of cholera.

The federal government release on the second shipment did not say which companies made the tanks, how much they cost or how many were sent. However a government official, who was granted anonymity because they were not authorized to speak publicly about the matter, said there were three tanks, including two of the same model.

Foreign Affairs Minister Melanie Joly and Defence Minister Anita Anand said in a statement that the equipment will help the Haitian National Police.

5:15
Chaos in Haiti: What is Canada’s responsibility?


Trudeau told reporters Wednesday in Mexico City, where he was attending a Canada-U.S.-Mexico leaders’ summit, that the tanks are part of Canada’s response, which also includes humanitarian aid.

In addition, Ottawa is trying to coax Haitian leaders to form a political consensus on how the West can best support the country so it can hold a credible election.

Part of that includes sanctions on high-profile Haitians alleged to have helped gangs thrive, which Trudeau claimed “have caused real response from the country’s elites in terms of allowing for greater stability.”

The U.S. has said Canada would be an ideal country to lead a military intervention but Trudeau would not specify what Washington has asked Ottawa to do.

“We’re all very aware the things could get worse in Haiti, and that’s why Canada and partners, including the United States, are preparing various scenarios if it does start to get worse,” Trudeau said.

“Right now, what is effective is empowerment of the Haitian National Police to solve the situation themselves, and support for the Haitian people,” he said.

A net-zero world could generate US$10,3 trillion by 2050, new report finds