Canadian veterans can face a ‘recipe for disaster.’ A new police program aims to help 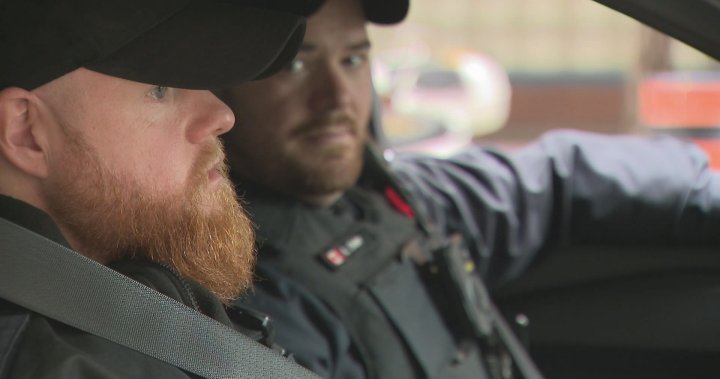 A new program to help police officers safely assist military veterans in crisis is now available to police services across the country.

Launched in September by the Toronto Police Service, the Military Veterans Wellness Program is the product of years of work by two Canadian Forces soldiers turned police constables aiming to help veterans experiencing homelessness or a mental health crisis.

‘I don’t think we value them’: More than 100 homeless veterans living on Vancouver’s streets

The program provides training to police officers so they can better respond to veterans they encounter in the course of their duties, mindful of both their military training and potential experience of severe trauma.

It also provides officers with a referral form to easily connect veterans with the host of supports they are entitled to receive, but that can otherwise be difficult to access.


“The social services that we’ve partnered with for this program have saved my life,” said Const. Jeremy Burns, one of the program’s co-founders, who knows all too well how the trauma of military service can linger long after veterans make it home.

“We lost 14 on our tour, but I lost several more when I came home,” Burns said. “I don’t know what’s more tragic.”

Burns served three and a half years with the Canadian Forces stationed in Edmonton with the First Battalion of Princess Patricia’s Canadian Light Infantry.

Many military veterans struggle in silence

After deploying to Afghanistan in 2009, Burns said he came home a different person, struggling to fit into the society he fought to defend.

“I had to really turn myself into a very different kind of person to go to war and to serve,” he said. “Being hypervigilant in a war zone is fantastic, but if I’m switched on and hypervigilant all the time at home, that’s exhausting and that really sets you apart from everybody else.”

Burns found kinship with fellow veteran Const. Aaron Dale. The pair met in 2018, when both signed their contracts to join the Toronto Police Service.

Leaving the tight-knit unit proved harder than expected, with Dale missing his colleagues and struggling to find a new purpose.

He credits Burns with helping him cope with that loss of identity and encouraging him to seek help.

“He kind of sat me down and said, ‘Hey, you’re not as good as you could be right now. There’s no shame in asking for help. Let’s ask for help,’” Burns said.

Veterans often face challenges stemming from their military service, including physical and mental health disorders, difficulties integrating into civilian life, and a reluctance to seek help, coming from a military culture that values toughness and pushing through.

A 2019 Statistics Canada report found that the transition to civilian life can be especially challenging, with 36 per cent of veterans reporting theirs as very or moderately difficult.

“They feel so detached from everybody,” said Geneviève Boudreault, a psychologist specialized in combat stress and post-traumatic stress disorder, who helped develop the Military Veterans Wellness Program.

“Add to that irritability and coping mechanisms like alcohol or drugs — that’s a recipe for disaster.”

Without support, these challenges can leave veterans out of work, struggling to manage relationships and more likely to find themselves on the street — and in some cases, interacting with police in crisis mode.

Burns and Dale soon realized that others shared their struggle and worse, as they encountered veterans in crisis while on the job — men and women who had served their country and protected others, now on the other end of a 911 call.

One of those veterans was Garett Oliver, who was living in his truck when he first met Dale while experiencing a mental health crisis.

Oliver said receiving help from a fellow veteran, who knew which resources could help him beyond his immediate crisis, was invaluable in turning his life around.

“He was able to guide me down a path that I needed to go in order to fix my circumstance in life,” he said. “I owe him and Jeremy the world for what they did for me.”

It’s experiences like those that led Burns and Dale to create the Military Veterans Wellness Program in the first place.

Burns and Dale hope that police forces across the country will take up the program, especially as more veterans who served in Iraq and Afghanistan discharge from the Canadian Forces.

Although veteran homelessness and suicide remain daunting challenges, Burns says he hopes the program will help those who served their country so selflessly get the help they need and deserve.

“No matter what struggle it is they’re struggling with, there is something available to help them,” Burns said. “We just have to get to a point where we’re all comfortable asking for that help.”

15,000 Minnesota nurses vote Wednesday on whether to strike for second time – Twin Cities