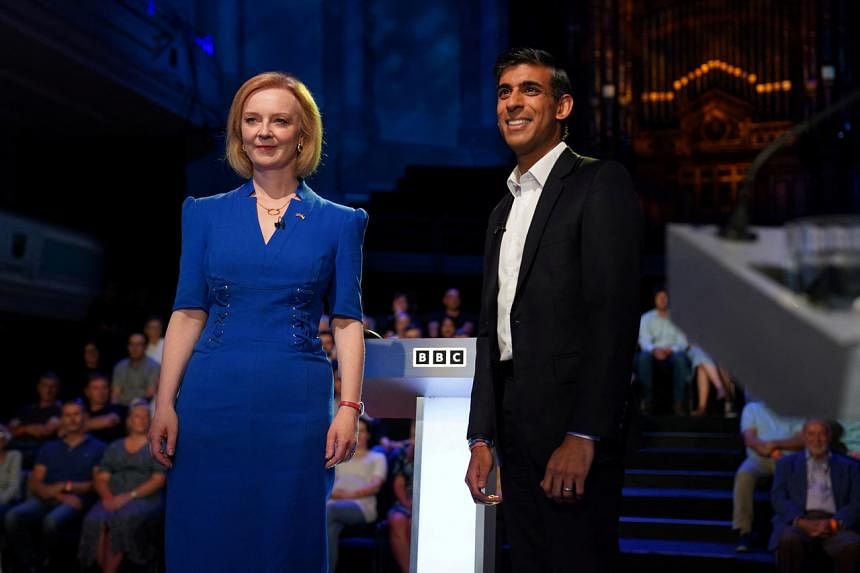 LONDON (NYTIMES) – When Mr Rishi Sunak kicked off his campaign for leader of Britain’s Conservative Party and prime minister on Saturday (July 23), his choice of venue – a tire shop in the market town of Grantham – felt almost inevitable.

Grantham is the birthplace of Mrs Margaret Thatcher, an icon of the right who looms large in every Conservative leader contest, but never more so than in these economically straitened times.

Mr Sunak and his opponent, Ms Liz Truss, are both competing to wrap themselves in the mantle of Mrs Thatcher, who was prime minister from 1979 to 1990.

Each is casting themselves as the true heir to her free-market, low-tax, deregulatory revolution at home, and her robust defence of Western democracy abroad.

“We must be radical,” declared Mr Sunak, who, like Ms Truss, served in the government of Prime Minister Boris Johnson and is responsible for some of the economic policies he now proposes to sweep away.

The agenda Mr Sunak is championing, he told the party faithful, was “common-sense Thatcherism”.

But experts on Mrs Thatcher say the candidates are cherry-picking the legacy of the woman known as the Iron Lady, emphasising the crowd-pleasing elements while glossing over the less appetising ones, like some tax increases in 1981, during the depths of a recession, at a time when she was determined to curb runaway inflation.

“When Rishi and Truss invoke Thatcher, they’re both saying something true, but neither is saying the whole truth,” said Mr Charles Moore, a former editor of The Daily Telegraph who wrote a three-volume biography of Thatcher.

“Truss is right in saying she believed in tax cuts and less regulation,” he said, “but when Rishi says she cared about fiscal responsibility, that is also true.”

While both candidates are promising to cut taxes, Mr Sunak, a former chancellor of the Exchequer, says it can only happen once inflation is tamed.

He accuses Ms Truss, who has said little about fiscal consequences, of telling “fairy tales”.

His approach echoes Mrs Thatcher’s belief in balancing the books and her dislike of borrowing, which she viewed as a burden on future generations.

Yet neither candidate seems to have the stomach to run the full Thatcher playbook.

Like them, she made her bid for Downing Street in an era of soaring inflation and labour unrest, though with much higher tax rates. Her economic shock therapy – which included a hefty increase in the sales tax – tempered inflation, but at the cost of a deep recession and mass unemployment.

It is much simpler to channel Mrs Thatcher, as Ms Truss does, in a stylistic way.

GOP’s ‘Commitment To America’ is…