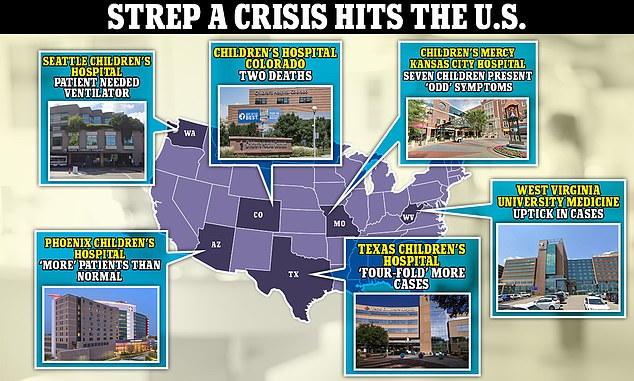 Leading US officials issued a warning about a Strep A outbreak spreading across America – a sign officials are worried the bacterial infection will continue to surge in the coming months.

The Centers for Disease Control and Prevention (CDC) issued the urgent advisory message Thursday, notifying doctors and public health authorities of the situation.

America has suffered two confirmed strep deaths as part of this outbreak, both in Denver, Colorado. Doctors at hospitals in at least six states have given anecdotal reports that cases of the infection have increased this year.

The CDC does not track Strep A at a national level, so it is impossible to know daily case figures. Across the pond, 21 children have died from the illness in the UK – and US officials fear this outbreak will reach the same levels stateside.

There have been anecdotal reports from at least six hospitals around the US that Strep A cases are either more frequent than usual this year, or more severe. Two pediatric deaths have been confirmed in Colorado as part of this outbreak. The CDC does not report real time national Strep A data 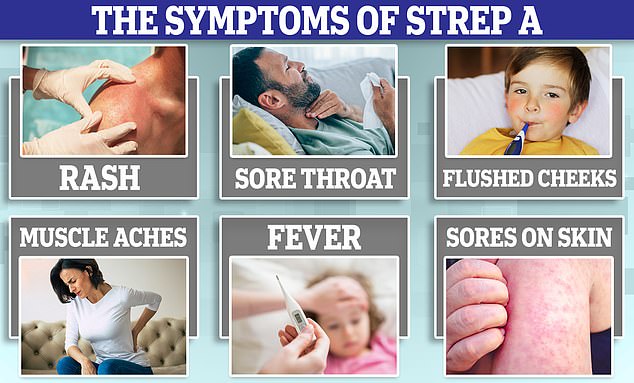 Strep A symptoms include rashes and sores around the body, flushed cheeks, a sore throat, muscle aches and fever. It is a relatively mild illness that does not cause many pediatric deaths each year 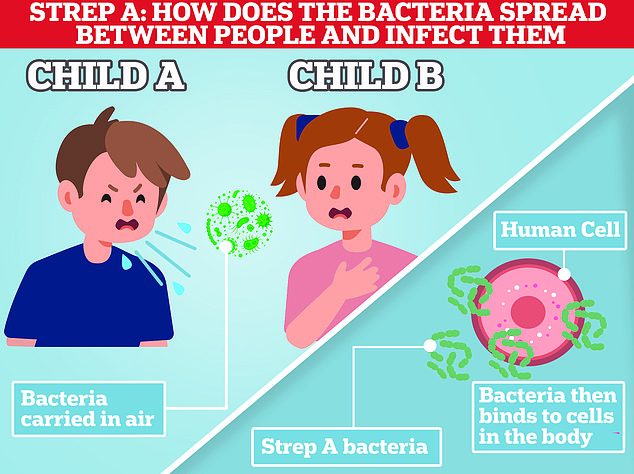 The CDC said it would be investigating the reports of Strep A cases across the country.

The agency also highlighted the ‘importance of early recognition, diagnosis, and appropriate treatment’ of Strep A in both adults and children.

Officials warn of a  recent rise in infections – and the increased seasonal risk of the disease in every age group.

Cases of both Strep A and streptococcal pharyngitis — known as strep throat — usually peak between December and April in the US.

Strep throat is seen most in children aged between five and 15-years-old.

A person can contract Strep A from someone who is suffering strep throat – another form of the infection.

Bacterial infections like Strep A are more common after viral illnesses because the immune systems has been worn down by the previous sickness – leaving them vulnerable.

The CDC warns that the elderly and the immunocompromised are at most risk from Strep A – but the infection rarely poses a risk to healthy children.

Conditions that put someone at an increased risk include diabetes, kidney disease, heart disease and cancer.

In addition, people with wounds or skin disease, as well as those who inject drugs or are homeless, are more likely to get Strep A.

Earlier this week, one of the largest children’s hospitals in Missouri reported an influx of children with bizarre Strep A symptoms.

Children’s Mercy Kansas City Hospital had seven children in recently with symptoms like a ‘stuck’ eye, lumps behind the ear and trouble swallowing – which led to drooling.

Doctors were initially perplexed by the cases – but further testing found each child was suffering from Strep A. They noted that these were not typical symptoms of Strep A infection.

Some experts feared lockdowns has robbed children of immunity from common infections, making cases of Strep A and other infections more severe that usual.

Earlier this week, the CDC admitted that school closures, mask orders, lockdowns and other pandemic orders might have contributed to the increased severity of Strep A this year.

Pandemic prevention measures like masking an school closures may have contributed to the explosion of flu and RSV cases.

In turn, these could have spurred more bacterial infections like Strep A, which often strike when the immune system is vulnerable after a viral infection.

‘We just don’t see this many together in such a short time,’ Dr Angela Myers, director of infectious disease at Children’s Mercy, told the Washington Post.

While other more serious symptoms can emerge in invasive group A Strep cases (iGAS) – eye issues and drooling are not typically associated with the infection.

Who was responsible for livable housing at Half Moon Bay farms? County officials…