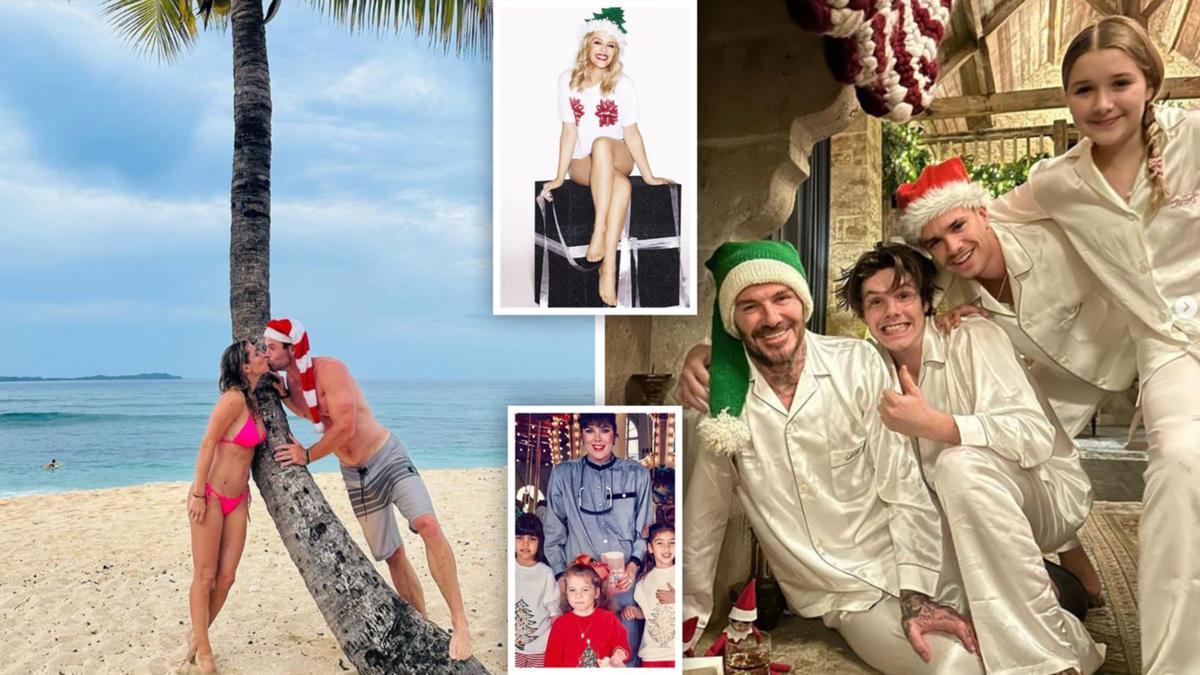 Celebrities have flooded social media to show off their Christmas celebrations, with everyone from the Hemsworth clan to the Beckhams to Lizzo happy to share what they’ve been getting up to.

Elsa Pataky, the wife of Thor star Chris Hemsworth, shared a snap of the pair smooching by a palm tree on their favourite holiday island.

But Victoria Beckham’s post seemed to come with a pointed snub for her new daughter-in-law Nicola Peltz — with Posh choosing to leave her out of a message she wrote to absent son Brooklyn.

Clad in matching silk pyjamas, all of the Beckhams posed for their annual Christmas post to fans.

But this year, something was missing from the happy family photo. David and Victoria’s eldest son Brooklyn. The 23-year-old was in the US celebrating with his new wife’s family.

David, 47, Victoria, 48 and their other three children, Romeo, 20, Cruz, 17 and Harper, 11, spent Christmas at their Cotswolds home, from where Posh posted a series of pictures on Instagram on Christmas Eve.

The former Spice Girl penned a message to the absent Brooklyn – but there was no mention of his wife with whom she was rumoured to have had a rift.

“We love and miss you Brooklyn Peltz Beckham,” she said.

On Monday, Posh posted a photo of herself with her ex-footballer husband.

She wore a white hoodie bearing the slogan “all I want for Christmas is David Beckham” and jokingly captioned the snap: “I got what I wanted this Christmas”.

Social media chef Brooklyn shared photos as he and US actress Miss Peltz spent their first Christmas together as a married couple at her billionaire parents’ home in Palm Beach, Florida.

Many other celebrities sent festive messages to followers, including three knights of rock music.

Sir Elton John, who is in the middle of his Farewell Yellow Brick Road tour which will include his final UK concerts, recorded a special Christmas thank you to his “amazing” fans for making him feel “like a million dollars” and “being so supportive”.

The 75-year-old singer, sporting a pair of glasses decorated with Santa hats, said: “It’s been probably the most successful year of my career… thank you to all of you for making me feel so special”.

Sir Paul McCartney, 80, posed underneath a sprig of mistletoe and wrote: “Have a really wonderful Christmastime – Paul”.

Sir Mick Jagger posted a picture of himself with his two dogs by his tree.

The Rolling Stones frontman, 79, wrote: “Merry Christmas and Happy Holidays to you all!!”

For her Instagram post, model Kate Moss, 48, looked over her shoulder as she sat, drink in hand, in front of a cosy fireplace.

Lizzo swapped her underwear for a cheery red onesie, while Kim Kardashian posted a throwback pic with her with her mum and sisters. Kylie Minogue posted a sexy snap of her posed on a present.