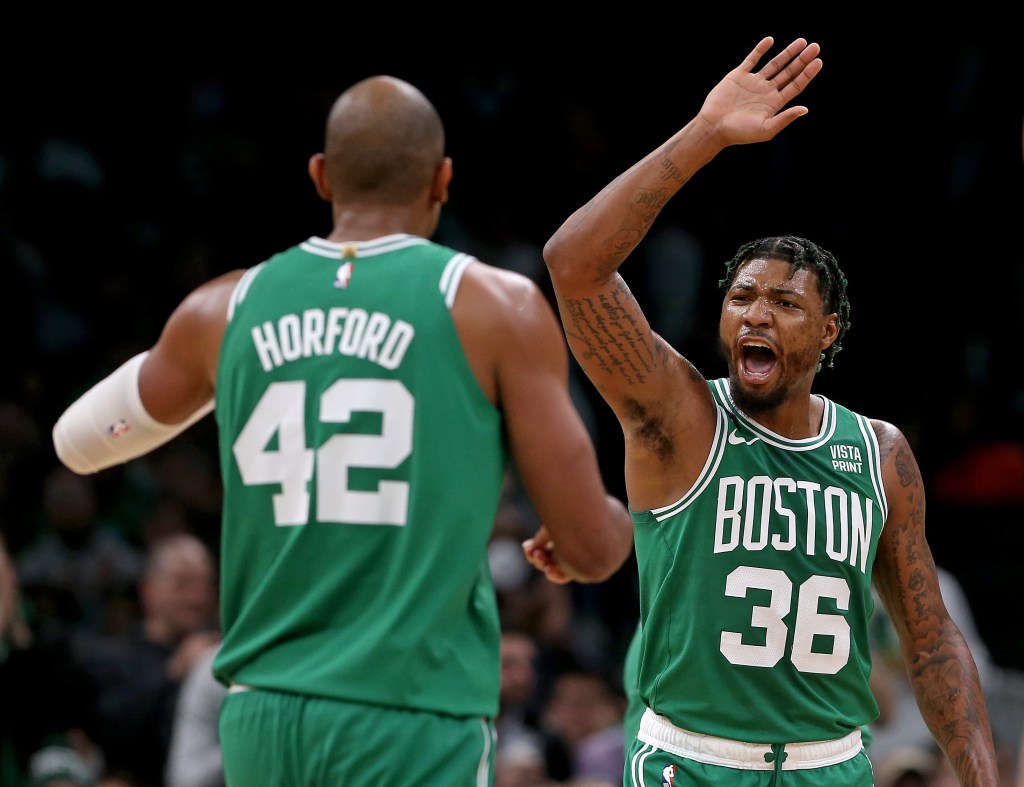 Derrick White wants to be known as a shot blocker, so when the game was on the line Thursday night, the Celtics guard showed it.

The Celtics led by three over the Clippers inside the final minute when Paul George slid by Jayson Tatum and seemingly had a clear lane to the hoop. That’s where White stepped in from the weak side, jumped off his left foot and swatted the shot off the glass. George crashed to the floor, and the Celtics were on their way to sealing a big victory.

Two weeks ago, the Celtics left Los Angeles with a sour taste in their mouths after laying a dud against the Clippers, a performance that sent the C’s on a rut that lasted almost two weeks. In the rematch, they showed the resiliency that’s been reflected in how they’ve responded from their toughest stretch of the season.

Tatum and Jaylen Brown carried the C’s for stretches as they each scored 29 points, and matched the efforts of their counterparts George and Kawhi Leonard. And it was the role players around them who closed a hard-fought 116-110 victory at TD Garden for their fourth consecutive win to end the homestand.

“I know we didn’t enjoy, none of us enjoyed what happened in LA,” Celtics acting coach Damon Stoudamire said. “And we’re all very prideful, so I knew that they were going to come back and have an edge to them. The Clippers challenged us. They’re a very good team. Championship coach, they got championship players. We had to dig down a little bit to get this win.”

Marcus Smart had 17 points and nine assists as he continued to engineer the C’s. Robert Williams looked strong again on both ends with 12 points and six rebounds in 21 minutes. Grant Williams and Al Horford had moments, too. And White had the biggest of them all to spur this impressive win.

When their stars needed some help, their teammates stepped up.

The Celtics led by five with 5:32 remaining when the tides could have shifted in LA’s favor. Brown was whistled for an offensive foul – his fifth – and Stoudamire’s challenge was unsuccessful. Brown went to the bench, but his teammates helped pick up the slack.

On the Celtics’ ensuing offensive possession, White made a strong drive to the hoop and finished a three-point play. After Reggie Jackson responded with a 3, the Celtics answered again. Tatum drew a double team and passed it to White, who kicked out to a wide-open Grant Williams who drained a 3.

“They were double-teaming JT and denying him to get the ball back, so trying to go make a play and I was able to drive and get the and-one, and get it out to Grant for the big 3,” White said. “So, just try to read the defense, JT’s getting a lot of attention, so take what they’re giving me.”

Smart then forced a turnover on George and raced in for an uncontested layup to make it a 10-point game. But the Clippers weren’t finished. They clawed back to make it a three-point game with 1:02 left on a Leonard jumper, and after Tatum missed a 3 on the ensuing play, the Clippers had a chance to tie before White came out of nowhere to swat George’s layup away.

White – who had 15 points Thursday and has scored in double figures in three of his last four games – had been slumping offensively before but seemed to regain his form and confidence as the homestand ended and the Celtics started streaking again. It re-emphasized just how important he is for the Celtics’ success this season – on both ends of the court.

“Derrick has a tough role,” Brown Sometimes they try to go at Derrick because he’s a little smaller. Derrick fights every single night. He doesn’t give up or allow teams to have a basket. He’ll fight you. So we need Derrick to continue to be confident. He’s been playing good the last couple game. Tonight I thought he played exceptional. We need him to be aggressive and shoot the ball and make plays on both sides. So a confident Derrick White only helps the Celtics.”

It hasn’t always been easy for White, who was traded at last season’s deadline and struggled to establish himself with the Celtics during their Finals run. After a summer reset, he found himself in the starting lineup and has mostly looked comfortable. After a bump in the road, he’s starting to click again.

Stoudamire can relate to the guard’s situation.

“He’s finding his way,” the coach said. “He got traded halfway through the season last year and it’s hard. I’ve been traded in February. That’s hard. It’s hard to go to a new team and I think that he’s just more comfortable. And just like any player, I think he fights being consistent but, on a team like ours, where it’s so much depth, it makes it hard, but I think tonight, you see his all around game.

“I thought he hit big shots as well as played great D. And that was a hell of a block. For me, he’s really a selfless player. And I think that’s why the guys like being around him and he’s a joy to coach.”

The Celtics had to fight for this one. They blew an 11-point halftime lead quickly in the second half as the Clippers got hot from deep, and the visitors took a narrow lead into the fourth. But the C’s stayed the course. Smart said their body language didn’t change like it did when they were slumping. They showed growth from that losing stretch and figured it out to beat another championship contender.

The Celtics know it’s a long season full of ups and downs, but the way they’ve looked after losing five of six games earlier this month is another encouraging sign as the calendar flips to a promising 2023.

“The guys responded,” Stoudamire said. “I know that they felt good about Christmas. We bounced back against Houston but tonight we really knew that we would have our hands full. And for me, I really respect the job that the Clippers coaching staff does and I have a lot of respect for those players. And I think they’re a really good team. I think we were able to rise to the occasion. Although it was the regular season, it was a good win, it was a good test for us because they kind of challenge you mentally. And I thought we stayed strong both mentally and physically.”