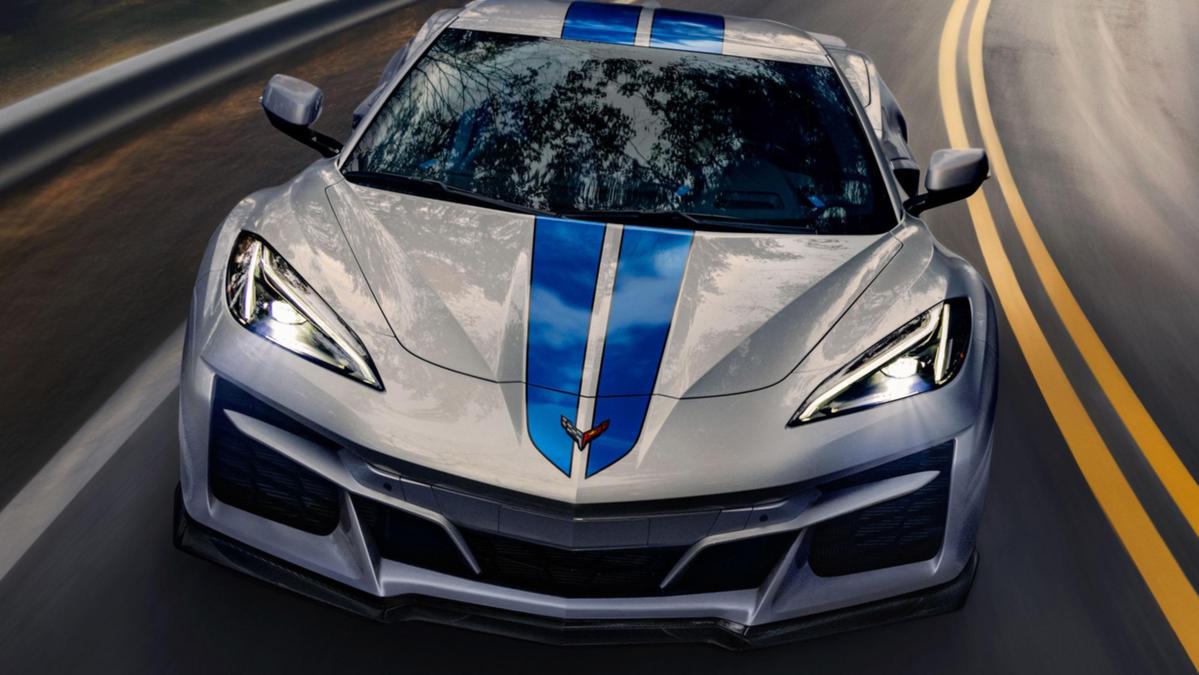 Launched 70 years after the original Corvette made its debut at Motorama in New York City, the new E-Ray has a LT2 6.2-litre V8 behind the passenger cell, and rated at 369kW at 6450rpm and 637Nm at 5150rpm. It drives the rear wheels via an eight-speed dual-clutch transmission.

This is augmented by an electric motor producing 120kW and 165Nm. It is powered by a small 1.9kWh lithium-ion battery, and drives the front wheels.

Boasting a total of 488kW, the E-Ray has a claimed 0-60mph (0-97km/h) time of 2.5 seconds, making it the fastest production Corvette of all time. Chevrolet is anticipating the car can complete the quarter mile (400m) in 10.5 seconds.

We’ve contacted GMSV to confirm if it will offer the E-Ray in Australia.

For context, the base Corvette Stingray uses a slightly less powerful 364kW/630Nm version of the same 6.2-litre V8, and is capable of completing the 0-60mph dash in around 3.0 seconds.

In regular driving the car uses the front electric motor during “spirited driving”, in low traction situations, and to enhance vehicle stability. The driver can tweak the amount of electric assistance used via one of six modes: Tour, Sport, Track, Weather, My Mode and Z-Mode.

There are also two driver-selectable drivetrain settings: Stealth, which permits electric-only driving at speeds up to 72km/h (45mph), or until more performance is required or the battery is depleted; and Charge+ that prioritises recharging the battery pack, presumably for later use on-track.

As we’ve seen in spy photos and configurator leaks, the E-Ray utilises the wider body configuration of the Z06. The aero package is largely carried over from the Z06 too, although some parts are colour-coded rather than black.

Stopping ability comes courtesy of Brembo carbon-ceramic disc brakes with six-pot calipers at the front, and four-pot units at the rear. Magnetic Ride Control 4.0 suspension with three selectable settings is standard, as is black badging and a full-length electric blue body stripe.

The E-Ray Performance App on the infotainment system can display output gauges for the V8 and electric motors, a dyno graph, or data from electrical system.

While the E-Ray will be faster than its siblings, it is also considerably heavier, so it will be interesting to see if it as satisfying to drive.

The E-Ray coupe has a dry weight of 1712kg, while the convertible with its extra structural bracing tips the scales at 1749kg.

Despite the addition of an electric motor and battery pack, the E-Ray still has a storage space available underneath the bonnet.

All 2024 model year Corvettes will be available with the Artemis Dipped interior package, which has dark green tones on many surfaces.