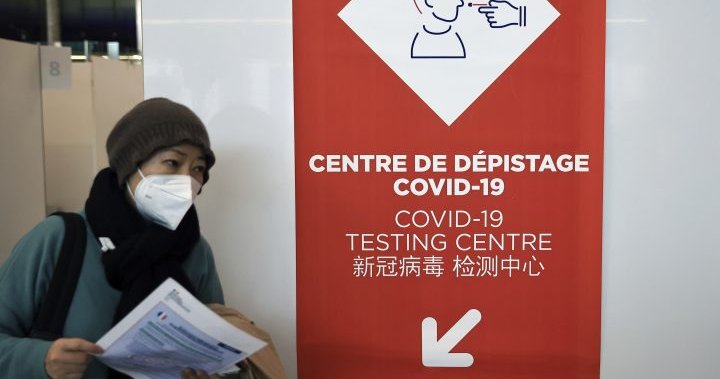 The Chinese government blasted COVID-19 testing requirements imposed on passengers from China and threatened countermeasures against countries involved, which include the U.S. and several European nations.

“We believe that the entry restrictions adopted by some countries targeting China lack scientific basis, and some excessive practices are even more unacceptable,” Foreign Ministry spokesperson Mao Ning said at a daily briefing Tuesday.

“We are firmly opposed to attempts to manipulate the COVID measures for political purposes and will take countermeasures based on the principle of reciprocity,” she said.

The comments were China’s sharpest to date on the issue. Australia and Canada this week joined a growing list of countries requiring travellers from China to take a COVID-19 test prior to boarding their flight, as China battles a nationwide outbreak of the coronavirus after abruptly easing restrictions that were in place for much of the pandemic.

Other countries including the U.S., U.K., India, Japan and several European nations have announced tougher COVID-19 measures on travelers from China amid concerns over a lack of data on infections in China and fears of the possibility that new variants may emerge.


French Prime Minister Elisabeth Borne defended the tests. Starting Wednesday, anyone flying from China to France will have to present a negative virus test taken within the previous 48 hours and be subject to random testing on arrival.

“We are in our role, my government is in its role, protecting the French,” Borne said Tuesday on France-Info radio.

The U.K. will require that passengers from China take a COVID test before boarding the plane from Thursday. Transport Secretary Mark Harper said the requirement is for “collecting information” because Beijing isn’t sharing coronavirus data.

Health officials will test a sample of passengers when they arrive in the U.K., but no quarantine is required for those who test positive, he said.

“The policy for arrivals from China is primarily about collecting information that the Chinese government is not sharing with the international community,” Harper told the LBC radio station on Tuesday.

Sweden’s Public Health Agency said Tuesday that it had urged the government to require travelers from China to present a recent negative COVID-19 test.

The statement from the agency comes as Sweden, which has taken over EU’s rotating presidency, has called a meeting of the EU’s crisis management mechanism for Wednesday in Brussels, where travel restrictions will be discussed with the aim of agreeing on a common line.

The Swedish government “is preparing to be able to introduce travel restrictions. At the same time, we are conducting a dialogue with our European colleagues to get the same rules as possible in the EU,” Justice Minister Gunnar Strommer said in a statement.


Chinese health officials said last week that they had submitted data to GISAID, a global platform for sharing coronavirus data.

The versions of the virus fueling infections in China “closely resemble” those that have been seen in different parts of the world between July and December, GISAID said Monday.

Dr. Gagandeep Kang, who studies viruses in the Christian Medical College of Vellore in India, said that the information from China, albeit limited, seemed to suggest that “the pattern was holding” and that there wasn’t any sign of a worrisome variant emerging.

U.S. to require COVID-19 tests for travelers from China as variant fears grow

Mao, the Chinese Foreign Ministry spokesperson, said that health authorities had recently held a video conference with the WHO to exchange views on the current COVID situation, medical treatment, vaccination and other technical issues, and agreed to continue technical exchanges to help end the pandemic as soon as possible.

A senior Hong Kong official also criticized the steps taken by some other countries. Some countries have applied the requirements to passengers from Hong Kong and Macao, both semiautonomous Chinese territories, as well as mainland China.

Hong Kong Chief Secretary Eric Chan said in a Facebook post that the government had written to various consulates on Monday to express its concerns over the “unnecessary and inappropriate” rules.

2:13
Canada will require COVID-19 testing for flights from China as virus surges


Some Canadian experts have questioned the effectiveness of the testing. Kerry Bowman, assistant professor at the University of Toronto’s Temerty Faculty of Medicine, said that people can test positive long after entering the country.

The requirement is “not based on science at this point,” he said after Canada announced measures last weekend.

China, which for most of the pandemic adopted a “zero-COVID” strategy that imposed harsh restrictions aimed at stamping out the virus, abruptly eased those measures in December.

Chinese authorities previously said that from Jan. 8, overseas travelers would no longer need to quarantine upon arriving in China, paving the way for Chinese residents to travel.

Denial of responsibility! planetcirculate is an automatic aggregator around the global media. All the content are available free on Internet. We have just arranged it in one platform for educational purpose only. In each content, the hyperlink to the primary source is specified. All trademarks belong to their rightful owners, all materials to their authors. If you are the owner of the content and do not want us to publish your materials on our website, please contact us by email – [email protected]e.com. The content will be deleted within 24 hours.

Coloradans still haven’t made up health care delayed during pandemic