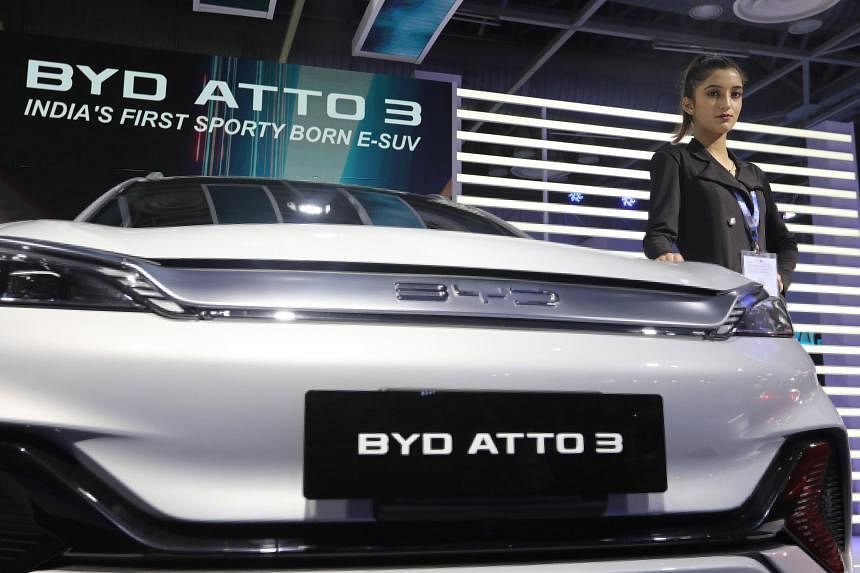 The Warren Buffett-backed BYD is seeking to capture 40 per cent of India’s EV market by 2030, Mr Sanjay Gopalakrishnan, senior vice-president of its local unit, said in an interview at India Auto Expo 2023 on the outskirts of New Delhi.

“Being a global manufacturer, we have to keep aggressive goals,” Mr Gopalakrishnan said. India is a good bet because “people are realising the need for EVs and the charging infrastructure is picking up”.

India’s switch to electric vehicles is lagging behind that of other countries such as China and the United States, hampered by high upfront costs and a lack of charging infrastructure. Still, that has not deterred foreign automakers showcasing EVs at this week’s auto show as they vie for a slice of the potentially lucrative market.

MG Motor India, a unit of China’s SAIC Motor, on Wednesday said it plans to launch three electric models by the end of 2024, while South Korea’s Kia said it plans to invest 20 billion rupees (S$326 million) in India over the next four to five years to develop electric vehicles and launch its first domestically made EV in 2025.

BYD, which entered India in 2007, will launch its third electric model, the Seal luxury sedan, by the last quarter of 2023, Mr Gopalakrishnan said. It introduced its first EV, the Atto 3 sport utility vehicle, in 2022. It is planning to sell 15,000 electric vehicles in 2023.

BYD shares surged in Hong Kong trading on Thursday, climbing as much as 9.1 per cent and extending their 2023 rally to 21 per cent.

The company’s expansion comes at a time when India is increasing scrutiny of Chinese companies. Great Wall Motor, which planned to invest US$1 billion (S$1.33 billion) in India, failed in an attempt to buy a mothballed General Motors plant after it did not get government approval to close the deal. The government is also probing MG Motor India, a unit of Chinese carmaker SAIC Motor, over alleged financial irregularities.

BYD will position itself as a global technology powerhouse to overcome the barriers of operating as a Chinese company in India and bring “confidence to customers”, Mr Gopalakrishnan said.

While India is a value-conscious market, BYD will prioritise introducing higher-priced cars to showcase its “premium” technology and then slowly work towards mass-market vehicles, he said. Mr Gopalakrishnan said consumers are no longer so price-sensitive, with 41 per cent of the 3.8 million cars sold in India in 2022 costing more than one million rupees.

The carmaker currently assembles vehicles at a plant in the southern city of Chennai. It will explore adding manufacturing facilities when demand increases in the next two to three years, Mr Gopalakrishnan said. With increased manpower and double shifts, its Chennai plant can produce 50,000 vehicles annually.

BYD has invested US$200 million in its electronics and automobile factories in India, Mr Gopalakrishnan said. Despite Prime Minister Narendra Modi’s “Make in India” push, BYD does not have immediate plans to localise production of batteries and will continue importing them. BLOOMBERG

Billed as an uprising to ‘retake power’ in Brazil, pro-Bolsonaro protests fizzle

Ford Focus gets a face-lift, but can it still weave a magic…