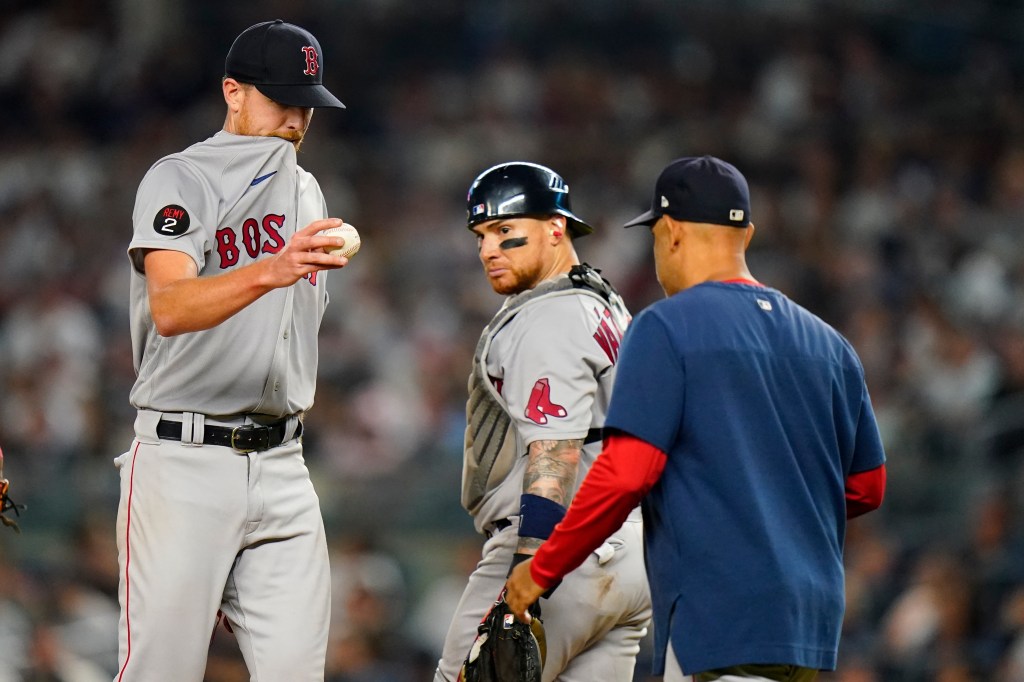 Sorry, but this can’t be how Xander Bogaerts’ career with the Red Sox comes to an end.

It doesn’t matter that Chris Sale walked off the Yankee Stadium mound holding his freshly-broken pinky high in the air for all to see. Whether or not he pitches again this year is to be determined.

If Rafael Devers was out for the year, different story. But this team is deeper than Sale. They’ve proven that. And while a healthy and effective ace of his stature – trade for one? – would’ve surely catapulted the Red Sox from Wild Card contenders to legitimate threats to unseat the Yankees and Astros as the class of the American League, it’s too late to give up on this team now.

Sure, the Red Sox limped into the first half while going 6-14 over their final 20 games and 0-10-1 in series against A.L. East opponents.

Their performance this weekend was embarrassing as they were outscored 27-3 in their final two games and struck out a season-high 16 times on Sunday.

If Sale is out for a significant time period, it’s going to be a grind for the Red Sox to outlast the Rays, Blue Jays, Mariners, Guardians, White Sox and, yes, the Orioles to capture one of the three Wild Card spots.

So be it. Baseball is a grind.

Yeah, the Red Sox got kicked in the teeth this weekend. They got shown up by the Rays and Yankees thanks largely to terrible defense, a lack of focus and some poor pitching performances.

It would be asinine to conclude that the Red Sox can contend with the Yankees and Astros right now. We haven’t seen enough to believe that’s possible.

But at this point in the franchise’s arc, as it’s coming down from the 2018 high but still loaded with talent on a roster that will cost John Henry and Co. more than $200 million this year, selling cannot be an option.

The Red Sox had two bad weeks and now the season is over? That’s not how baseball works.

If they were stinking it up in June but suddenly had two great weeks in July, we’d be talking about how this team is worth investing in.

All of them will be eligible for free agency at the end of the season, but only two of them, Bogaerts and Martinez, have proven to be healthy and performing at an elite level. Eovaldi could soon join that category, but his velocity was down in his first start after an extended layoff with back inflammation and it’s too soon to say just what his value might be.

Two-month rentals of Bogaerts and Martinez could net the Sox a few nice prospects. Would they be franchise-altering prospects? Almost certainly not.

A bigger mistake would be giving up on these guys now, turning the Red Sox into a total rebuild and making the next two months (two years, maybe?) an unwatchable mess while we’re supposed to focus more on the box scores in Worcester and Portland than the actual big league team.

Watching prospects develop into franchise stars is a fun B-plot. It’s not the A-plot.

This is Boston, not Tampa Bay or Pittsburgh.

It shouldn’t be this easy to turn a contending team in this market into a selling team.

The Red Sox asked for patience when they traded Mookie Betts to Los Angeles. They sold the fans on the promise of Alex Verdugo, Jeter Downs and Connor Wong.

Here we are, three seasons later, and all three of those guys are on the big league roster while the Red Sox are 13 1/2 games worse than the Dodgers entering the break. Prospects aren’t always better than proven big-leaguers, a lesson we learn quite often.

Bogaerts and Martinez remain two of the game’s best hitters. With Rafael Devers batting in front of them, the Sox continuously boast a two-three-four part of the lineup that is as scary as any team in baseball.

Fix the perimeters of this team. Get Trevor Story, Wacha, Hernandez and Hill healthy. Acquire an impact bat to play right field. Promote Triston Casas to play first base. Find a legitimate, game-changing pitcher in the trade market and use pieces from the 11th-ranked farm system in baseball to acquire him. Make sure he’s got a few years of team control and the Sox have a chance at being competitive in 2023, Devers’ last season under contract.

And hey, this may sound crazy, but maybe even try to sign Bogaerts to a contract extension.

The only reasonable argument to turn the Red Sox into sellers at the Aug. 2 deadline would be if they lost nine of 11 leading up to it. They’d need to look terrible, as bad as they looked this weekend, on a regular basis.

Even then, it’d be difficult.

This can’t be how the Red Sox wave goodbye to the greatest shortstop in team history.

Jenny Powell, 54, shows off her gym-honed figure in a black bikini