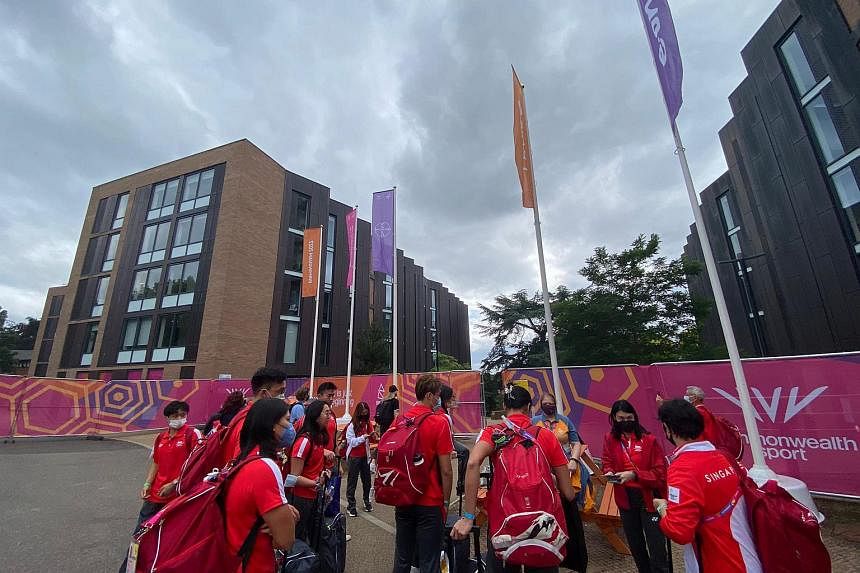 BIRMINGHAM – After experiencing some hiccups that saw them lose two massage tables and a thousand table tennis balls due to transportation issues before their pre-Commonwealth Games training camp in Linz, Austria, Singapore’s paddlers have enjoyed a smooth first day in Birmingham ahead of the competition.

The team, led by veteran Feng Tianwei, has been soaking in the relaxed vibe of the city ahead of their big assignment after touching down in the English city on Monday (July 25) evening.

Apart from adjusting to things like the lights in the competition hall, Feng said things have been good for the paddlers.

With this being her last Commonwealth Games, the 35-year-old hopes to help the team reclaim the women’s team gold they lost to India at the 2018 Gold Coast edition.

She said: “We just arrived yesterday and today we’ve looked around to see the space, it’s been good so far. It’s my fourth time at the Commonwealth Games – the previous one there was some regret because we didn’t manage to win so we are hoping to achieve that this time around.”

Things have also been relatively smooth for other Team Singapore athletes here. While initially been concerned about adjusting to the different time zone – Birmingham is seven hours behind Singapore – Teong Tzen Wei and his swimming teammates are raring to go after being well rested for two nights since they arrived on Sunday.

Teong, 25, was also happy with their accommodation at their Games Village at the University of Birmingham, where athletes have individual rooms while also having common spaces they can hang out with their teammates.

He said: “It helps staying in a village, you get to see your teammates most of the time and they’re in close proximity. It helps to take your mind off the competition sometimes, it’s a nice set-up.”

Contrary to previous editions which featured a central Games Village, there are four sites this time with different sports housed at the various locations.

For example, the Republic’s gymnasts and swimmers are staying at the University of Birmingham, while the paddlers are situated at Hilton, which is near their competition venue at the National Exhibition Centre.

This new arrangement, however, did not bother the athletes too much. Gymnast Terry Tay, who also competed at the 2014 Glasgow Games, said: “It’d be nice to have everything in one place, but my understanding of why we are split up is because it’s nearer the competition hall so it saves time on having to travel two hours back and forth to the competition.

“In a practical aspect, it makes more sense but I wouldn’t say it’s better because you see a lot of people around, each Games have their own charm.”

‘They have shown him nothing but disrespect’ – Roy Keane blasts Man…