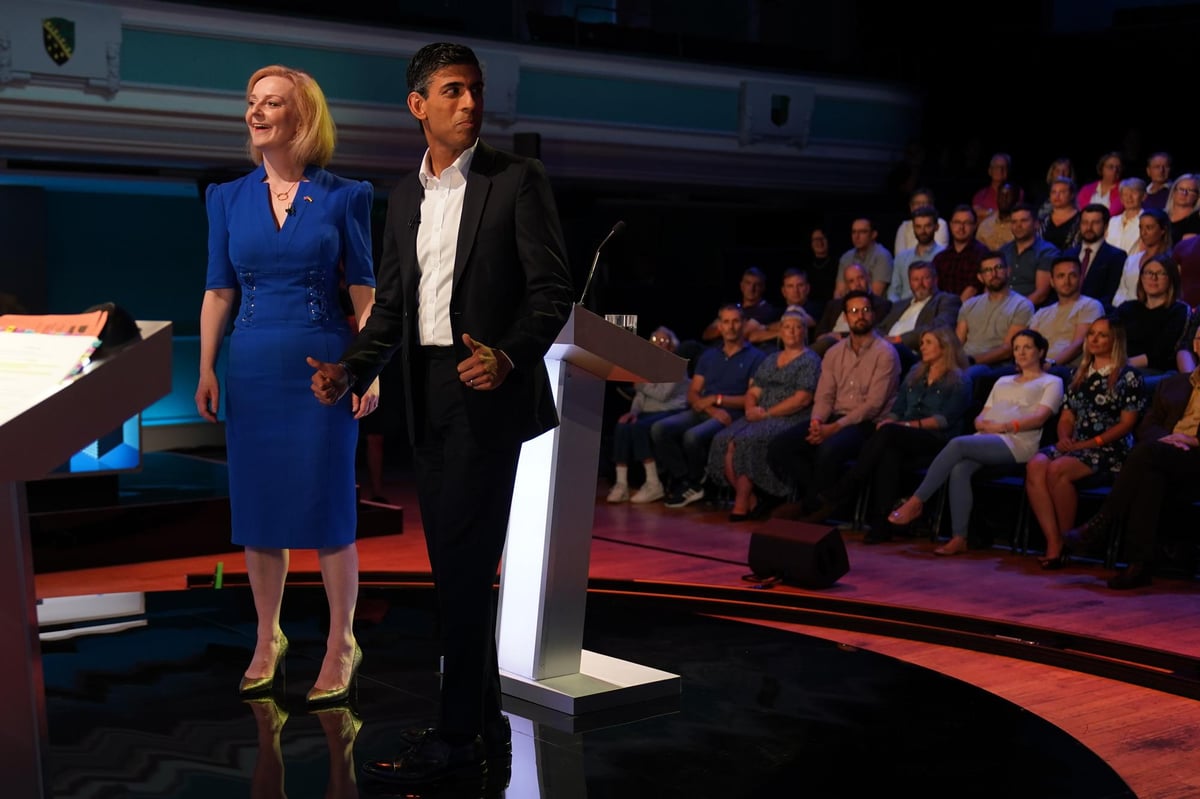 Former chancellor Mr Sunak claimed there is “nothing Conservative” about Ms Truss’s approach and it would give the party “absolutely no chance” of winning the next election.

Foreign Secretary Ms Truss in turn suggested her rival would lead the country into a recession.

We take a look at some of the fiery clash points during the BBC debate.

Ms Truss accused her leadership rival of “project fear” as he criticised her plans to cut tax – a nod to an argument from the Remain campaign ahead of the Brexit referendum.

Former chancellor Mr Sunak replied: “I remember the referendum campaign, there was only one person on the side of remain, project fear, and it was you.”

The foreign secretary then said: “Maybe I’ve learned from that.”

Ms Truss has supported the Remain campaign in 2016, while Mr Sunak backed Leave – something he has been quick to remind voters over the course of the leadership battle.

On when is the right time to cut taxes, Mr Sunak said: “Well look, we all took a decision to protect the economy and support the NHS through Covid, and of course we all knew there was a bill that we needed to pay for that, so the question is, should we pay that bill ourselves or do we put it on the country’s credit card and pass the tab to our children and grandchildren to take care of.

“Now, I don’t think that’s right, I don’t think it’s responsible and it’s certainly not Conservative and that’s what I wouldn’t do as prime minister.”

Driving growth in the 21st century is “so much more than tax”, Rishi Sunak has said.

He said during the BBC debate: “You (Liz Truss) talk about growth, I have spent my career before politics in business, not just here, but around the world.

“And if you want to drive growth in the 21st century economy, it’s about so much more than tax. It’s about bringing the change we need to make sure that our children are equipped in the digital industries.

Liz Truss said: “Under my plans, we would start paying back the debt in three years time, so I’m not putting it on the never never.”

Ms Truss said: “Rishi that is not true, under my plans, we would start paying down the debts in three years time, Covid was a one in 100 years event, no other country is putting up taxes at this moment, the OECD has described Rishi’s policies as contractionary.”

We didn’t think it would come to fashion – but the subject of clothing costs has been in the news in the last few days.

Liz Truss has failed to “disown” the remarks made by Culture Secretary Nadine Dorries on her and Rishi Sunak’s fashion choices.

“In the Conservative Party, “we judge people by their character and their actions”, Rishi Sunak said.

The debate ended with a quick fire yes/no section. Both candidates were asked

Is Brexit to blame for delays at Dover: both said no

Both also said they would ban railway strikes.

And perhaps the most controversial What score would you give Boris Johnson out of 10: Truss said seven, Sunak gave 10/10 for Brexit and the election – but cited issues at the end. The response gained some applause.

Rishi Sunak cited the “conduct side” and “different directions of travel on the economy” as reasons why he resigned as Boris Johnson’s chancellor.

On the anger some Conservative Party members feel towards Mr Sunak for his role in Mr Johnson’s downfall, he told the BBC election debate: “He is one of the most remarkable people I have met, I was very grateful to him that he gave me that job.

“And I’m proud of all the things we achieved in Government together, actually, getting the Brexit gridlock paralysis that we all remember, getting that broken, winning that election victory, helping get the country through Covid, standing up to Ukraine, those are all things I was proud to serve under his leadership and achieve.

The two Tory leadership hopefuls were asked about Liz Truss suggesting the fact she went to a comprehensive school would make her a better prime minister.

Rishi Sunak said: “My parents were part of an immigrant family that came here.

“They didn’t start with very much, but they worked day and night, saved and sacrificed to provide a better future for their three children.

“And I am nothing but enormously grateful for everything that they did for me. And I’m certainly not going to apologise for the fact that they worked hard, and they aspired to do that for their kids. And in fact, as I said before, those values, those conservative values about hard work and aspiration and building a better future for your children. That’s why I want to be prime minister.”

The Foreign Secretary said: “Winchester is a very, very good school, and I would love people for right across the country to have the opportunity to go to a school like that.

“The issue was when we had the debate last week is, I was being questioned about why I thought what I did in the past, so I was explaining my upbringing.”

DR MEGAN ROSSI: What to eat to keep your gut healthy on holiday!