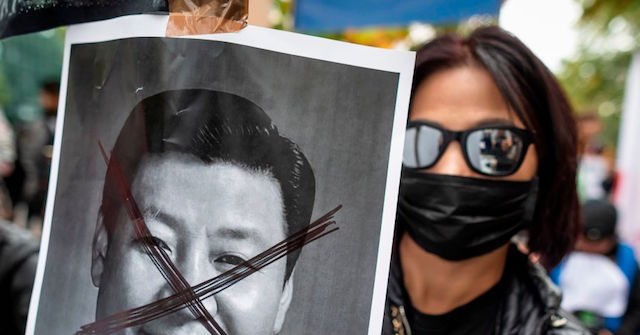 The man now widely believed to be Peng Lifa reportedly disguised himself as a construction worker to get atop Beijing’s Sitong Bridge and hang up two banners — one reading, “No PCR tests, but food; no lockdowns, but freedom; no lies, but respect; no Cultural Revolution, but reform; no dictator, but vote; no [to being] slaves, but we the people” and another reading “students strike — workers strike — people strike — dictator traitor Xi Jinping.”

The reference to “slaves” appears to be intentionally similar to the first line of the Chinese national anthem, the “March of the Volunteers”: “Stand up! Those who refuse to be slaves!” Chinese authorities have censored lines from the country’s national anthem online in the past when citizens have weaponized it to protest the seven-decade-old communist regime.

Peng also reportedly set a small fire on the bridge so passersby would be more likely to look at the banners and shouted anti-Xi slogans through a megaphone before police arrived on the scene, disappeared him from sight, and took down the banners, dispersing the crowds below.

A banner against Xi Jinping is raised at Sitong Bridge, Haidian District, Beijing.
Admire the courage of this man, but when the giant ship sank, the screams of the passengers were only the meaning of tragedy.#TheGreatTranslationMovement pic.twitter.com/tMt4spulZR

The act of brazen defiance, in the heart of the Chinese elite’s seat of power, was particularly impactful as it occurred shortly before the beginning of the Chinese Communist Party Congress, which takes place every five years and determines the leadership and priorities of the Party.

Xi is seeking a third term at the helm of the country, possessing the titles of “president,” commander-in-chief of the armed forces, chairman of the Communist Party, and nine others. No evidence indicates that Party leadership will challenge Xi. On Sunday, Xi will name the new leaders in the Politburo and other key positions, mostly replacing officials who have reached retirement age or are term-limited.

Xi made his debut at this year’s Congress with a two-hour speech on Sunday attempting to assure the world that the economic devastation brought about by his insistence on city-wide lockdowns to fight the Chinese coronavirus pandemic was limited and China was still the defining world power. Substantially undermining his claims, the Chinese National Bureau of Statistics abruptly, and inexplicably, refused to publish its GDP report immediately before the Congress began.

Peng’s banner was heavily censored on China’s government-controlled social meida outlet Weibo and reports of several other individuals being arrested for sharing the message have surfaced. Nonetheless, news.com.au, citing the dissident site VoiceofCN, reported that “Peng’s message has since popped up in at least eight Chinese cities, including Shanghai, Beijing, Shenzhen and Guangzhou.” Many instances of the banner’s message appearing in public have occurred in public bathrooms, one of the few kinds of places the Communist Party has not flooded with surveillance equipment.

Chinese internet users shared a variety of photos from the cities listed on Weibo showing messages against Xi and communism generally in bathrooms, prompting another wave of censorship online and reports that the Party is sending police officers into bathrooms in an attempt to subdue the silent protests.

You never know where is the #CCP’s new bottom! They are now having cops watch people in the public restrooms after many people started writing slogans on the walls of restrooms, slogans similar to the one on #SitongBridge by #Bridgeman #PengLifa #PengZaizhou. “Remove #XiJinping!” pic.twitter.com/n7zMYlAf39

Attempts to censor the Beijing bridge banners have largely failed, “and other protest signs have since appeared,” Voice of America reported on Thursday. “Due to the dense coverage of surveillance cameras in China, however, most of them have been found in public bathrooms and locations without closed-circuit TV monitoring.”
At least one high-profile arrest has occurred in response to Peng’s messaging. Radio Free Asia (RFA) reported on Monday that a retired teacher identified as Gu Guoping was arrested and held incommunicado for sharing photos and other content related to Peng’s protest, helping spread the message faster that Party censors could mute it. He also reportedly shared some of the images of the bathroom stall graffiti, which were reproduced following their censorship in China by dissidents abroad.

The dissident site China Change, which offered some of the known biographical details regarding Peng, also reported that some have suggested that over half a million accounts on the Chinese communication application WeChat have been blocked for sharing the Peng protest.

“A journalist reported that his account was suspended for 60 days for merely saying ‘I’ve seen it,’” China Change reported.

Voice of America noted on Thursday that WeChat has blocked searches for Sitong Bridge and even words like “warrior,” which were used favorably to praise Peng in the aftermath of the protest.

The Beijing display was the latest in a series of mounting protests and evidence of civil unrest nationwide. In Shanghai, the nation’s largest and wealthiest city, residents protested – some engaging in violence with public workers – during the weeks of lockdowns in April that threatened to starve out residents, as many protested that the city did not offer sufficient food and medical supplies. In June, central Henan province was the site of a giant protest in response to banks there not allowing residents to withdraw money, a symptom of a greater housing crisis caused by contractors failing to build promised new homes as the pandemic rolled on.

Millions of households ‘cannot afford their heating’ as cold…