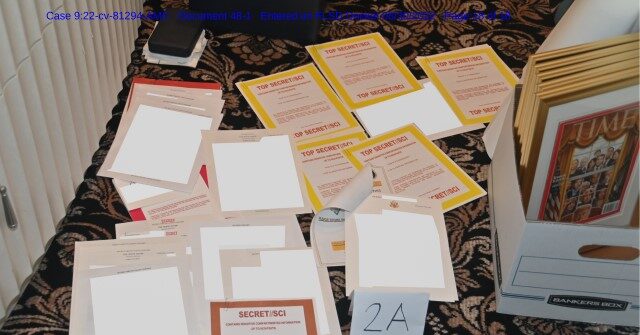 A federal appeals court on Thursday ruled that U.S. District Judge Aileen Cannon did not have the legal authority to appoint a special master to review the documents the FBI seized during the raid of former President Donald Trump’s Mar-a-Lago estate.

The 11th Circuit judges issued their decision after Trump’s lawyers and government lawyers presented oral arguments in front of the court last month.

During oral arguments, government attorney Sopan Joshi called the decision to name a special master an “intrusion” on the executive branch.

But James Trusty, an attorney for Trump, said the special master appointment didn’t significantly hamper the government’s criminal probe. Trusty said the search of Mar-a-Lago was conducted in a “carte blanche” manner, with agents taking personal items including golf shirts and a photo of singer Celine Dion.

In their opinion, the judges rebuked a central part of the argument by Trump’s legal team: that the Presidential Records Act allowed Trump to categorize presidential documents as personal ones, creating the need for a special master to determine whether personal documents should be shielded from investigators.

The ruling comes as special master Raymond Dearie was expected to finish his review of the documents this month. Of the more than 13,000 seized by the FBI, roughly 100 of them were reportedly marked classified.

The 11th Circuit judges noted the “extraordinary” nature of the raid on Trump’s estate, but said, “not in a way that affects our legal analysis or otherwise gives the judiciary license to interfere in an ongoing investigation.”

A Trump spokesman called the court’s decision “purely procedural” and said it is “based only on jurisdiction.”

“The panel’s decision today is purely procedural and based only on jurisdiction,” a Trump spokesman said in a statement. “The decision does not address the merits that clearly demonstrate the impropriety of the unprecedented, illegal, and unwarranted raid on Mar-a-Lago.”

The 11th Circuit’s decision also came just weeks after Attorney General Merrick Garland appointed Jack Smith, a government attorney who, as Breitbart News detailed, has a history of botched prosecutions of leading political leaders, to serve as special counsel to oversee the U.S. Department of Justice’s investigation into Trump’s handling of White House documents after his presidency.