Crimea explosions: one dead after series of explosions at Russian base 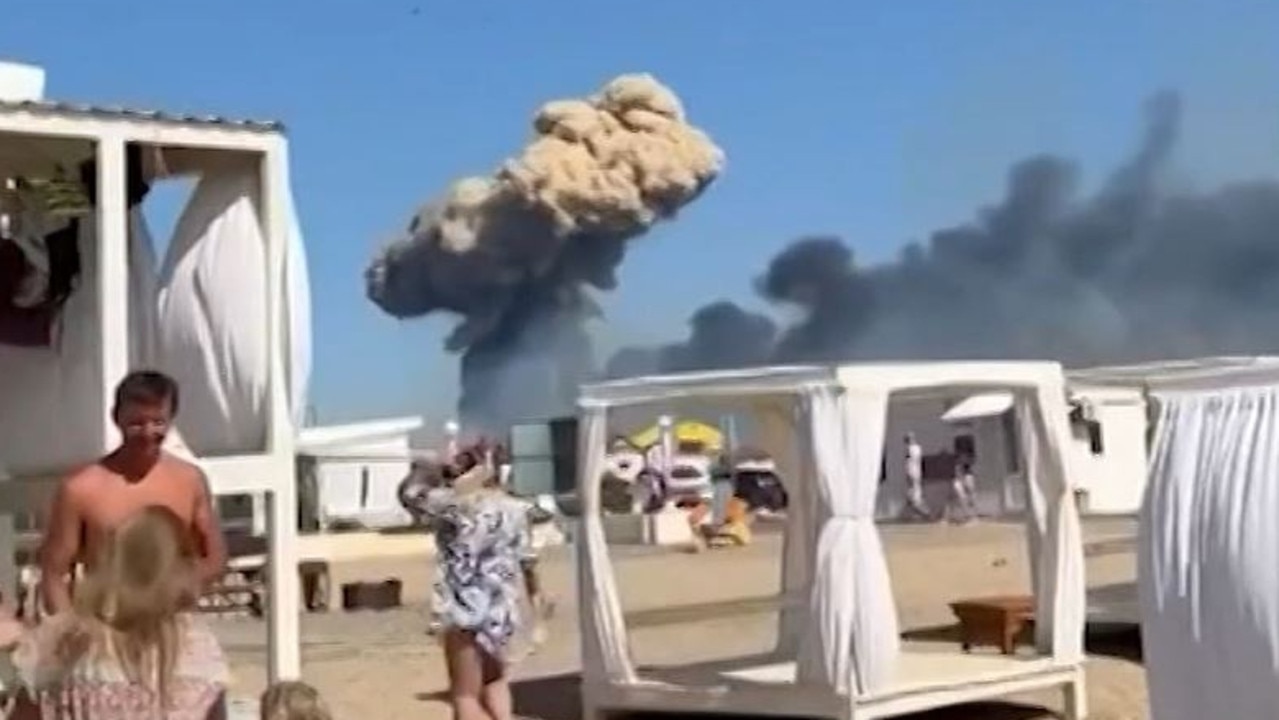 Mystery surrounds a series of explosions at an ammunition dump in Russian annexed Crimea, part of the sovereign territory of Ukraine, which killed one person.

Moscow took control of Crimea in 2014 and has been using it as a base for its current invasion of Ukraine.

Crimea borders the southern Ukrainian region of Kherson — now controlled by Moscow. The southeastern region of Zaporizhzhia — partially occupied by the Russian army — is also nearby.

Dramatic amateur footage shared on social media appeared to show panicked holiday-makers fleeing a nearby beach with young children as the explosions occurred.

There has been speculation that Ukrainian forces may have targeted the weapons depot. Kyiv has rarely attacked Crimea during the conflict.

Russia, however, has downplayed the possibility that the site was hit by Ukrainian fire.

The explosions appeared to come form Saky military base near Novofedorivka on the region’s western coast, reported the BBC. The base was formerly in Kyiv’s hands but was seized by Moscow on 2014 and is now used to attack Ukraine.

Whether it was an attack or not, the explosions will be an embarrassment to Vladimir Putin that one of Russia’s key bases has been damaged.

Reuters reported that there were at least 12 blasts at the base which happened at 3.20pm local time (10.20pm AEST).

The Russian defence ministry said it was looking to establish the reason for the explosions. It said “several aviation munitions detonated” at the base.

Officials initially said that no one had been hurt but the region’s head Sergei Aksyonov later said that one person had died as a result of the blasts.

Earlier on Tuesday, the region’s top health official said that five people including a child had been injured.

Thirty people from Novofedorivka had been evacuated.

Mystery about cause of explosions

Kyiv has not take responsibility for the blasts. But Ukraine’s deputy Prime Minister Iryna Vereshchuk said on social media network Telegram that “today’s explosions in Novofedorivka are another reminder of who Crimea belongs to. Because it is Ukraine”.

However, Russian news agency RIA Novosti said it had spoken to a source that said the cause was “a violation of fire safety requirements” and there were “no signs, evidence, and even more so there are no facts of intentional impact” to attack the base.

Footage on social media showed holiday-makers left the local beach in panic as large plumes of black smoke billowed into the blue sky. Some grabbed what they could as the smoke rose above beach cabins. Cars rushed to leave Novofedorivka, as ambulances were sent to the scene.

In an earlier video statement, Mr Aksyonov, speaking from the scene, said the affected area had been cordoned off.

“All necessary measures have been tightened to ensure the safety of infrastructure facilities and the population,” he said.

Ukraine’s army, which for months pleaded for long-range artillery from Western allies, has been hitting targets deeper in Russian-held territory since some started arriving in recent weeks.

Kyiv has also taken credit for several acts of sabotage inside Russian-held territory.

Moscow seized Crimea from Ukraine in 2014 the wake of massive nationwide street demonstrations that led to the ouster of a Kremlin-friendly president.

Those protests precipitated fighting between the army and Moscow-backed separatists in eastern Ukraine, which would lay the groundwork for Moscow’s full-scale assault on February 24 this year.

The invasion has left thousands dead, forced millions in Ukraine from their homes, and led to a deep rupture in economic ties between Russia and the West.

Rishi Sunak: Tories will be ‘hammered’ by voters if they cut tax for rich while millions suffer