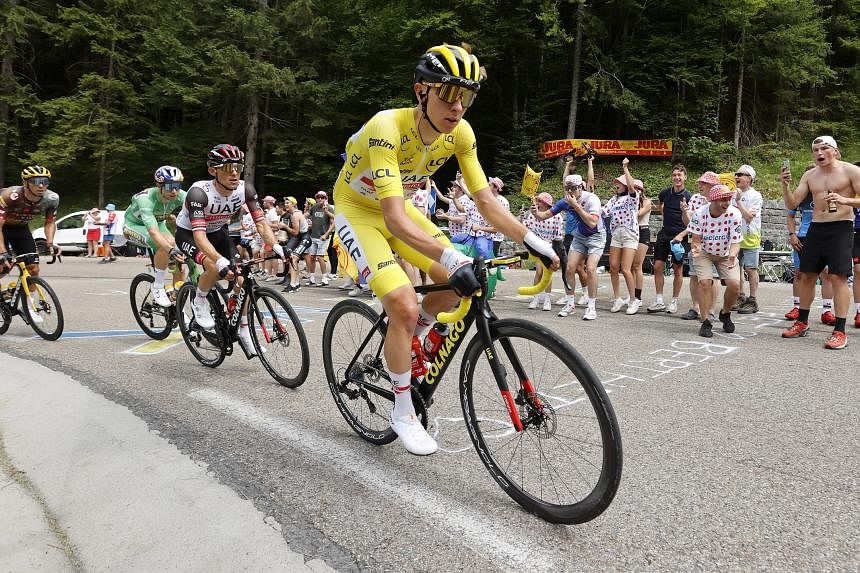 LAUSANNE (AFP) – Defending champion Tadej Pogacar said on Saturday (July 9) he fears that Covid-19 could wreak havoc on this year’s Tour de France after the Slovenian tightened his grip on the leader’s yellow jersey after stage eight.

The peloton left Dole in the Jura region under a cloud after Norwegian Vegard Stake Laengen from Pogacar’s UAE team and Frenchman Geoffrey Bouchard of AG2R tested positive and were withdrawn.

Pogacar admitted the outbreak was a real worry and speculated perhaps roadside fans screaming encouragement could be a vector for the virus.

“It’s a big scare, the pandemic is still there with us, and we can’t risk racing with it,” said the 23-year-old two-time defending champion.

“We get tested every two days or so but Vegard got ill during the night, really, it’s worrying. All the fans packed tight on the roadside and shouting, sometimes you think maybe this is a source,” he continued.

“He’s the train of our team,” the Slovenian continued of Stake Laengen.

“The big guy who leads us out, but I think we can make it to Paris without him.”

Van Aert, of the Jumbo team, won on a late incline ahead of Australia’s pre-stage favourite Michael Matthews with Pogacar just behind.

This was a second stage win for van Aert, who also came second three times during the opening stages in Denmark, and extends his lead in the sprint points standings to 264pts ahead of Quick Step’s Fabio Jakobsen on 149 and Pogacar, 128.

Van Aert’s chief rival Mathieu van der Poel fell off the back of the peloton before the attack.

“It would have been more prestigious to beat Mathieu too, but I can only beat who is there,” said van Aert, who alongside Pogacar is the big star of this 2022 Tour de France.

Pogacar also took a four-second bonus for his third place and extends his overall lead on Jonas Vingegaard at the top of the rankings to 39 seconds.

After the Covid withdrawals, cowbell ringing roadside fans cheered the pack along the way to the Swiss border where they caught a glimpse of what is to come with the Alpine mountains rearing into view on the horizon.

An early fall caught Pogacar and third placed Geraint Thomas, while French climber Thibaut Pinot not only fell twice but also took a smack on the nose when a roadside food bag distributor got things badly wrong.