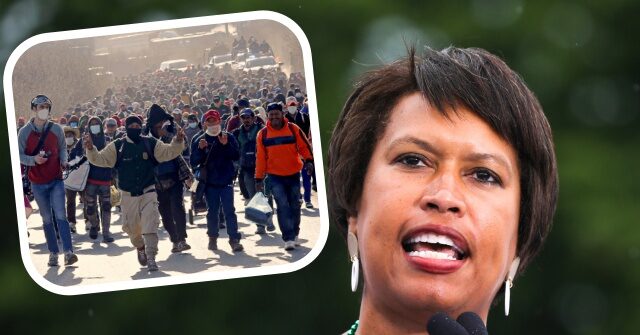 “So it’s been said, but it’s worth reiterating, that the governors of Texas and Arizona have created this crisis,” Nadeau said on Thursday as the governors have sent migrant buses to Mayor Muriel Bowser’s (D) D.C.

“And the federal government has not stepped up to assist the District of Columbia,” she continued, as President Biden’s Pentagon has rejected requests to activate the National Guard to assist the nation’s capital.

“So we, along with our regional partners, will do what we’ve always done. We’ll rise to the occasion. We’ve learned from border towns like El Paso and Brownsville. And in many ways, the governors of Texas and Arizona have turned us into a border town,” Nadeau lamented. “We don’t know how long this will take to resolve.

“We don’t know how long they will continue busing, and so the right thing to do here is to be prepared to ensure we can greet every bus, we can get people off on the right foot, we can get them where they want to go, and that will ultimately help them in their immigration process,” she added.

Her remarks come as Mayor Bowser declared a public emergency over migrants being bused in from Texas and Arizona. The declaration “establishes a Migrant Services Office within the Department of Human Services (DHS) and directs the Director of DHS to provide temporary services and supports to migrants arriving from the southern border states.”

All of this comes despite the fact that Bowser stands as a longtime supporter of sanctuary city policies:

“I will not let the residents of DC live in fear. The District is and will continue to be a sanctuary city.” https://t.co/L1IHuWhfE6

DC is a sanctuary city.

Clearly the flyer is meant to scare and divide our residents.

We have been in contact with @DCPoliceDept and @DCDPW to have them removed. [2/3]

“Washington, DC is a sanctuary city. We protect the rights and humanity of all our residents, and our #DCValues and our local culture are guided by a celebration of diversity and inclusivity.” #thread

According to the Washington Post, “more than 230 buses carrying nearly 9,400 migrants, including families with young children, have arrived in D.C. since Texas Gov. Greg Abbott (R) began offering free passage to the nation’s capital in April, with Arizona Gov. Doug Ducey (R) following suit in May.”