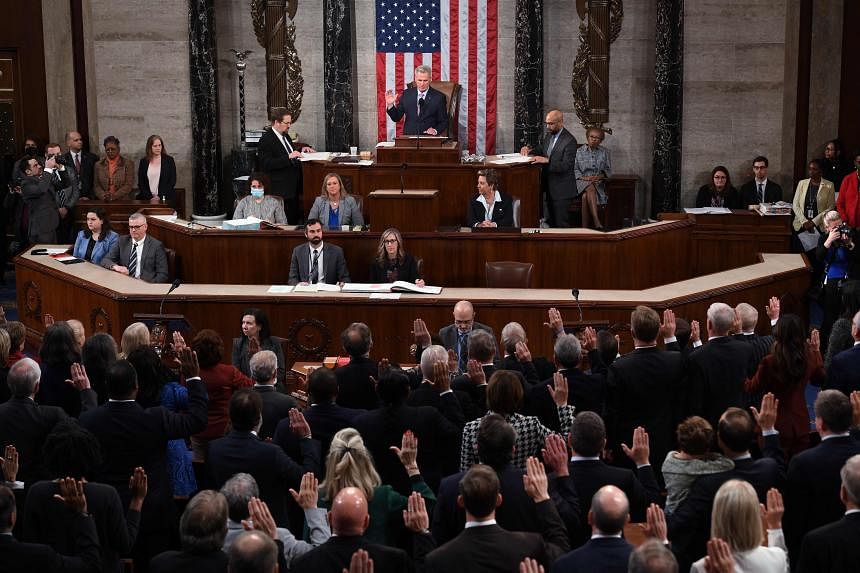 WASHINGTON – The United States House of Representatives elected Republican Kevin McCarthy as Speaker early on Saturday morning, ending a four-day stalemate triggered by a mutiny of hardliners in his own party.

But the narrowness of Mr McCarthy’s victory, and the gruelling negotiations and extensive concessions he made to get there, signalled a worrying two years of political dysfunction for Washington.

The chaos over the choice of Speaker – the very first order of business for any new Congress – promises even tougher battles and brinkmanship ahead over crucial legislation such as raising the debt ceiling.

There was drama aplenty on Friday, with two Republican lawmakers nearly coming to blows on the House floor at one point as tempers ran high over the impasse.

Mr McCarthy struggled to get enough votes to take the top post, finally winning over most of the roughly 20 holdout Republicans on Friday by agreeing to curtail the power of his speakership, among other compromises.

But in the 14th round of voting, which took place close to midnight, he fell short of victory by one vote as congressman Matt Gaetz continued to refuse to vote for him.

As stunned lawmakers walked over to Mr Gaetz to cajole and plead with him to change his mind, cameras captured a confrontation between him and McCarthy ally Mike Rogers, who lunged at Mr Gaetz before being restrained and led away by a fellow Republican.

Former president Donald Trump also made phone calls to several Republican holdouts to convince them to back Mr McCarthy, as the night wore on.

Mr McCarthy finally eked out the barest of victories in the 15th and final round of voting, winning by 216-212 after six Republicans chose not to vote for him or any other contender.

The final ballot concluded just after midnight, ending the House’s institutional paralysis and its longest contest for the top post in 164 years – but signalling the start of what will be a fractious Republican majority and a hamstrung House.

In his inaugural speech as Speaker, Mr McCarthy promised he would counter the Biden administration, saying: “Our system is built on checks and balances. It’s time for us to be the check and provide some balance to the President’s policies.”

He vowed to bring down “wasteful Washington spending”, secure the US-Mexico border, and set up a bipartisan select committee on China to bring back American jobs, among other priorities.

However, Mr McCarthy will struggle to marshal a deeply divided Republican party, in which far-right dissenters now have plenty of leverage.

Putin ‘has moved his war focus to Nato and the West’, says EU official