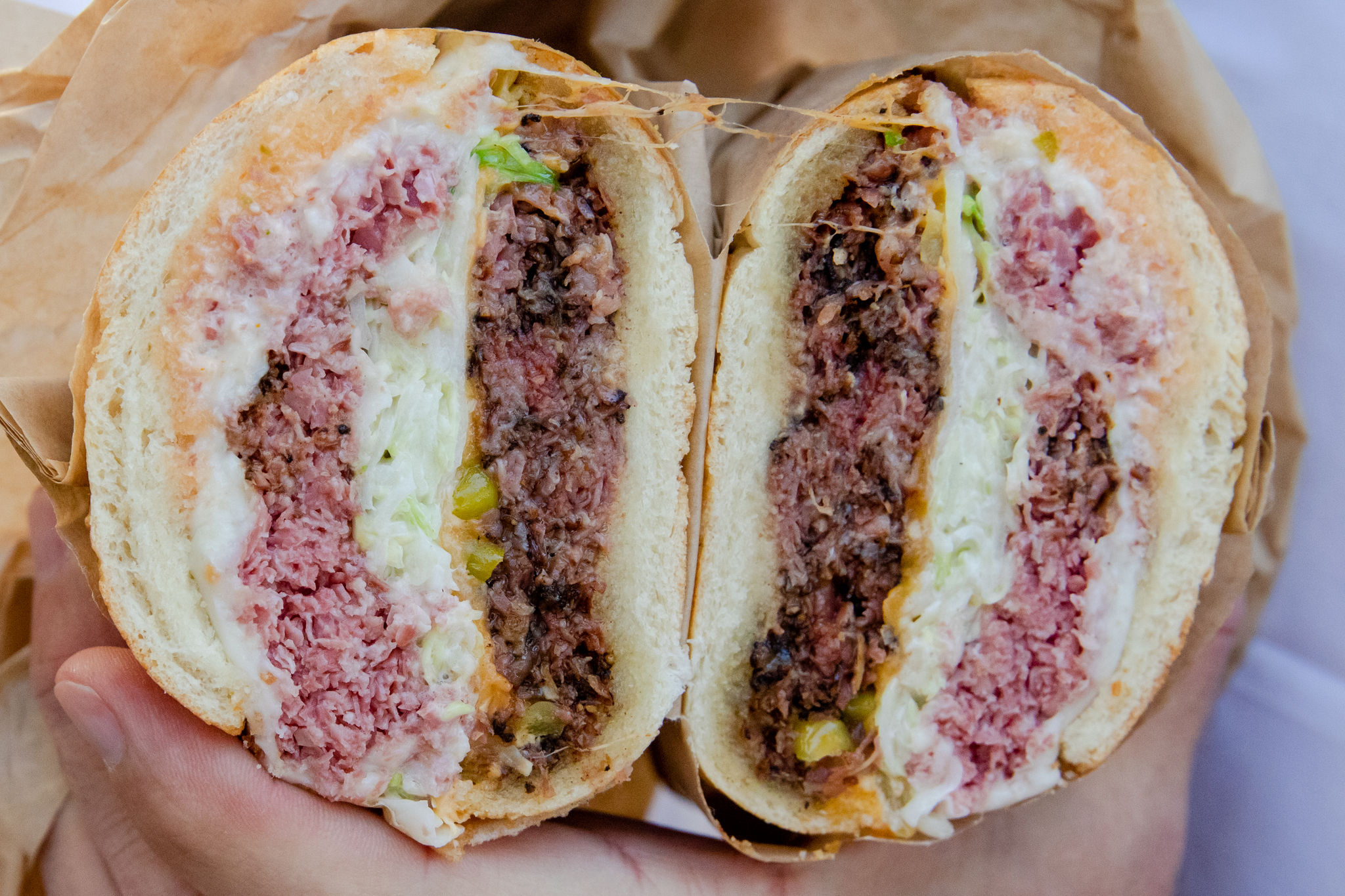 There are many titles Adam Mesnick has given himself over the years — a saucier, a sandwich expert, a food nerd — but the moniker he fancies most is “Chairman of the Board.” It’s a name he doesn’t take lightly either, considering he’s the owner of Deli Board, one of San Francisco’s most eminent sandwich shops.

Mesnick’s self-acclaim can be spotted on Deli Board’s website and even his email signature. The name might sound zany, but it’s a personal reminder of the sandwich savant’s professional journey.

“‘Chairman of the Board’ is the best title. … I gave myself that name probably in the beginning,” Mesnick said. “It was on my very first business card from Deli Board. It’s an ode to my exit from boardrooms into the kitchen.”

In a past life, Mesnick worked in the finance world, where he sold wholesale mortgages. But as fate would have it, Mesnick made a drastic career shift when Deli Board officially launched in 2010 and moved to its current home at 1058 Folsom St. a year later.

On a recent warm Tuesday afternoon, I found the Chairman at the main entrance taking customer orders. A growing line queued up while a group of customers waited for their lunch. One by one, guests requested the Allison, a Deli Board top seller that’s named after Mesnick’s mother.

Mesnick prides himself on that sandwich, whose cross-section brings to mind a butterfly, he said. When the halves are split open, the sandwich reveals layers of cheddar cheese, brown mustard, pepperoncini, corned beef, coleslaw, provolone and pastrami on a freshly baked French roll.

“The Allison has the best display of artistic technique, time, energy and care that goes into my food,” Mesnick said. “I think it’s some of my best work. The way that [my sandwiches are] designed is very important.”

The artistic technique behind the Allison starts with brisket-cut corned beef that’s boiled for three hours and then chilled until it’s ready to reheat for sandwich prep. Mesnick said it’s the most delicate meat he makes and that it’s made in “an old Jewish deli method” — minus one pivotal step. Mesnick cuts the corned beef before boiling, rather than leaving it whole as many traditional Jewish delis do.

“We’re trying to retain all of the flavor, the fat, and the juiciness,” Mesnick said. “The combination of a nice thin slice, and then heating after it’s sliced, creates an experience. I don’t think there’s anybody who does it better than my staff. What makes Deli Board very special is that we use a lot of the same products that other people have used in the past, but I’ve changed the way that they’re presented and served.”

His other top sellers include the Carzle, a pastrami and brisket sandwich, and a decadent meatball sub that he puts on his specials board from time to time. The meatball sub is inspired by a recipe he learned while working at Giovanni’s Ristorante in Cleveland. At Deli Board, Mesnick prepared a 15-pound mixture of veal, pork and beef plus other ingredients to create about 70 to 80 meatballs. (There are three giant meatballs per sandwich.)

“I firmly believe it’s the holy trinity to a good, delicious meatball,” he said.

When it’s my turn in line, I ordered the Allison, which is priced at $23, plus tax. Deli Board’s prices aren’t exactly cheap and range from $18 to $23. Mesnick knows his prices are high, but he justifies the price point based on the quality ingredients he uses. More importantly, he wants to make sure his staff can make a livable wage in such a high-priced city.

Since 2020, Deli Board has operated as a to-go-only sandwich hub. The former dining area is sectioned off and cleared of tables and chairs. What’s left are relics of Deli Board’s past with sandwich photographs hoisted on giant clipboards and bold red letters perched over the exit that read “CLEVELAND” in all caps.

A large, funky-dyed cloth is secured on the wall behind the deli’s original counter. Mesnick lifts the drape to reveal the former brown paper menu shielded underneath. Sheets of papers are stacked neatly, one over the other, like a time capsule safeguarding Deli Board’s hefty menu offerings through the years.

Changes for Deli Board and SoMa

COVID-19 brought on hard times for Deli Board and other surrounding SoMa and FiDi restaurants, but Mesnick said it forced him to shift his business model for the better. In fact, he thinks Deli Board runs more efficiently and is more profitable than it was before the pandemic. Getting rid of indoor dining has likewise helped his team focus more on the food and less on cleaning up after guests.

“COVID brought some pretty apocalyptic times and interesting scenes in the neighborhood,” he said. “The slowdown of COVID gave my staff the opportunity to learn more, to get better, to practice. The interior becomes less important. Servicing the people on the outside of my restaurant is a whole lot easier while servicing my people.”

Deli Board’s Instagram has shown some of Mesnick’s best work in addition to the Allison and has also given customers a glimpse of Mesnick’s huge personality. There’s up close, detailed sandwich shots as video posts, for example, that resemble comedic skits. Mesnick records sandwich content off Folsom Street, where he’ll often take a hit, exhale a cloud of smoke and enthusiastically proclaim, “Welcome back to the San Francisco fog zone. Here’s the deal folks, we’re getting beefy!” as seen in a July reel.

Mesnick also runs a separate Twitter handle called @bettersoma where he’ll share daily photos and videos of homeless persons with mental health issues or drug addiction. His account has been met with mixed reviews; some followers say his posts help shine a light on the city’s drug epidemic, while others condemn his account for being voyeuristic and exploitative of homeless people.

“I often wonder as I’m ridiculed boycotted and name called for my citizen journalism,” Mesnick wrote on a recent tweet accompanied by a video of a homeless man, wrapped in a blanket. “Is it me. What am I missing. Am I uninformed? These are my life experiences and daily sights.”

Mesnick maintains that the account is meant to raise awareness and put pressure on city officials to create change. “It breaks my heart to see the lack of support homeless people receive locally, and especially in SoMa,” he told SFGATE.

‘It runs through my veins’

For the bulk of his life, Mesnick had gigs within the hospitality industry, decades before Deli Board became an institution. His earliest memory of being in the kitchen was in the early 1970s, when his grandmother called him over and taught him how to use a sizzling wok. He said he was 3 years old at the time. When he was 6, he started bussing tables at his stepfather’s restaurant in Cleveland.

Mesnick grew up a “latchkey kid” with his parents often working long hours. After school, he’d come home and prepare a sandwich before turning on PBS and catching chef Martin Yan on “Yan Can Cook.” In hindsight, he said he wished his parents were home more, but he recognizes that his formative years helped fortify his understanding of the kitchen. Mesnick later took front-of-house positions at restaurants throughout high school and college, but whenever he could, he’d tiptoe into the kitchen prep area and observe the chefs in action.

“I had a fascination with the kitchen, food combinations and cooking,” Mesnick said. “I come from a long line of very talented Jewish women cooks.”

So how did Mesnick end up in finance years later? The short answer is by accident. After graduating from college, Mesnick returned home to Cleveland at a time when he was scrambling to find a job. Eventually, he packed his bags for San Francisco in the late 1990s and sold mortgage loans for a living until he lost his job on the verge of the Great Recession.

When he lost his job, Mesnick already had developed a talent for cooking and decided to turn his hobby into a newfound career. He cashed in his 401(k) and started working in a commercial kitchen on Howard Street, where he made wholesale sandwiches, soups and salads at the now defunct Harvest and Rowe and Momi Toby restaurants.

“I had a lot of familiarity with the hospitality industry and I was so eager,” he said. “I wanted in. I’m one of those people that needs to be in a restaurant — it runs through my veins. I was going to find a way to make a living and find a way to survive the impossible. Not only reinvent me but be successful as I reinvented myself.”

In the past 12 years, you can say Mesnick has reached his goal. Deli Board has garnered attention from the likes of Bon Appetit and other major publications. He’s served politicians like Gov. Gavin Newsom and city officials, too. But the visitors he gushes over most are local chefs who swing by to grab a hefty sandwich. He’s had photo ops with the likes of Matt Horn of Horn Barbecue, Mourad Lahlou of Mourad and Evan Allumbaugh of Che Fico, among others.

“It’s the chefs for me,” Mesnick said. “I like that the chefs are feeding their groups or themselves. People like me work constantly, so it’s nice to take a break and have someone else cook for you. I feel very fortunate that they have found a sandwich place in San Francisco that they love.”

For the past 12 years, Mesnick has successfully run Deli Board, despite almost losing his lease and the occasional break-in. Beyond its lack of delivery, phone orders and limited six sandwich rule per customer, customers flock to the store and place their takeout orders in droves.

It’s all part of an experience Mesnick wants to preserve and a true testament to his craft. But even if the demand for Deli Board is there, Mesnick is hesitant to open a second store.

He’s opened past restaurants that include the now-shuttered Rye Project and the Deli Board spin-off The Board, which closed in 2019. He admits opening restaurants “aren’t necessarily my favorite things to do.”

“I don’t know that opening more stores would be anything other than another layer of challenges for me,” Mesnick said. “When it’s all said and done, the only risk is [Deli Board]. That’s the greatest lesson that I learned from having other stores. I don’t know that the best decision would be to open another one unless the right opportunity for an owner, operator slash chef that really wanted to have their own Deli Board.”

While the future of another Deli Board is unclear, Mesnick reflects on his tenure so far with a deep sense of gratitude and trusts that he could never recreate its concept today.

“We’re talking about what happened in 2010 and I’m thinking how I can’t believe what’s happened since then,” Mesnick said. “[Deli Board] has given me … the ability to share food and food memories with people.”

The Block couple Ankur and Sharon feud with Keith

Dogs With Medium Energy 2022: Here are the 10 breeds of adorable medium energy dog…