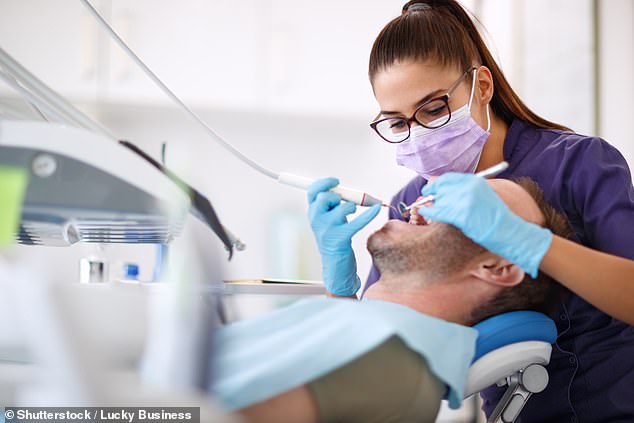 Why going to the dentist could spare you from DEMENTIA: Patients with gum disease are 23% more likely to get memory-robbing disorder, study finds

Going to the dentist can feel like a chore.

But a study suggests it’s really worth getting regular check-ups — because it could help you ward off dementia.

Finnish researchers found people suffering with gum disease and tooth loss were roughly a fifth more likely to be struck down with the cruel condition.

Experts said it suggested the ‘monitoring and management’ of dental health could be key in preventing the condition.

Over the past decade, several studies have uncovered a similar link between poor oral health and dementia.

It has led some researchers to speculate that the condition could be brought on by gum disease itself. The same bacteria that cause bleeding gums can reach the brain, where medics believe it may harm the organ.

But even with the new study, there is no proof that poor oral health definitely causes dementia. The Finnish research is merely observational.

The link could actually happen for the opposite reason. People in the earliest stages may forget to brush their teeth, experts argue.

Around 900,000 people are thought to be living with dementia in the UK. The figure is around seven times higher in the US, charities say.

The latest research, in the Journal of the American Geriatrics Society, pooled data from 47 previous studies that delved into the association between cognitive decline or dementia and oral health. Most of the papers only looked at over-65s, and tracked their health for less than a decade.

Academics from the University of Eastern Finland in Kuopio looked at papers about periodontitis — a severe form of gum disease.

The condition can cause jaw bone loss, gaps under the teeth and damage the connective tissue that keeps teeth in place.

It can be prevented by brushing teeth to remove plaque before it hardens into tartar, a hard cement-like substance that can only be removed professionally.

They trawled through all available figures, comprising thousands of people and their medical records, to uncover the link.

People with gum disease and missing teeth were up to 23 per cent more likely to end up with cognitive decline or dementia, according to the analysis.

But the team said the quality of the evidence was weak.

Writing in the journal, the authors said: ‘From a clinical perspective, our findings emphasise the importance of monitoring and management of periodontal health in the context of dementia prevention.

‘Available evidence is not yet sufficient to point out clear ways for early identification of at-risk individuals, and the most efficient measures to prevent cognitive deterioration.’

WHAT IS DEMENTIA? THE KILLER DISEASE THAT ROBS SUFFERERS OF THEIR MEMORIES

Dementia is an umbrella term used to describe a range of progressive neurological disorders (those affecting the brain) which impact memory, thinking and behaviour.

There are many different types of dementia, of which Alzheimer’s disease is the most common.

Some people may have a combination of types of dementia.

Regardless of which type is diagnosed, each person will experience their dementia in their own unique way.

Dementia is a global concern but it is most often seen in wealthier countries, where people are likely to live into very old age.

HOW MANY PEOPLE ARE AFFECTED?

The Alzheimer’s Society reports there are more than 900,000 people living with dementia in the UK today. This is projected to rise to 1.6million by 2040.

Alzheimer’s disease is the most common type of dementia, affecting between 50 and 75 per cent of those diagnosed.

In the US, it’s estimated there are 5.5 million Alzheimer’s sufferers. A similar percentage rise is expected in the coming years.

As a person’s age increases, so does the risk of them developing dementia.

Rates of diagnosis are improving but many people with dementia are thought to still be undiagnosed.

IS THERE A CURE?

Currently there is no cure for dementia.

But new drugs can slow down its progression and the earlier it is spotted the more effective treatments are.

Cholesterol drug could be used in treatment of prostate…