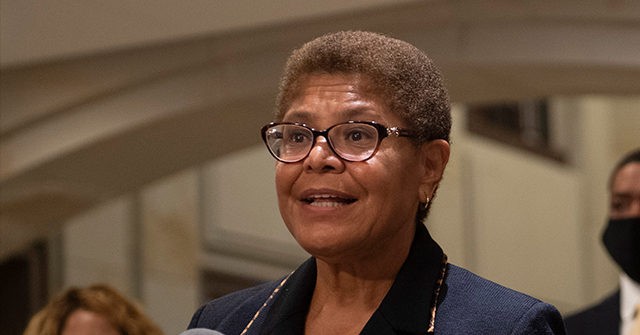 Rep. Karen Bass (D-CA) is increasingly tied to a federal corruption case involving the University of Southern California (USC), which allegedly gave Bass and another politician’s daughter a scholarship in return for support for legislation to secure funding.

As Breitbart News noted last year, Bass received a $95 scholarship — while serving in Congress — to pursue a part-time graduate degree at USC. An official at the school allegedly hoped Bass would back legislation to fund the school’s social work program.

Bass obtained permission from Congress to receive the scholarship, but did not list it on campaign financial disclosures for years.

Now, she is increasingly tied to the case against Flynn, though federal officials say she is not a target. The Los Angeles Times notes:

By awarding free tuition to Bass in 2011, Flynn hoped to obtain the congresswoman’s assistance in passing coveted legislation, prosecutors wrote in a July court filing. Bass later sponsored a bill in Congress that would have expanded USC’s and other private universities’ access to federal funding for social work — “just as defendant Flynn wanted,” the filing states.

Federal prosecutors declined this week to elaborate on their statements about the scholarship. “At present and based on the evidence obtained to date, Rep. Bass is not a target or a subject of our office’s investigation,” said Thom Mrozek, director of media relations for the U.S. attorney’s office in L.A.

But with Flynn and Ridley-Thomas on trial in November, the circumstances of Bass’ free master’s degree could become an increasingly contested part of the case. In June, Flynn’s lawyers subpoenaed USC for correspondence pertaining to Bass’ scholarship and any honors or benefits given to the congresswoman, according to a copy of the subpoena filed last month.

A further wrinkle in the case: Caruso was the chair of USC’s board when the university reported the alleged corruption to the FBI.