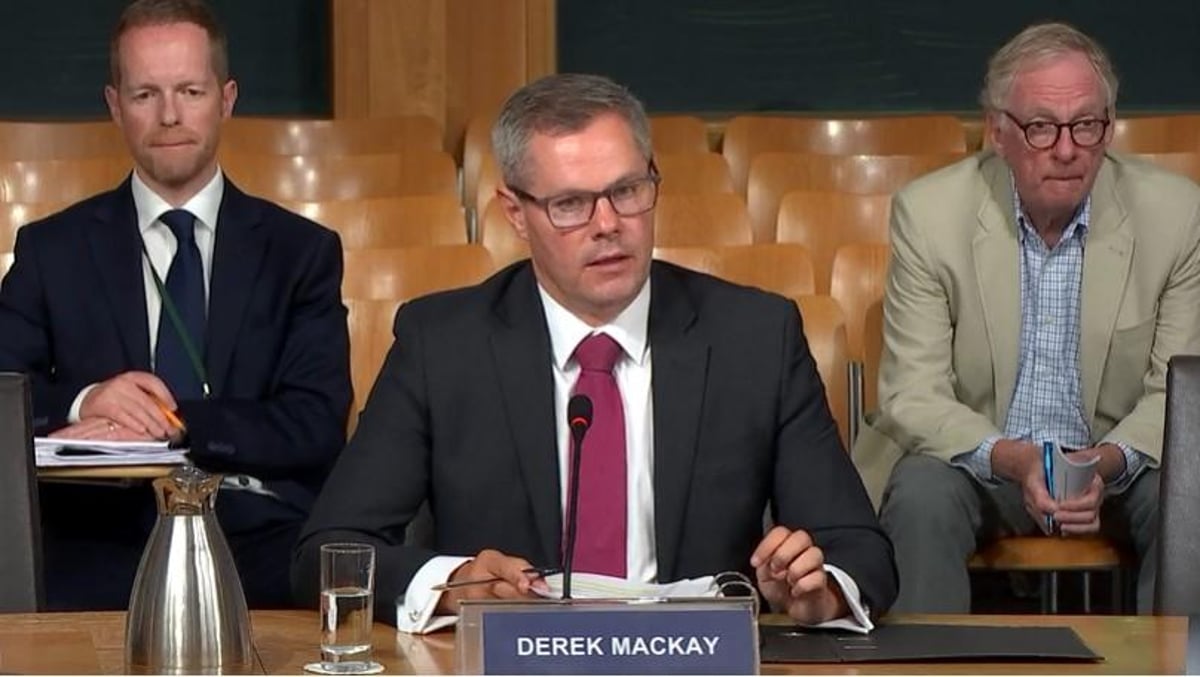 The former SNP high-flyer was giving evidence to the Public Audit Committee on the botched contract with Ferguson Marine for two ferry contracts.

It was the first time the former MSP had spoken publicly since resigning in disgrace after the Scottish Sun revealed he had texted a 16 year old boy, called him cute, and offered to meet with him.

Critics said the texts amounted to “grooming”, with Mr Mackay forced to quit on the eve of the February 2020 budget after he issued an unreserved apology for what he labelled “foolish” behaviour.

However, he retained his seat as an MSP until the 2021 election, taking home thousands of pounds in salary, with the total amount of taxpayers money received at around £130,000 after resettlement grants and other payments.

He has not been seen in Holyrood since he quit as finance secretary until today.

Following his evidence session, in which he said he accepted his “fair share” of blame for his role in the ferries fiasco, Mr Mackay was ushered out a side door away from the gathered media, down a concrete staircase, and out to the parliament’s car park, flanked by Scottish Parliament officials.

One official told journalists Mr Mackay was there to answer questions from the Public Audit Committee, in an attempt to shield the former MSP from the media.

He refused to answer any questions as he was pursued by one reporter, including whether he wanted to apologise to the public for his behaviour and whether he agreed with accusations that he had acted “sinisterly”.

The former minister also refused to justify his receipt of salary, resettlement grants and other payments despite not appearing in Holyrood following the scandal.

Mr Mackay was the minister who approved the £97 million contract for Hulls 801 and 802 being given to Ferguson Marine and was later responsible for bringing it into public ownership to save it from administration.

The Scottish Government’s ferry procurement body Caledonian Maritime Assets Limited (CMAL) warned against giving the contract to Ferguson before the decision was made and it is not clear why the decision was taken to disregard the body’s evidence.

The report also found there was an insufficient paper trail documenting why the decision was made to give the contract to the Port Glasgow yard despite the objections of CMAL.

Asked by Scottish Conservative MSP whether he believed he was the victim of an ‘Operation Blame Derek Mackay’ from the Scottish Government, the former finance secretary said that he will “take my share of responsibility”.

He added: “Equally I recognise the catastrophic failure at Ferguson’s to complete the vessels on time and on budget, that is deeply regrettable.

“But what I don’t regret is protecting the workforce and ensuring the yard was supported, it has a future, and we were able to support Scottish ship building.”

When asked who else has to share in the responsibility, Mr Mackay said: “According to the Auditor General and the previous (Rural Affairs and Connectivity Committee) in the previous Parliament, there are multiple failings.

“I don’t think it all rests on me, but other people have advised there are multiple failings here.”

The former MSP rejected accusations the deal had been rushed for political reasons, or that political considerations due to shipyard owner Jim McColl’s pro-independence political views directed decision making.

“Nobody was ever compromised on that matter, the decision to award the contract to Ferguson was based on Ferguson’s bid, nothing else,” he told the Public Audit Committee at Holyrood on Thursday.

Mr Mackay also said he “can’t imagine” First Minister Nicola Sturgeon was involved personally in the procurement of the ferries.

The former MSP also bristled when asked about CMAL, the ferries infrastructure body, who in evidence said they felt effectively forced into accepting the contract with FMEL.

“If CMAL’s actual request was not to proceed, that is what should have been what featured in a submission to me,” he said, “it was not”.

Many of the questions posed to Mr Mackay centred around discussions on announcing the yard as preferred bidder, with the MSP saying he did not know due to being on holiday.

He also said he believed there were acceptable mitigations in place to allow for the contract to be awarded from a builder’s refund guarantee, a provision which would have protected the taxpayer from significant overspend.

At First Minister’s Questions, Nicola Sturgeon defended the decision to give Ferguson Marine the contract, echoing Mr Mackay’s defence that in doing so, jobs were saved.

Ms Sturgeon said one of the pressures on all construction projects right now is “soaring inflation” which the “UK Government is failing to get under control.”

The SNP leader also accused “detractors” of saying “spurious things” about the future of the ferry construction, adding that she would not say the detractor is Douglas Ross but “others may reach that conclusion.”