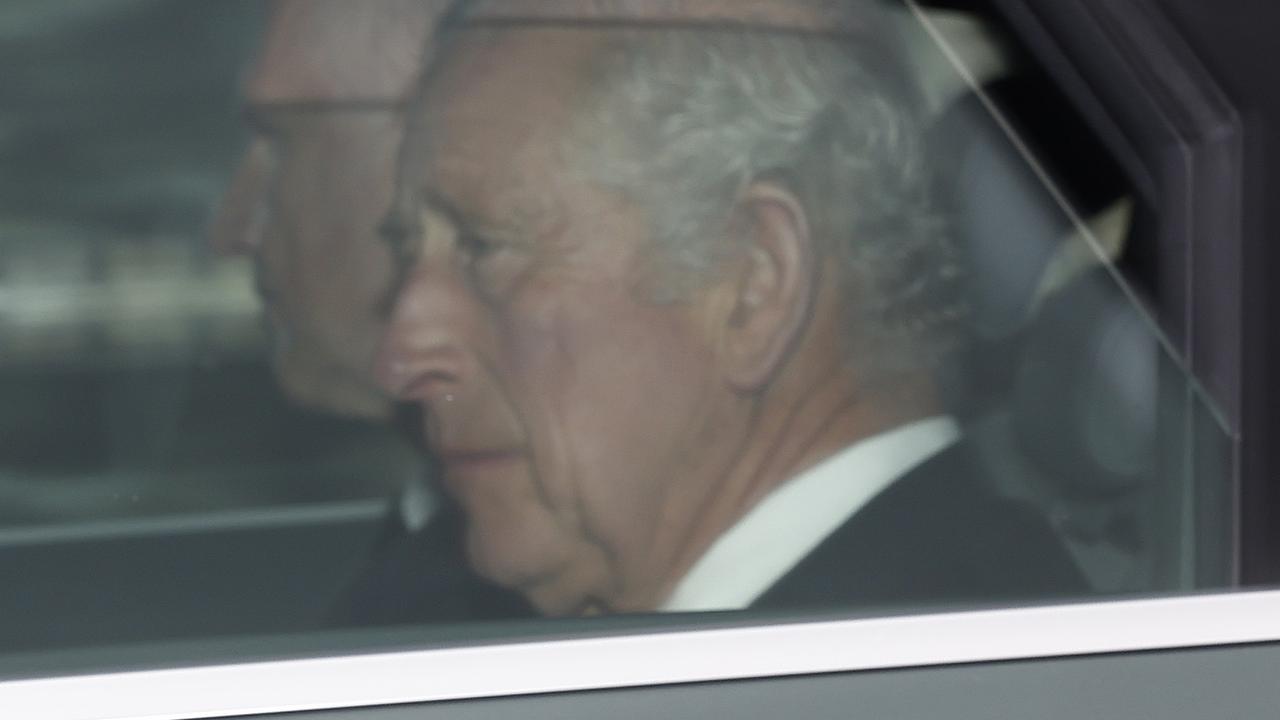 Senior royals had dashed to Her Majesty’s Scottish bolthole to be at her bedside before she passed away peacefully yesterday afternoon (local time).

King Charles III has now started his first day as the nation’s new monarch after a 73-year wait for the throne, The Sun reports.

He was pictured leaving Balmoral for London this morning where he will hold his first audience with the Prime Minister Liz Truss.

Charles is accompanied on the sombre journey by Camilla, who is now the Queen Consort.

Prince Harry was seen leaving the Scottish castle alone this morning in the back of a Range Rover.

He was not joined at Balmoral by Meghan Markle, who is understood to still be in London.

King Charles will make his first address to the nation later today in a televised recording.

He is expected to pay tribute to Britain’s longest reigning monarch and pledge his duty to a life of service in a televised speech.

The royals have entered a period of mourning that will be observed from today until seven days after the Queen’s funeral.

Parliament will hear tributes from MPs and peers from 12pm today in a special session of condolence.

A 96-round gun salute commemorating each year of the Queen’s incredible life will then ring out from London’s Hyde Park at 1pm.

The PM and senior ministers will attend a public service of remembrance at St Paul’s at 6pm tonight.

Charles automatically became King after Her Majesty’s passing but the new role will be made official on Saturday.

This will take place at St James’s Palace in London with a public proclamation of the new sovereign read from the Friary Court balcony.

The pomp and ceremony comes after King Charles led the royals in paying tribute to his beloved mum in a touching statement.

He said: “The death of my beloved Mother, Her Majesty The Queen, is a moment of the greatest sadness for me and all members of my family.

“We mourn profoundly the passing of a cherished Sovereign and a much-loved Mother. I know her loss will be deeply felt throughout the country, the Realms and the Commonwealth, and by countless people around the world.

“During this period of mourning and change, my family and I will be comforted and sustained by our knowledge of the respect and deep affection in which The Queen was so widely held.”

Buckingham Palace announced at midday yesterday that Her Majesty was under supervision at the Scottish estate amid “concerns” for her health.

The devastating statement sparked a flurry of activity from the royals as they rushed to join the Queen’s side.

King Charles was already in Scotland on previous planned engagements along with his sister Princess Anne.

His helicopter was also seen landing on the grounds of Balmoral in the morning.

Camilla also travelled to the castle after cancelling an event at hospital Maggie’s in Airdrie, Lanarkshire.

Soon after, it was confirmed Prince William made his way there together with Andrew, Edward and Sophie Wessex.

Their plane, a Dassault Falcon, was spotted landing in Aberdeen shortly before 4pm.

A fleet of Range Rovers was then driven through the gates of Balmoral as the nation held its breath.

The Duke of Cambridge was seen driving his uncles and Sophie to be with Queen.

The Duchess of Cambridge stayed down south with George, Charlotte and Louis for their first day at school.

Prince Harry was later pictured looking sombre as he made his way from Aberdeen Airport to the Queen’s Scottish bolthole by car.

The Palace confirmed the Queen had passed away with a 26-word statement released at 6.30pm.

It read: “The Queen died peacefully at Balmoral this afternoon.

“The King and The Queen Consort will remain at Balmoral this evening and will return to London tomorrow.”

This story was published by The Sun and reproduced with permission

Denial of responsibility! planetcirculate is an automatic aggregator around the global media. All the content are available free on Internet. We have just arranged it in one platform for educational purpose only. In each content, the hyperlink to the primary source is specified. All trademarks belong to their rightful owners, all materials to their authors. If you are the owner of the content and do not want us to publish your materials on our website, please contact us by email – [email protected].com. The content will be deleted within 24 hours.