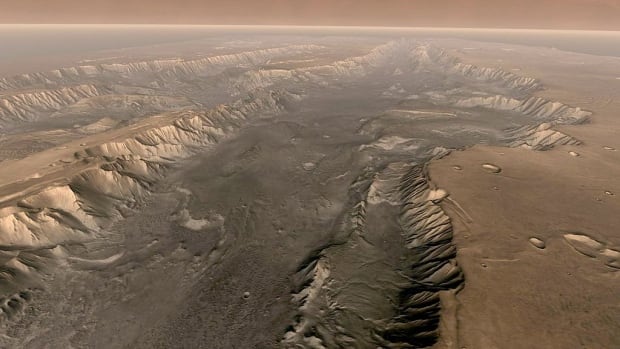 Under the weight of the pandemic lockdowns, food security experts Lenore Newman and Evan Fraser embarked on a thought experiment. Using their research of innovations on earth, they decided to figure out what it would take to feed a human colony on Mars in the year 2080.

Both Fraser and Newman took inspiration from what’s already been developed here on planet earth to envision their Martian colony. From greenhouse technologies to nanotechnologies, they foresee the possibility of a sensible, tasty and well-balanced diet on Mars — including fine cheeses, scotch and sashimi.

Newman and Fraser are co-authors of Dinner on Mars: The Technologies that will feed the Red Planet and Transform Agriculture on Earth. They spoke to IDEAS host Nahlah Ayed about the lessons they learned on how to improve our battered food systems on Earth.

Here is an excerpt from their conversation.

What is it that inspired this whole dinner on Mars thought experiment in the first place?

EF: Well, it was March 20th or so, 2020. And I was — like everybody else on the planet — a mixture of anxious, scared, bored and terrified about this yawning gap that opened up in front of me.

As I recall, Lenore, I started texting you and [said], ‘I think interesting things are happening, but I’m really bored and I’m scared. What do you think?’ And one text every other day led to 30 or 40 texts an hour, and led to a conversation that was essentially, ‘well, we can’t travel anywhere physically, but maybe there’s somewhere we can go to in our imagination.’

This was at the point where Richard Branson and Jeff Bezos were blasting off in their rockets — and so everyone was talking about space exploration. We thought maybe we should just imagine a silly imagining: what would a dinner be like if we ever made it to Mars?

At some point, after about six weeks of this, we realized this wasn’t a silly exercise anymore. It was deadly serious because we were talking about real science, real issues. And then we were starting to apply the lessons that we were imagining being played out on Mars. We started imagining how they might transform food systems here on Earth. And this is where things got really both exciting and serious in that we are not only imagining how we will sustain a new generation of exploration outside of this, the planet that we call home, but also how we need to change how we eat here on Earth.

Evan, if you don’t mind, paint a picture of how inefficient the global system is now for creating food.

EF: So right now, we’ve got a very paradoxical situation at the level of food security. We have this weird world where both the number of hungry and the number of obese people are rising on the planet. So that’s a crazy statistic in and of itself.

And then there’s the environmental costs at a global level of our food system. Food is the number one driver in our losing fight to protect biodiversity. Food is the world’s largest user of freshwater and the largest source of water pollution. Food creates our agri-food systems, creates about a third of the world greenhouse gases, and we waste about a third of the world’s food…So you add all those things up together and you think there has to be a more efficient way of doing these things. And it’s that sort of feeling of what could the alternative be? That led Lenore and I to think, ‘well, maybe if we imagined a food system on Mars, we will unlock some solutions for here on Earth.’

So I’m sold on the idea. I’m imagining the scene that you’re creating, but logistically, how is it even possible, Evan? Describe to me the conditions on Mars that you’d have to contend with in setting up this Martian colony?

EF: Well, I mean, it’s going to be really hard to feed a community on Mars, there’s no question at all. On one hand, you have virtually no water, and what little water is, it is frozen into the regolith — that’s a fancy word for essentially Martian dirt. It’s kind of like permafrost doesn’t have a direct analogy but let’s imagine there’s some water crystals frozen in the soil.

There’s carbon dioxide in the atmosphere. There’s way too much solar radiation, but not enough solar energy because Mars is a lot farther from the sun than Earth, so there’s less warmth there. So it gets really cold and you don’t have what’s called heat units that plants need to flourish. But you’ve got punishing solar radiation because it doesn’t really have a strong atmosphere that gets rid of the radiation. So you’ve got these wild swings in temperatures. It’s generally too cold. You’ve got no organic matter at all. You’ve got very little water and too much radiation, but not enough solar energy. It’s a bit of a disaster.

You can’t send food to Mars. It’s simply too far. You can’t get takeout.– Lenore Newman, co-author of

But you do have things like carbon dioxide and other basic building blocks of life. And so I think when you start imagining life on Mars, you start with some sort of algae or cyanobacteria that can eat that regolith, absorb some carbon dioxide and in doing so, it will produce organic matter and oxygen. And if you can start that process going in some sort of tank and scientists on Earth have simulated Martian conditions and have got cyanobacterias that will eat and flourish under those conditions, well, then you’ve got the basic ingredients on which you can build something more elaborate.

Lenore, how bad are things if we have to contemplate what might happen on Mars to figure out how bad things are here at home?

LN: One of the surprises of the pandemic and one of the not-so-wonderful surprises was how severe the food problems became and how quickly they did, and that basically the world food system went into crisis and has remained in crisis ever since. And certainly there’s been a lot driving that: the pandemic, ongoing and worsening climate change and then, of course, war and political discontent. And what those of us in food and agriculture have realized is we’ve probably left the era where food was easy — with “easy” in quotation marks. But there were definitely 50 years where food got cheaper and cheaper and easier and easier to procure to the point that a lot of people on Earth didn’t have to think about it very hard.

I think one of the catalysts for this for me was Elon Musk and his discussion of a city on Mars kind of brushed aside the food. Evan and I knew that it was actually a big question because you can’t send food to Mars. It’s simply too far. You can’t get takeout.

We started to realize, thought, that the Earth is becoming a lot more like Mars in some ways, in that our own system of takeout in the middle of winter, for example, is breaking down. And as we did this exercise, we realized solving these problems for an environment where you have no cushion, where there is no natural world per say to give you a hand. You actually start to solve these problems on Earth as well. And that became the driving theme of the book was a lot of the changes you need to make to make food work on Mars actually would really help us out here on Earth as well.

Lenore, I understand you take some inspiration from a massive greenhouse complex in England called the Eden Project. Can you tell me about that?

LN: So I went down a very deep rabbit hole about greenhouses. Because the truth is, we don’t entirely just farm outside on earth, we create little environments for our plants. And there have been a few very large experiments to try and bring entire ecosystems indoors for various reasons, for pleasure or for scientific experimentation. And one of the ones that inspired me is this series of domes in the south of England called the Eden Project that encloses a series of biomes in an old mining pit.

LN: It’s mostly for educational purposes. It’s not a true closed system because they do bring in water and air and such but it does serve to show that one can create these little communities of plants that support each other indoors. And we’ve seen that in the Victorian era. It was very popular to create these kind of pleasure domes full of plants and right back into history people have been obsessed with growing plants out of their own ranges and that often requires greenhouses.

Guests in this episode (in order of appearance):

Lenore Newman is director of the Food and Agriculture Institute at the University of the Fraser Valley and Canada Research Chair for Food Security and Environment.

Evan Fraser is director of the Arrell Food Institute at the University of Guelph.

Björn Örvar is co-founder and CSO at ORF Genetics in Iceland.

Cher Mereweather is CEO at Anthesis Provision in Guelph, Ontario.

*Q&A edited for clairty and length. This episode was produced by Nicola Luksic.