Divers discovered a shipwreck in Hawaii. It’s 1 of 60. 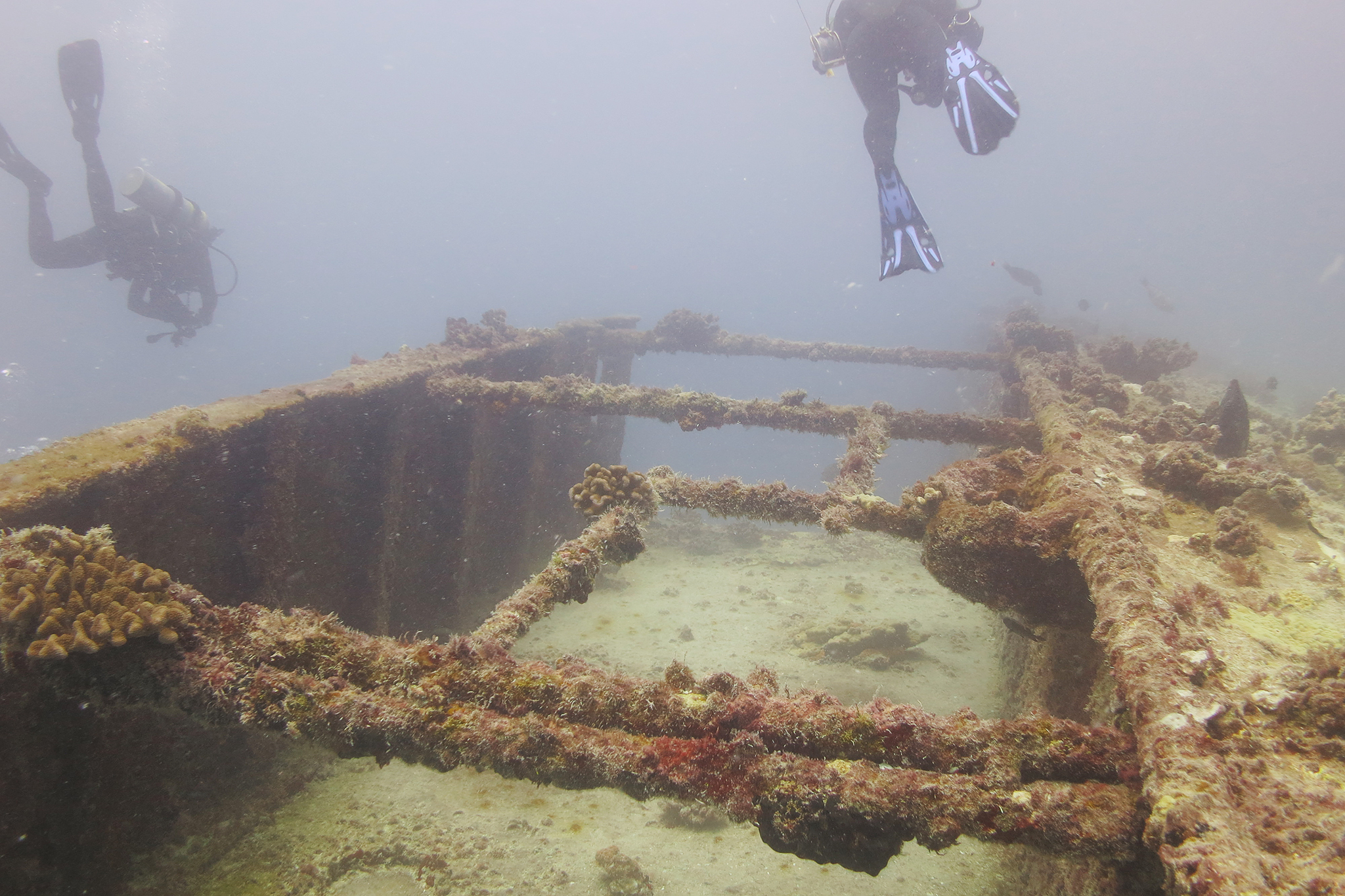 When Capt. George Pollard sailed his whaling vessel, the Essex, into the turbulent waters of the South Pacific in November 1820, he was certain death was on his side.

But as his crew descended on two ivory sperm whales to melt down into slick, precious oil, a 90-foot-long monolith lurking beneath the surface caught his eye. And, to his horror, it was coming straight toward him out in the cold open sea.

“We were at once aware of our danger, but escape was impossible,” a survivor recounted. When the monstrous white whale emerged from the water, ramming the ship not once, but twice, it dawned on Pollard and his crew that they were going to sink. Terrified, they rushed into three small boats, grabbing everything they could: three compasses, two sextants and a few jugs of water and rum that would inevitably run dry.

South America was at least 2,000 miles away, they estimated, and though Tahiti was probably closer, they were deadly afraid of being “devoured by cannibals,” an 1851 report said. As they drifted away from the wreckage, they silently looked back as their vessel fully submerged into the ocean, never to be seen again. No words, they said, could describe the feeling.

For the next few weeks, the crew would be tortured on the open sea. And, ironically, it would turn them into the very “cannibals” they were so afraid of.


As provisions ran low, two emaciated men collapsed and died of hunger. Pollard — who loved his crew members like brothers — knew what they all had to do. Giving in to the “horrid thoughts” that flooded their starved psyches, the stranded Essex crew members roasted and devoured their deceased comrades. “My head is on fire at the recollection,” the survivor said as more young boys continued to die.

After enduring “horror and despair” for days afterward, they were finally rescued by way of some miracle. It was estimated that they spent about three months drifting in the ocean, and the disturbing tale of the Essex became so notorious, it later inspired Herman Melville to pen “Moby-Dick.” Despite barely surviving a grisly voyage, Pollard returned to the ocean just a few years later — this time, in a new whaling vessel, Two Brothers. After all, he thought to himself, lightning couldn’t strike twice.

In 1823, Pollard’s new ship crashed into a shallow coral reef nearly 600 miles northwest of Honolulu. That same reef is part of a remote swath of land now known as Papahanaumokuakea: a somber Hawaiian archipelago that has devoured ill-fated whaling ships, World War II-era soldiers and Japanese fighter pilots. In 2011, almost 200 years after the ship crashed, the Two Brothers wreckage was discovered near French Frigate Shoals, marking a rare, exciting discovery.

But it’s far from the only one.

To date, only about half of the 60 reported shipwrecks in Papahanaumokuakea’s alluring waters have been discovered. Try pots — iron vessels used to liquefy whale blubber — also remain on the ocean floor, lost to the cruel hands of time. However, there are a few theories why this ethereal natural landmark became a cemetery for lost ships and sunken airplanes, according to historians and island stewards.

A cemetery for whaling ships, undiscovered shipwrecks and sunken aircraft

Described as “a region of primordial darkness from which life springs and spirits return after death,” Papahanaumokuakea is a protected habitat that harbors religious relics and historical artifacts deep beneath its ocean’s surface. According to the map, the massive conservation area encompasses at least 10 atolls, islands and reefs, including the famous Midway Atoll. Perhaps the only remaining home to the onyx leatherback turtle, the exceedingly rare Laysan duck and hundreds of endemic arthropods, the monument is an ecologically rich — and deadly — jewel of the Pacific.

And not every ship that sailed into this mysterious archipelago came out in one piece.

After a fierce storm eviscerated the American whaling ship Parker in 1842 and forced distraught survivors to drift to shore using a makeshift raft, the stranded crew members discovered that another vessel had suffered a similar fate. There, they stumbled upon the remains of the Gledstanes, a British whaling ship that disappeared in 1837 when it crashed into Papahanaumokuakea’s Kure Atoll. After crumbling apart amid the heavy surf, it’s since left behind an eerie legacy: four large anchors, a cannon and anchor chain, among other artifacts.

For eight months, the Parker’s desperate shipwrecked men fought for survival by using the Gledstanes for firewood and devouring an estimated 7,000 birds. Ominously, it was said that the Gledstanes’ dog, “having gone wild during his years of isolation, provided some variety in the crew’s diet of seabirds and seals, however brief.”

Hans Van Tilburg, the National Oceanic and Atmospheric Administration’s maritime heritage coordinator, said there are probably hundreds of lost planes in the deep ocean from the Battle of Midway, a horrific aerial battle that took place between Americans and the Japanese after the attack on Pearl Harbor. By the time it was over, more than 3,000 Japanese men had died.

But disaster at Papahanaumokuakea was inevitable: 19th-century whaling ships that relied on celestial navigation and “dead reckoning” were especially prone to collisions. Lack of GPS technology, combined with the archipelago’s low, rugged landscape, made for the perfect storm, Van Tilburg explained via email. “Unlit and uncharted and little known by western navigators,” these elusive atolls posed a serious threat to ship captains — whether they realized it or not.

“Even in good weather, an area of low atolls, and particularly places with shallow shoals and reefs, is enough to strike fear into the heart of all sailors,” Van Tilburg wrote. “Imagine coming through this area on dark or cloudy nights…the first indication of danger might be the sound of the breakers, and by then it’s probably too late to change course!”

A monster in paradise

While it’s not clear when, exactly, these behemoths started showing up, Kevin O’Brien, president and founder of the Papahanaumokuakea Marine Debris Project, knows for certain that they threaten the island’s complex ecosystem.

Each year, 52 metric tons of commercial fishing gear wash up on this sacred land, according to the NOAA. In 2022, O’Brien’s team recovered 86,000 pounds of it from an intricate webbed reef at Papahanaumokuakea known as Kamokuokamohoalii, or “island of the shark god.”

He’s seen these abandoned nets come in all shapes and sizes, bringing in objects like car tires and laundry baskets, stuffed animals and plastic fencing. The biggest one his team yanked out of the ocean weighed a staggering 11 tons.

“Oh my God,” he said over the phone. “We had to cut it into four giant pieces to be able to even tow it out of the reef system and back out to the ship.”

It’s no easy task. Together, O’Brien and his small team charter a 185-foot-long supply vessel during warm summer months. At sunrise and sunset, Native Hawaiian crew members lead chants and ceremonies, paying homage to the islands’ deep ancestral power. Afterward, free divers hunt down the debris in miles-long mazes of coral reefs. This nuanced analog approach of using “muscle power” is sometimes the only way to extract trash without harming the environment, O’Brien explained.

After the nets are yanked from the islands, they’re transported to a metal recycling company, chopped into small pieces and incinerated at Honolulu’s H-Power plant to provide electricity for Oahu. This process is crucial for protecting the conservation area: Aside from choking or strangling animals like Hawaiian monk seals and green sea turtles, stranded fishing gear can cause extensive damage to Papahanaumokuakea’s fragile coral reefs by actually growing into them and smothering them.

O’Brien agrees that these vibrant, diverse reefs are probably the culprit behind the 19th-century shipwrecks.

“There’s no high rocky islands, and most of them could just sail right into the reef in the middle of the night,” he said, adding that the crews probably never even knew they were in danger.

As O’Brien and his team continue to wrangle these strange, unearthly demons of plastic and rubber, life at Papahanaumokuakea carries on. Green sea turtles grace the shoreline, a fierce tiger shark lunges for prey, a Laysan duck and her brood nestle among green pastures. Perhaps what gives this archipelago its mana — or indescribable divine power — is the fact that man isn’t here at all.

As NDP gathers to talk strategy, MPs vow to keep Liberals to their word on pharmacare