Do you live in an anti-depressant hotspot? 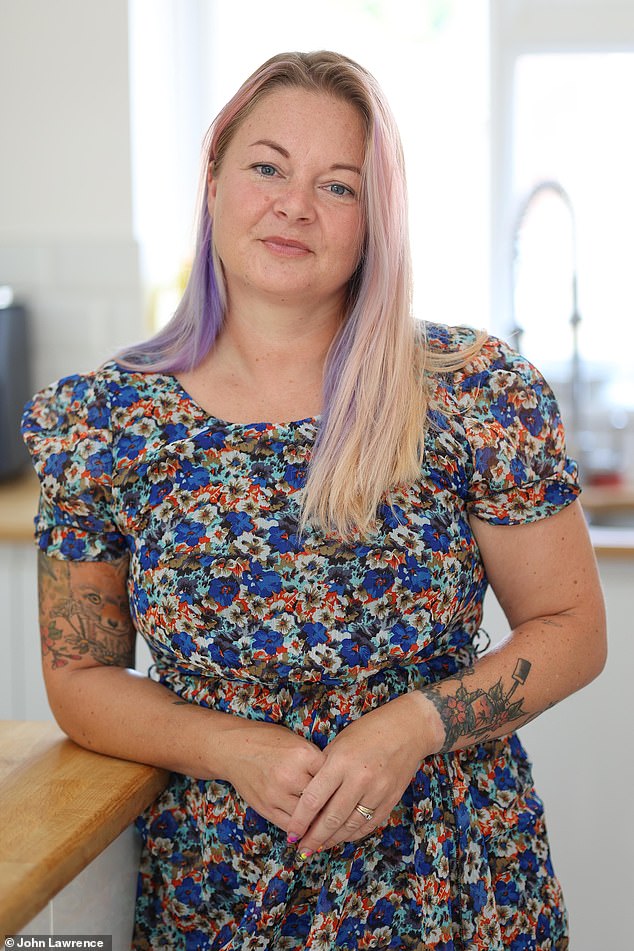 Judging by the volume of antidepressants prescribed by its GPs, Sunderland must be the most depressing place in England.

In May this year, doctors in the NHS Sunderland Clinical Commissioning Group (CCG) prescribed 71,306 antidepressant items for the 286,855 patients on their books. That works out at 248 items per 1,000 patients — by far the highest prescribing rate in the whole country.

And, as Good Health has discovered, there is a huge postcode lottery in antidepressant prescribing — meaning in certain areas of the UK (see table, right, to find your area’s prescribing rate in May), according to new data released last week, you are more likely to end up on medication that some research suggests may be no better than a placebo when it comes to mild or moderate depression, yet can cause side-effects.

Antidepressant use in the UK is soaring — earlier this month it was revealed that the number prescribed in England had risen more than 5 per cent in the year to May 2022.

Charlotte Brighton, 36, a nail technician, lives in Gosport, Hants, with husband Gary, 36, and their children, aged ten and five. She says: When I was diagnosed with depression, I was told I had to go on an antidepressant — there was no other option. ‘This is the best course of action and the quickest,’ my GP said. The waiting time for counselling was months’

And women are more than twice as likely to be medicated with drugs, including antidepressants for anxiety, than men, reported the British Journal of General Practice.

Some of the increase in antidepressants is because of the effect of the pandemic on mental health. But this was the sixth consecutive annual increase: the number of prescriptions for antidepressants in England rose by an astonishing 34 per cent in six years, to more than 83 million a year in 2021/22.

And yet research published last week raised questions about the use of antidepressants on such a scale. It suggested that the belief that depression is caused by an ‘imbalance’ of the brain chemical serotonin is a myth.

Serotonin is a chemical messenger that transmits messages between nerve cells and a lack of it has been blamed for depression.

Joanna Moncrieff, a professor of psychiatry at University College London, was the lead researcher on the project, which looked at the findings of studies involving 300,000 patients.

‘We can safely say that, after a vast amount of research conducted over several decades, there is no convincing evidence that depression is caused by serotonin abnormalities,’ she says.

This undermines the basis of decades of prescribing the most commonly prescribed antidepressants, specifically, selective serotonin reuptake inhibitors (SSRIs).And as with any medication, these drugs can have side-effects: in the case of SSRIs, these include ‘feeling agitated, shaky or anxious, feeling or being sick, indigestion and diarrhoea or constipation’, according to the NHS.

Coming off them can also be problematic. Mental health charity Mind says withdrawal can cause dizziness or vertigo, electric shock sensations, problems with movement or involuntary movements, sensory disturbance, such as odd dreams or smelling something that isn’t there. 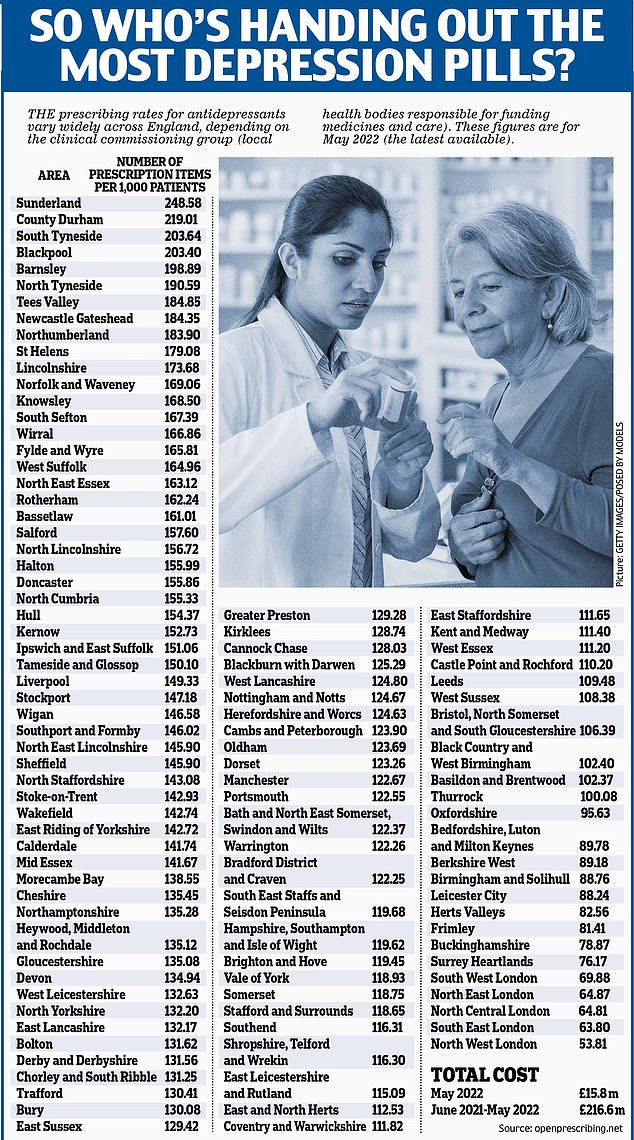 A Public Health England review, published in 2019, found that 20 per cent of people who stopped taking antidepressants after only a month would suffer such ‘withdrawal phenomena’.

Meanwhile, figures suggest women are more likely to end up on the pills.

Professor Moncrieff says: ‘One theory is that women internalise their difficulties, whereas men externalise them — i.e. women get depressed; that is, they “blame” themselves, and men get angry and blame other people or things.’

Research published earlier this year in the British Journal of General Practice found women were more than twice as likely to be diagnosed with anxiety and prescribed antidepressants, and were ‘more comfortable seeking help for mental health conditions’ than men, who were more affected by ‘the stigma associated with poor mental health’.

But if this helps explain the difference between the sexes, when it comes to why if you live in Hampshire you are much more likely to end up on SSRIs than if you live in Frimley, Surrey — the picture is more complicated.

Take the region with the highest prescribing rate, the NHS Sunderland CCG, with 286,855 patients (with 248 antidepressant items per 1,000 patients in May).

By contrast, North-West London, where GPs have a total of 2.7 million patients on their books, has the lowest rate, just 53 items for every 1,000 patients.

Apparently, people in London are generally less depressed — the North-West London commissioning group told Good Health that the capital ‘has the lowest prevalence of depression in the UK’.

But it added that ‘the expansion of mental health services, including the Improving Access to Psychological Therapies (IAPT) programme, plays a role in this [low antidepressant prescription rate]’.

The IAPT programme, a nationwide initiative which began in 2008, is designed to give patients with anxiety or depression access to talking therapies, such as counselling and cognitive behavioural therapy (CBT).

The NHS says it has ‘transformed the treatment of adult anxiety disorders and depression in England’, but it is available to a fraction of the more than eight million adults on antidepressants in England.

Professor Martin Marshall, chair of the Royal College of GPs, told Good Health that while ‘antidepressants are often an effective treatment that can help patients manage mental health conditions’, GPs report that ‘access to appropriate, alternative therapies in the community, such as talking therapies and CBT — that many patients with mental health conditions find beneficial — is patchy across the country’.

He suggests that the patchy provision of talking therapies is ‘a likely factor as to why there are some regional differences in numbers of antidepressant prescriptions’.

‘We need this to be addressed urgently to ensure patients can access the treatment that they need quickly,’ he told Good Health.

But a lack of funding may be leaving GPs with no alternative to medication — the cheapest, easiest option.

Yet this is at odds with what experts see as the root of depression. ‘It’s not what’s wrong with us but what’s happened to us,’ as Heather Sequeira, a consultant psychologist and NHS specialist in CBT, based in Milton Keynes, Buckinghamshire, explains.

‘The relationship between depression and stressful life events, such as relationship breakdown, job loss and physical illness, is incredibly strong,’ he says.

There is a clear link between antidepressant use and deprivation, according to analysis by the NHS Business Services Authority in July 2021. It compared prescription statistics with the Index of Multiple Deprivation (a measure of deprivation that takes account of factors such as income, housing, crime and health) and found concrete evidence that the most antidepressants were prescribed in the most deprived areas.

‘Prescription rates are strongly correlated with social deprivation and especially high in areas where traditional industry declined,’ says Professor Moncrieff. ‘It suggests we are medicating the consequences of socio-economic change.’

Coping with the human health consequences of all this is the Bridge View GP practice in the Southwick area of the city of Sunderland, which is just a stone’s throw from one of the most deprived areas in Tyne and Wear.

Half of the antidepressants prescribed in Sunderland in May were SSRIs. A spokesman for the North East and North Cumbria Integrated Care System, which covers Sunderland, told Good Health prescribing rates are affected by ‘a range of complex and societal factors including health inequalities’.

In a bid to wean patients off antidepressants, the Integrated Care Board has issued new ‘deprescribing guidance’ — the first of its kind in England — to support GP practices ‘in therapeutic conversations with patients about their long-term treatment’.

This includes a ‘low-mood plan and depression status check’ for every patient, which has led to a 3.2 per cent reduction in the number of patients prescribed antidepressants in Sunderland’.

The question remains, however: are antidepressants really the answer for many of the others?

Charlotte Brighton, 36, a nail technician, lives in Gosport, Hants, with husband Gary, 36, and their children, aged ten and five. She says:

When I was diagnosed with depression, I was told I had to go on an antidepressant — there was no other option.

‘This is the best course of action and the quickest,’ my GP said. The waiting time for counselling was months.

After nearly ten years of misery, I felt I had no choice. But I ended up spending 16 years on the pills.

It all stemmed from being bullied at school, every day, for five years. I started getting excruciating stomach pains. I was diagnosed with irritable bowel syndrome (IBS) and given everything from relaxants to anti-spasmodics, but nothing worked. Looking back, it was the stress of being bullied causing all my problems.

After I left school, I went back to my GP — by now he’d tried every stomach medication in the book. When I told him I’d been feeling anxious, with no interest in anything, he said: ‘I think you have depression.’

So, aged 20, I was put on fluoxetine [Prozac], then citalopram. I started on 20mg per day then built up over four years to 40mg. Within a month of taking citalopram, I was less anxious and more interested in the world. But it left me feeling numb and lacking emotion; I was also tired, with a low sex drive.

Still, I saw this as a necessary evil to be free of depression. In 2019, I tried finding out about counselling but was told the waiting lists were even longer. Just after the pandemic, I had a bit of a breakdown. I was hyperventilating and feeling panicky. One day, I fell to the floor sobbing.

I decided to have private counselling. Six sessions would cost me £300 but I wanted to try talking therapy. I saw a psychotherapist who helped me open up.

There were a lot of tears but, through counselling, I’ve learnt that emotions are normal. These emotions are something I should feel, rather than the sense of numbness I had for 16 years.

I now feel so much better. I’ve been slowly weaning myself off the pills, down to 10mg. I wish I’d got counselling sooner. It has changed my life.

Drink for fertli-tea! Lovers of a cuppa have more swimmers, study finds