Do YOU think face masks are justified? Vote here and tell us why… 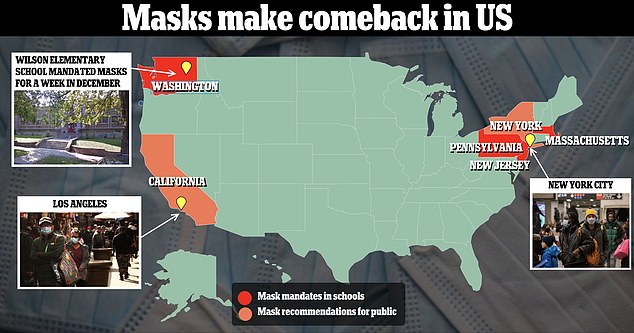 As US schools bring back mask mandates, do YOU think face coverings are justified? Vote here and tell us why…

Do you think face masks are justified?

Face masks are quietly creeping back into daily life as concerns about a new Covid variant rise and flu and RSV continue to spread.

Hundreds of thousands of students across the US will be forced to wear face coverings in class when schools begin to go back today as controversial mandates make a return.

Despite Covid infection rates plateauing for months, elementary and high schools in New Jersey, Massachusetts and Pennsylvania have made masks a condition of entry for students coming back from the holidays.

And officials in New York City, Los Angeles and Washington state have begun recommending their use in indoor public spaces – but have stopped short of implementing mandates.

But there is conflicting evidence on whether face masks actually reduce infection rates on a large scale.

Despite Covid infection rates plateauing for months, elementary and high schools in New Jersey , Massachusetts and Pennsylvania have made face coverings a condition of entry for students returning from the holidays. A week-long mask mandate was put in place in a school in Washington last month and several states have issued mask recommendations to the public

Paradoxically, masks, lockdowns and other Covid restrictions are believed to have robbed children of vital immunity to other seasonal bugs like flu and RSV, which may be why those bugs are causing such high rates of infection and hospitalization now.

There are now growing signs that other pandemic policies are starting to come back.

Last week, the US Government announced all passengers from China – which is suffering a major outbreak – would be tested upon entry, despite no proof that policy works either.

There are around 400,000 Covid cases per week across the US now compared to 4million this time last year, during the Omicron outbreak.

Weekly cases have been stable since late summer, a trend attributed to high levels of immunity in the population through vaccination and waves of infections.

But 22 states were still recording ‘very high’ flu activity in the week before Christmas – down from 26 the week prior. Six states recorded the highest transmission levels, down from eight in early December.

America’s flu season came unseasonably early, although cases of both flu and respiratory syncytial virus (RSV) cratered for the second straight week just before Christmas — meaning the ‘tripledemic’ in America could soon reach its end.

RSV is also a few weeks ahead of the flu crisis. Cases peaked in November but rates remain very high. Both have led to hospitals, particularly pediatric hospitals, being overwhelmed.

The bacterial infection Strep A is also rising among children and has killed at least two in Colorado. The Centers for Disease Control and Prevention (CDC) issued an urgent advisory message about the infection before Christmas, notifying doctors and public health authorities of the situation.

How to cut your holiday debt

Who was responsible for livable housing at Half Moon Bay farms? County officials…