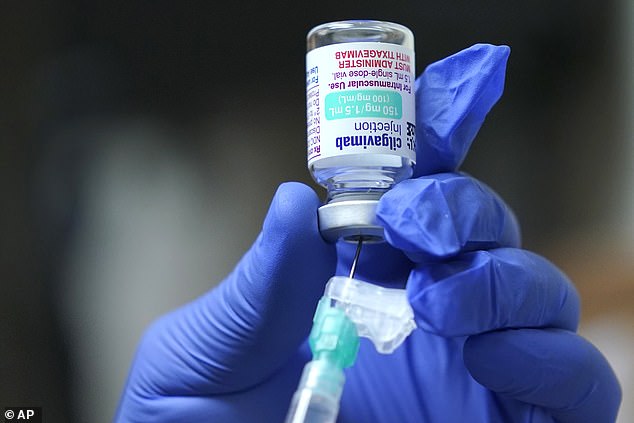 More than 100 doctors have written to the Government demanding that the NHS funds a Covid drug that protect vulnerable patients who don’t respond to the vaccines, The Mail on Sunday can reveal.

They have been joined by 19 charities to pen a letter to Health Secretary Steve Barclay arguing that the medication is a matter of life or death for Britons with weakened immune systems, such as those with blood cancer or an organ transplant.

The move comes just days after the NHS spending watchdog said it will start evaluating the cost-effectiveness of the £800-a-dose treatment, called Evusheld.

Developed by Covid jab-maker AstraZeneca, it was approved by drug regulators in March after a study showed it reduced the risk of Covid infections by 80 per cent.

The drug stops Covid cells from binding to healthy cells, which is how it infects the body. Even if these vulnerable, so-called immuno-compromised, patients do get infected, they are 50 per cent less likely to be hospitalised and die if they’ve had Evusheld.

Based on these results, 28 countries, including France, America and Israel, have snapped up millions of doses since January – but the UK Government has so far refused to cover the cost.

Since Evusheld was ruled safe by regulators four months ago, as many as 500 immuno-compromised Britons have died, according to analysis by the charity Blood Cancer UK shared exclusively with The Mail on Sunday.

Doctors and charities are now calling on the Government to roll out Evusheld to those eligible this autumn, to protect them from the Covid wave expected in the winter.

Dr Lennard Lee, a cancer expert at the University of Oxford and lead author of the statement, said the move would benefit the NHS as well as those who get the drug.

‘Evusheld is likely to reduce demand on hospitals, allowing the NHS to recover while granting immuno-compromised people the freedom that has been taken from them for two years.’

Charities say many immuno-compromised Britons – of which there are thought to be 500,000 – are still shielding.

‘Many people are anxious and feel like they’ve been forgotten by the Government,’ says Gemma Peters of Blood Cancer UK.

‘Evusheld has potential to ease anxiety, which is why we’re urging the Government to buy and roll out the drug quickly.’

The Mail on Sunday was first to reveal that health chiefs had failed to purchase Evusheld a month after its initial approval.

At the time, the Department of Health said further investigations were needed to assess its effectiveness against new Covid variants.

But in their statement, the doctors argue there is now definitive evidence that Evusheld protects the vulnerable from the virus.

On Friday, the National Institute for Health and Care Excellence (NICE), the NHS spending watchdog, announced a two-week consultation into the costs.

A number of MPs have also called for health chiefs to purchase Evusheld. Tory MP Bob Blackman said protecting the lives of the immuno-compromised must be considered a crucial part of the plan to live with Covid.

‘Evusheld could offer a solution and it is important that the voice of patients and clinicians is heard,’ he added.

One Briton calling for access to Evusheld is Scott Brigden, 47, from Hedon, East Yorkshire, who was diagnosed with blood cancer in March 2021. Since then the oil and gas worker has been forced to shield, as the condition and drugs needed to fight it have a severe impact on his immune system.

Scott and his wife Nikola, 52, have not seen any friends or relatives since then.

‘The only time I’ve left the house is to walk the dog,’ says Scott. ‘Our daughter has just gone to university, and now she has to stay away most of the time.’

Scott believes Evusheld would allow him to resume a more normal life.

‘It’s hard enough to have a blood cancer diagnosis and go through intense treatment. Knowing that I’m being denied a treatment that could give me my life back makes the situation even worse.’

How the Supreme Court’s “fauxriginalists” are warping the Constitution

Humans risk being overrun by artificial superintelligence in 30 years

Lifting weights in middle age lowers the risk of death from…