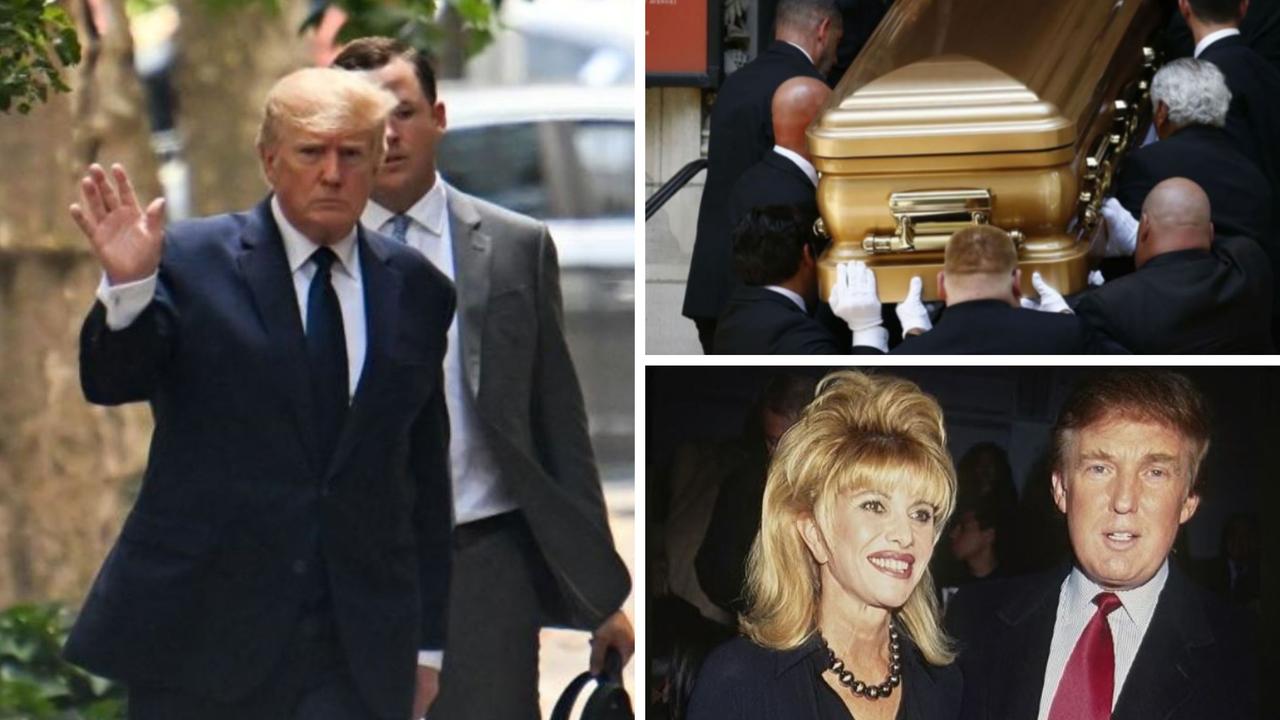 The Trump family, including former president Donald Trump, were out in force in New York on Wednesday mourning the passing on Ivana Trump.

The first wife of Donald Trump was laid to rest at a ceremony on the upper east side of Manhattan.

Mourners looked on the scorching 33C summer heat as the gold casket was carried up the steps of St Vincent Ferrer Catholic Church in one of New York’s ritziest neighbourhoods.

Ivana, 73, died on Thursday last week at her New York apartment. She died from blunt force injuries to her torso that she suffered accidentally, according to New York City’s chief medical examiner.

They did not have any details about exactly how she sustained her fatal injuries but made clear officials’ belief that her death was considered unintentional.

Mr Trump arrived amid tight security to the church from Trump Tower.

Ivanka Trump and her husband Jared Kushner was also at the ceremony.

The family watched as Ivana’s casket left a funeral chapel, with Donald Trump standing in front of other mourners. He was seen comforting Ivanka. It was then taken by hearse to the church.

‘She had brains; she had beauty’

Around 100 people attended the ceremony. The church was decorated with red roses to honour Ivana who was the mother to three of Donald’s children – Donald Jr, Ivanka and Eric.

The event was billed as a “celebration of life” for the fashionable Czech born business person and former competitive skier who loved her home of New York City.

Ivana’s son Eric gave a eulogy where he praised her glamour and nous.

“She had brains; she had beauty,” he said.

“She was the embodiment of the American dream … She was a force of nature.

“She ruled the three of us [kids] with an iron fist but also a heart of gold.”

“Growing up, my mother didn’t tell me a woman could do anything she wanted to — she showed me,” Ivanka said.

“She was a trailblazer by men and women alike”.

Last week, the former President posted on his new social media channel his own tribute to Ivana.

“She was a wonderful, beautiful, and amazing woman, who led a great and inspirational life.

“Her pride and joy were her three children, Donald Jr., Ivanka, and Eric. She was so proud of them, as we were all so proud of her,” he wrote on Truth Social.

Born in former Czechoslovakia under communist rule, Ivana moved to Canada in the 1970s, where she briefly worked as a model.

Her first marriage was to an Austrian ski instructor, Alfred Winklmayr, which she later described as a “Cold War marriage”.

According to the New York Times, the marriage allowed her to get an Austrian passport and move to Canada, however they never lived together. Their relationship was later dissolved in 1973.

Her second marriage – to the then property baron, Mr Trump – was her most notable. While multiple accounts exist around how her and Mr Trump met, the New York Times reported they were introduced at a “party in Montreal”.

During their marriage, Ivana took on multiple senior, interior-design related positions for The Trump Organisation, where she was a senior executive for seven years. In 1988, she became the CEO and president of the Trump Castle Hotel and Casino in Atlantic City.

Ivana Trump spent her final days in the company of her family and out of the public spotlight, but was about to leave on her first overseas holiday in years when she was found unconscious and unresponsive in her New York home.

She was last photographed on the streets of Manhattan’s Upper East Side on June 22. She was being assisted by an aide on her way to a hair appointment.

Ivana, 73, had been maintaining a careful, low key lifestyle since the outbreak of the Covid pandemic. In those final photos, she and her aide were both wearing face masks.

According to her best friend, Nikki Haskell, Ivana was “totally locked down” throughout the pandemic and “wouldn’t go anywhere”. Tragically, she died one day before flying out for her first holiday since Covid began, to Saint-Tropez in France.