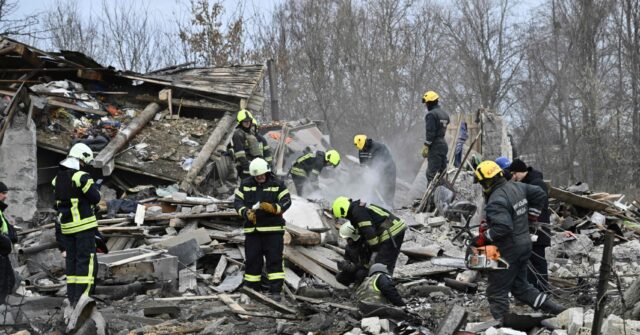 (AFP) – A fresh barrage of Russian missiles battered Ukraine on Thursday, wounding at least five people including a teenager and cutting electricity in the west.

In a first, Belarus said a Ukrainian missile fell on its territory, raising fears of the conflict spilling over.

On Thursday morning, blasts were reported across the vast country including in the Ukrainian capital, the second city of Kharkiv in the east and the western city of Lviv on the border with Poland.

Most of Lviv, where Russian strikes are still rare, was left without electricity, its mayor Andriy Sadoviy said.

The missiles struck even the western region of Ivano-Frankivsk at the foothills of the picturesque Carpathian Mountains located nearly a thousand kilometres (621 miles) from Russia.

“The enemy keeps resorting to its missile terror against the peaceful citizens of Ukraine,” said Ukraine’s commander-in-chief General Valeriy Zaluzhny.

Zaluzhny said Russia had launched 69 cruise missiles, 54 of which were shot down.

Foreign Minister Dmytro Kuleba pointed out that Russia struck again just as Ukrainians were preparing to celebrate the New Year.

In southern Kyiv, Georgiy Yatsenko, 65, said he was hiding in the basement with three of his grandchildren when the explosion occurred at around 9:00 am (0700 GMT).

“There is no glass left in the windows. Everything was blown away,” he said, adding that he would need to cover them with plastic to keep out the cold.

“The war is going on. We have to do whatever we can to survive. The main thing is that people are alive.”

Emergency workers used an excavator to clear rubble in Kyiv’s southern Bortnychi neighbourhood where an explosion heavily damaged half a dozen houses and blew out windows in others nearby.

“We are stuck, getting cold in this tram, but what can we do?” said Iryna Ivaneyko, a tram driver.

“Some people are scared, some are not. This is war. We have to survive this, endure and win.”

The attacks came 10 months into Moscow’s invasion of Ukraine. In recent weeks Russian strikes have been battering the energy grid, leaving millions in the cold in the middle of winter.

On Thursday, the Belarusian defence ministry said its forces downed a Ukrainian missile near the city of Brest on the border with Poland.

The US embassy in Kyiv said Moscow was ramping up its campaign of attacks, “cruelly wielding cold and dark” against Ukraine.

As Ukraine came under fresh attacks, Russian President Vladimir Putin took part by video link in a ceremony that saw the commissioning of new warships and a nuclear-powered submarine.

Western intelligence has said Russia is struggling to meet the ordnance needs for the invasion, but Moscow has refuted this.

“We will never run out of Kalibrs,” the Russian defence ministry said, referring to the cruise missiles used to batter Ukraine.

Moscow has accused pro-Kyiv forces of targeting Russian military sites and civilian infrastructure, and on Thursday Russian forces shot down a drone near Engels, a key air base hundreds of kilometres from Ukraine’s border.

This month the Engels base has already been targeted twice in deadly attacks that Moscow blames on Ukraine.

Ukrainian Energy Minister German Galushchenko said the situation was “tough” in the west of the country and the regions of Odessa and Kyiv and warned there would be emergency power shutdowns.

Kyiv Mayor Vitali Klitschko said that at least three people were wounded in the strikes, including a 14-year-old girl.

Close to half of Kyiv’s population was left without power, he added.

Two houses were hit by fragments of downed missiles in the east of the capital while an industrial enterprise and a playground were damaged in the city’s southwest, officials said.

“The cynicism of Russians has no bounds,” wrote Kyrylo Tymoshenko, deputy head of the president’s office.

In the south, Odessa governor Maxim Marchenko said air defences shot down 21 missiles over the region.

In the southern city of Kherson the strikes damaged a medical facility and left two people injured, Tymoshenko said.

On Wednesday, two civilians were killed and another 12 were injured as a result of Russian attacks, said Tymoshenko.

Moscow has said the strikes on Ukrainian infrastructure are a response to an explosion on the Kerch bridge connecting the Russian mainland to Crimea annexed by Moscow in 2014.

John Fetterman hasn’t given a single interview since election, amid questions about fitness