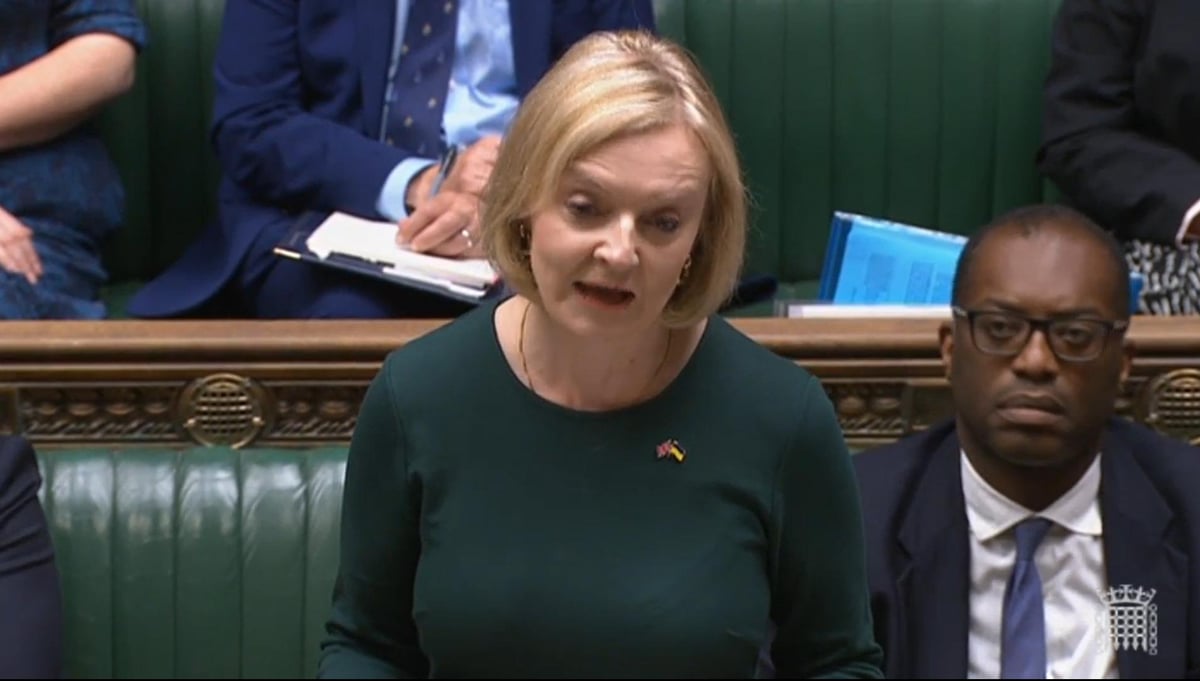 Consumer and business groups welcomed the energy price freeze unveiled by Ms Truss on Thursday in what could ultimately become the most expensive policy of her premiership.

The price cap will last for two years for households, with a six-month equivalent scheme for businesses. The energy cap freeze will come into affect from October 1.

Downing Street has refused to put a cost on the programme, previously estimated to be up to £150 billion.

Prime Minister Liz Truss outlined her plans in the Commons on Thursday.

The Prime Minister’s official spokesman would only say the price would be “tens of billions”, with the package to be paid for by borrowing after Ms Truss declared she would not “give in” to Labour’s calls for a new windfall tax.

Responses to the announcement praised the UK Government for action, but raised concerns over how long the relief would last, with suggestions more money would be needed.

The Federation of Small Businesses said it would be a “huge relief”, but that businesses could struggle after winter.

FSB Scotland policy chair Andrew McRae said: “The six-month lifeline to get businesses through the winter is vital, but this must not result in a cliff edge with businesses being hit even harder in the spring.

“Our recent energy report demonstrates the stark reality that a higher proportion of Scottish businesses have seen their bills rise than those in the wider UK.”

SLTA managing director Colin Wilkinson warned: “Today’s announcement has not gone into enough detail on what ‘equivalent support’ will mean and does not help businesses already planning to close or reduce their opening hours over the winter period.

“This should have been a priority for Westminster months ago when experts were ringing alarm bells and warning of the juggernaut that was on its way. All help is, of course, welcome, but Liz Truss is only really giving us a sticking plaster to fix a broken leg.

“We’ve all read the reports this week that pubs could have to increase the cost of a pint to £15 or even £20 to survive over the winter – that’s untenable for both businesses and operators.

“The current situation, for many businesses, is worse than the pandemic.”

Energy announcement: Liz Truss announces price cap will be fixed at £2500 a year…

Under the current domestic energy cap, households had faced average bills of £1,971, but this was set to rise to £3,549 in October.

But the plan will see the Government limit the price suppliers can charge customers for units of gas, replacing the existing price cap set by regulator Ofgem.

Ministers will provide energy suppliers with the difference between the new, lower price and what they would charge were this not in place.

Ms Truss has also confirmed a new round for oil and gas licensing would be launched as early as next week. More than 100 new licences are expected to be subsequently granted.

A new energy supply taskforce will also be formed to negotiate with suppliers to agree long-term contracts.

But stakeholders pointed out while price increases were being ruled out, a wholesale change of energy was needed to protect families.

Justina Miltienyte, head of policy at Uswitch.com said: “This help, while much-needed, is unaffordable to sustain. The longer we have to rely on Government support to keep prices down, the higher the final bill will be for taxpayers for years, if not decades, to come.

“With the pressure lifted for this winter, we welcome the announcement of an energy supply taskforce that must now sort out the structural problems of the wholesale energy market and how it interacts with the blunt price cap mechanism.

“The Government has made a start towards tackling the energy crisis, but now needs to work out how to make sure this never happens again.”

Citizens Advice Scotland (CAS) suggested the measures would “not end the crisis”, and claimed many would still face “horrific spending choices” over winter.

The organisation’s social justice spokesperson Stephanie Millar said: “Even with this intervention, bills in October 2022 will be around £1,000 higher than a year ago.

“One in three people already found those bills unaffordable. Meanwhile half a million people in Scotland have no money left after covering the essentials.

“That’s why we need to see further action, including targeted support for the most vulnerable by boosting Universal Credit, and more support for advice services like CABs that help people through this crisis.”

Charities, unions and think-tanks also questioned why the support was not targeted.

Chief economist at the Joseph Rowntree Foundation, Rebecca McDonald, said: “People are already unable to pay a range of bills so, even after today’s announcement, the failure to offer further targeted support will feel like a knockout blow to the millions of people agonising about their finances.

“The promise of a growing economy on the horizon will be cold comfort when people have seen their benefits payments fall behind inflation and other bills continue to rise.

“This is why the Government must do more in its fiscal statement to stop the poorest going without the essentials even after big energy price rises are frozen. Those suffering hardship now deserve to know what additional support they will get as cost-of-living pressures continue.”

Unison general secretary Christina McAnea said: “The companies raking in billions from soaring energy costs should pay their share. Another windfall tax would be fairer than handing huge debts to future generations.

“Putting bills on ice isn’t enough though. Bills will still be almost double the amount they were last year.

“Long-term energy efficiency measures are also needed, especially for older homes, then the poorest won’t keep going without just to keep the lights on.”

Climate solutions charity Ashden warned only a long-term commitment to retrofit homes and invest in renewables could fix the crisis, and criticised plans to bring back fracking.

The charity’s chief executive Harriet Lamb said: “The crisis is caused by high oil and gas prices – drilling for more will not address that key problem.

“It will take years and will add to the climate crisis. Investing in renewables is quicker, cheaper and is the only solution to the climate emergency we are in.”

Experts warned while easing inflation, the relief package would carry a “massive” cost to the nation’s finances.

Martin Beck, chief economic adviser to the EY ITEM Club, is forecasting that inflation will now peak at around 11 per cent in October, less than the 15 per cent he was forecasting before Government intervention.

He said: “Undoubtedly, the new support package entails a massive fiscal cost and exposes the public sector balance sheet to a liability the size of which is unknowable at present – the cost may prove even bigger than expected, if wholesale gas prices rise further, or the winter proves unseasonably cold.

“But there would have been a significant fiscal cost to doing nothing.”