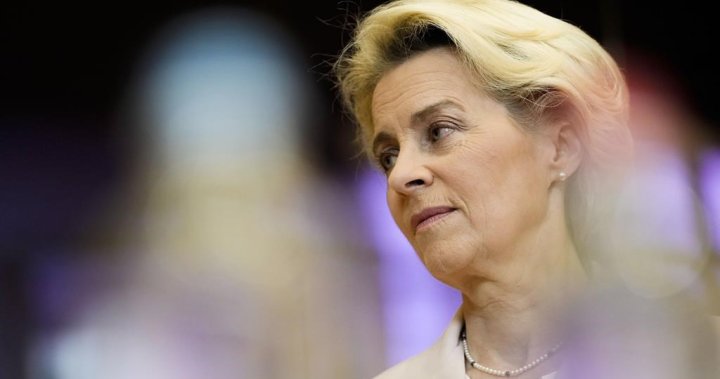 The European Union imposed more sanctions on Russia on Thursday over the war in Ukraine after the bloc’s member states backed a series of measures that would include gold imports and tighten export controls on some high-technology goods.

European Commission Ursula von der Leyen said that the “reinforced, prolonged EU sanctions against the Kremlin” send “a strong signal to Moscow: we will keep the pressure high for as long as it takes.”

The details of the sanctions were still unclear since they still need to be posted in the EU’s official journal.

EU officials have been seeking all week to tighten the extensive package of sanctions on Russia and looking at ways to add a ban on gold exports in hopes that the measures might finally start to have a decisive impact on the war in Ukraine.

EU foreign affairs chief Josep Borrell said Monday that at the moment “the most important thing is a ban on Russian gold,” which is Moscow’s second-largest export industry after energy.

The Group of Seven leading industrial nations last month already committed to a gold ban, arguing the Russia has used its gold to back up its currency to circumvent the impact of several rounds of sanctions that nations around the world had already imposed on Moscow for its Feb. 24 invasion of Ukraine.

On top of the restrictive measures, the EU also decided to grant 500 million euros to boost military aid to Ukraine.

No indictment in shooting death of Houston girl during ATM robbery

After her breast cancer battle, Julia Bradbury heads to Mauritius for a much-needed reboot

Failure to qualify for Rugby World Cup has ensured new…