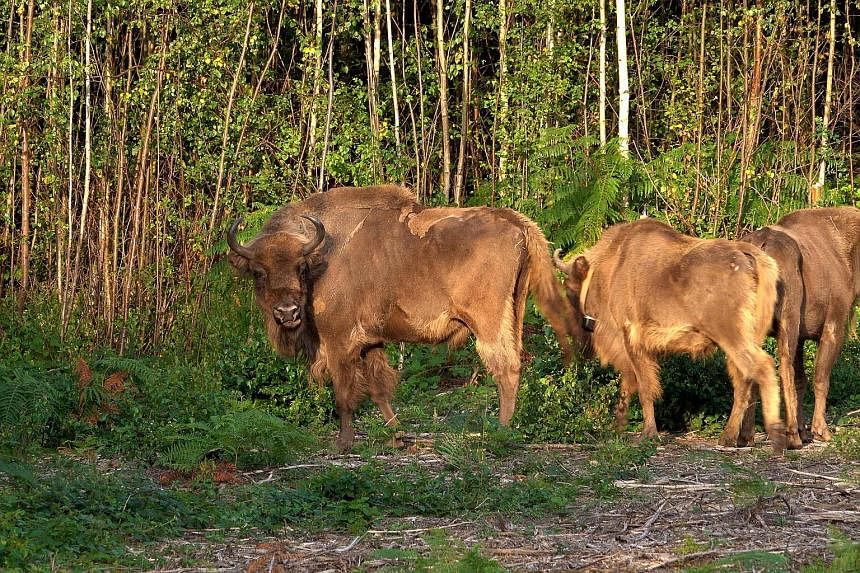 HERNE BAY, UNITED KINGDOM (AFP) – As the sun rose on Monday (July 18) over south-east England, three bison emerged from a corral into their new woodland home.

This is part of an ambitious project to transform the natural environment, to restore and manage the area with their behaviour – and minimal human interference.

It marks the first time in millennia that European bison – the continent’s largest land mammal and the closest living relative to ancient steppe bison that once roamed Britain – will live in wild conditions once again.

“It couldn’t have gone any better… they took a glance back, looked at us and then disappeared into the woodlands,” he added, moments after the release.

The female bison – one matriarch and two younger cows – will now graze, eat bark, fell trees and take so-called dust baths, churning up the ground in the woods.

This creates a multitude of benefits, helping other species forge habitats as the bison become the perfect “ecosystem engineers”.

“We’re doing this to restore the environment and restore a native English woodland and everything that thrives in and around that kind of habitat,” explained Mr Habben, saying it was “critically important”.

“We don’t want to be using machinery… Using native resources, ecosystem engineers as we like to call them – in the form in this case of the European bison – is exactly the right thing to do.”

The female bison, which arrived after living on smaller enclosures in Ireland and the Scottish Highlands, will be joined by a bull at the site, owned by the Kent Wildlife Trust charity, in the coming months.

The bull’s arrival from Germany was delayed due to Britain’s post-Brexit bureaucracy for importing animals.

The herd will initially have 55ha of fenced woodland to roam in, before their habitable space is eventually increased to 200ha.

It is hoped the bull will breed with the females to increase the size of the herd, with the Kent site licensed to hold up to 20.

The bison will also soon be joined by other grazing animals including ponies from Exmoor in south-west England, Iron Age pigs and Longhorn cattle, which will aid the bid to create a variety of natural habitats.

“This is a model for what we would hope could be rolled out much (more) broadly across the UK, to similar landscapes, utilising bison,” said Mr Habben.

“I like to think bison that we bred on this project, by the time they reach maturity… there’ll be other projects looking to do the same kind of thing.

“And we can move bison around to continue this really amazing work that these animals are going to do.”