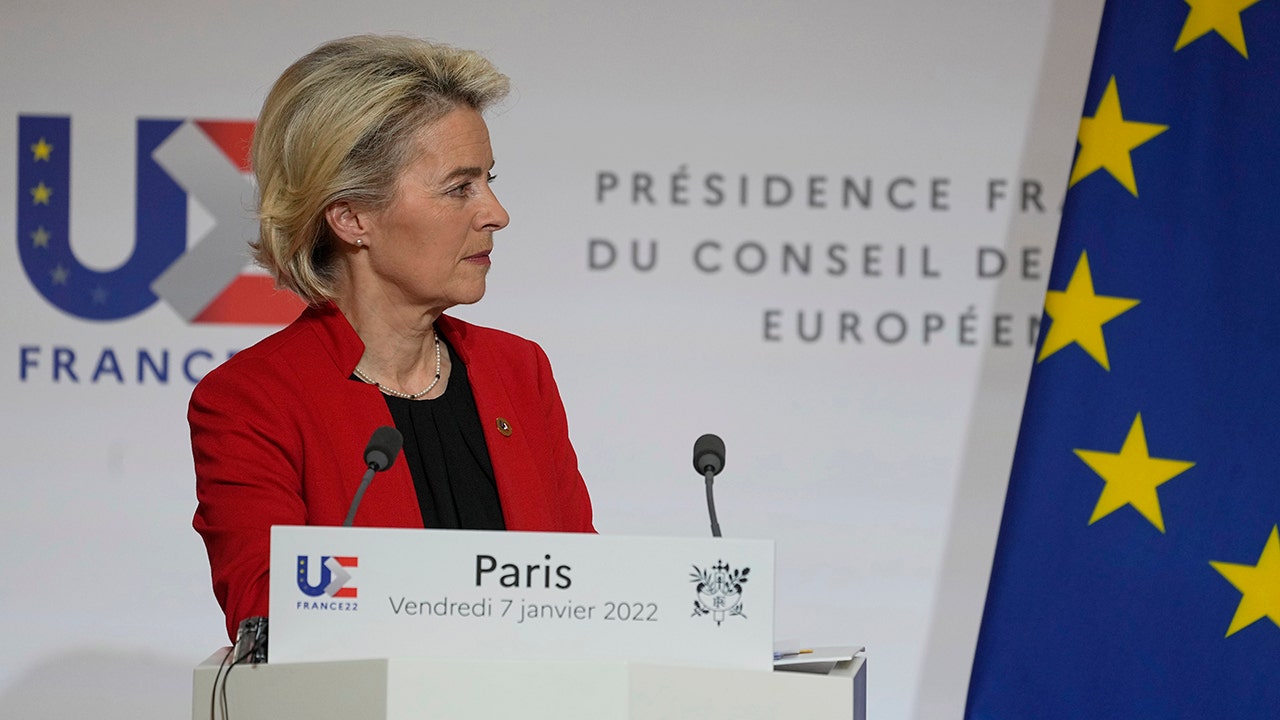 The European Commission has proposed a plan to fund rebuilding Ukraine using frozen Russian funds seized as part of sanctions.

“Russia must … pay financially for the devastation that it caused,” Ursula von der Leyen, president of the EU’s executive said in a statement. “The damage suffered by Ukraine is estimated at 600 billion euros.”

“Russia and its oligarchs have to compensate Ukraine for the damage and cover the costs for rebuilding the country.”

Russia’s Central Bank saw about $300 billion of its assets globally frozen in response to Russian President Vladimir Putin’s invasion of Ukraine in February. Russian oligarchs have seen between $20 and $30 billion in personal assets frozen or seized.

The assets remain untouched since that time, and officials in the European Union (EU), United States and other Western nations have debated whether Ukraine can benefit from any of the funds.

European Commission President Ursula von der Leyen listens to questions from journalists as she participates in a media conference with French President Emmanuel Macron after a meeting at the Elysee Palace in Paris Jan. 7, 2022.
(AP Photo/Michel Euler, Pool)

European officials argued that one short-term option would see the nations create a fund to manage and invest liquid assets from the central bank and use the proceeds – rather than the funds themselves – to fund Ukraine. This would see the assets returned in full to their owners once sanctions end.

However, an official who spoke anonymously with Reuters said it is “not easy” to use a scheme that has no precedent and will require “strong backing from the international community.”

“But we believe it is doable,” the official said, noting that the main issue rests with the fact that most European nations can only seize assets in the case of a criminal conviction, which has yet to happen but may happen in the near future.

The EU on Wednesday proposed setting up a special court to investigate alleged war crimes committed by Russia in Ukraine.

Emergency workers clear up debris after an airstrike hit a tire shop in the western city of Lviv, Ukraine, on Monday.
(AP/Philip Crowther)

“Russia’s invasion of Ukraine has brought death, devastation and unspeakable suffering,” von der Leyen said. “This is why, while continuing to support the International Criminal Court, we are proposing to set up a specialized court, backed by the United Nations, to investigate and prosecute Russia’s crime of aggression.”

NATO COMMITS TO UKRAINE MEMBERSHIP, SUPPORT AGAINST RUSSIA: ‘KEEP CALM AND GIVE TANKS’

The European Commission’s plan for Russia’s assets bears similarities to a plan the U.S. has proposed for funds seized from Afghanistan, which would sit in a Swiss-based trust fund.

A body with hands bound by white cloth, who according to residents was shot by Russian soldiers, lies in the street in Bucha, Ukraine, on Sunday.
(Reuters/Zohra Bensemra)

The commission acknowledged that it is “very early days” to decide on the plan, which it will present to a G-7 taskforce in December.

Moscow has insisted that any use of funds amounts to theft and opposes their use in any form.

The U.S. State Department did not respond to a Fox News Digital request for comment by time of publication.

Fox News’ Caitlin McFall and Reuters contributed to this report.

Peter Aitken is a Fox News Digital reporter with a focus on national and global news.