‘Everything in Hong Kong has changed’: A road to reinvention 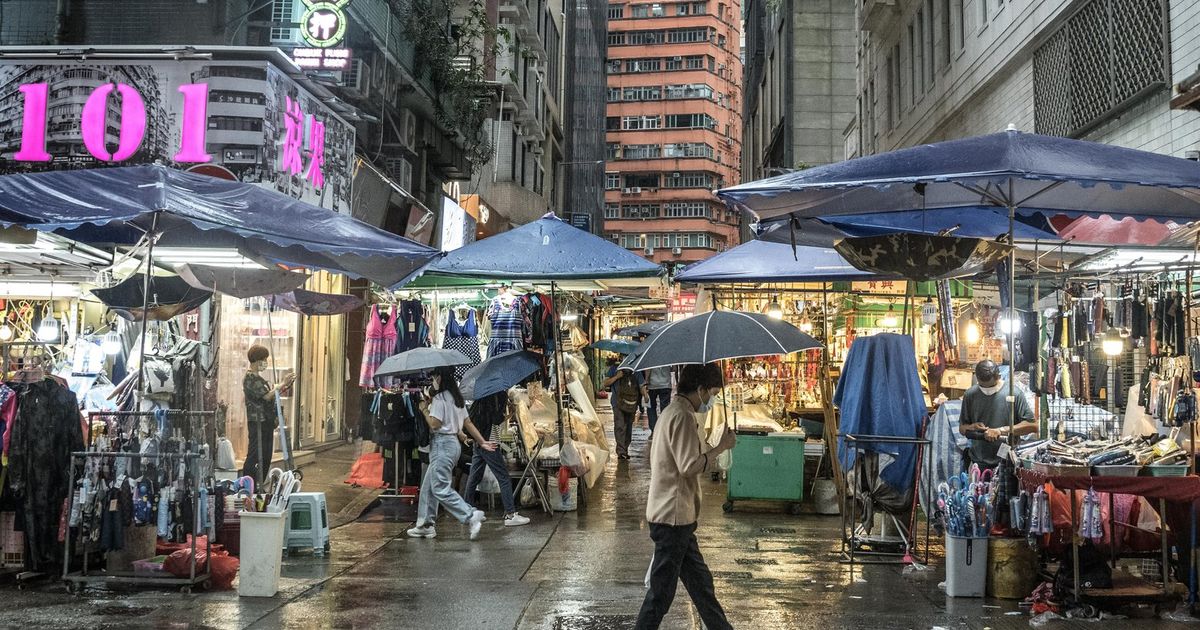 HONG KONG — On the day that Hong Kong was returned to China a quarter century ago, the noodle maker of Queen’s Road worked as he had done for days and decades before, mixing flour and water into sustenance for a city filled with refugees from the mainland. To satisfy the diverse tastes, he made tender Shanghai noodles and Cantonese egg pasta, slippery wonton wrappers from China’s south and thick dumpling skins beloved in Beijing.

When the five-starred flag of the People’s Republic of China replaced the Union Jack on July 1, 1997, it rained and rained, the water rising fast along Queen’s Road and its tributaries. Some people took the deluge as an omen of Communist control, others as a purifying ritual to cleanse Hong Kong of Western imperialism.

The storm held no greater meaning for To Wo, who ran the noodle shop with his family. To still had to work every day of every year, feeding dough into clanging machines and emptying so many bags of flour that everything was dusted white, even the shrine to the kitchen god.

In the 25 years since the handover, the only constant has been change, both defined and defied by the people of Queen’s Road, Hong Kong’s most storied avenue. All around them, a city has been transformed: by the dizzying economic expansion of mainland China threatening to make this international entrepôt unnecessary, but also by the crushing of freedoms by Hong Kong’s current rulers, who have filled jails with young political prisoners.

At age 20, To escaped privation in southern China to settle on Queen’s Road, the first thoroughfare built by the British after they seized Hong Kong as spoils from the Opium War.

Named for Queen Victoria, the road traced the shoreline of an avaricious colonial power. As the institutions of empire — banks, trading houses, schools, places of worship — sprouted along it, Queen’s Road was evolving, each influx of new arrivals reshaping its character. For all the permanence of the road’s landmarks, its people were less grounded, with scant control over the city’s future.

In 1997, the Chinese government promised Hong Kong significant autonomy for 50 years to preserve the liberties that made it a global financial capital, not to mention one of the most thrilling metropolises on the planet.

As long as To had been there, Queen’s Road and its narrow alleyways had been a global crossroads. There were financial houses built on fortunes from the opium trade, gold shops promising solid investments for survivors of political turmoil, European luxury labels and merchants of shark’s fin and herbs used in traditional Chinese medicine.

In the first few years after the handover, legislators reveled in a power they had lacked for most of British rule, in a building designed by architects responsible for a part of Buckingham Palace. At the High Court, on a stretch of Queen’s Road called Queensway, judges wore wigs in the British fashion. The business establishment, drawn from the elite of Shanghai, London and Mumbai, among other cities, felt secure in the rule of law.

For more than a decade, Beijing largely abided by this political accommodation governing Hong Kong, called “one country, two systems.” The deadline of 2047, when Beijing would take full political control, seemed suitably distant, even if Hong Kongers have a habit of angling with forward intent.

The past three years have compressed time. In 2019, millions of protesters marched on Queen’s Road and other avenues, just as they had done in the past to thwart unpopular government restrictions. This time, clashes between the police and protesters severed any filaments of trust. For months, tear gas, pepper spray and rubber bullets enveloped commercial hubs. A two-year-old national security law has criminalized dissent, with people arrested for clapping in support of an imprisoned activist.

Now, halfway to 2047, Hong Kong has entered an uncertain purgatory. Its demise has been proclaimed before. Each time — after plagues and communist-backed riots, British repression and pre-handover jitters — the territory has regenerated itself.

A metropolis rivaling New York, Tokyo, London will not disappear overnight. But Beijing’s vow to keep the city in a political bell jar for 50 years has been shattered. The poor in Hong Kong are getting poorer, and the numbers rushing to leave have surged.

The seismic shifts in Hong Kong are forcing residents to reflect on what it means to be from this ever-evolving place. Along Queen’s Road — the oldest avenue in a city wired for reinvention — this question of identity resonates very differently for a politician, a protester and a noodle maker.

“Everything in Hong Kong has changed,” To said. “We all have different fates.”

On June 30, 1997, as “God Save the Queen” played one final time, Eunice Yung, then a high school student, was sulking at home in an apartment along Queen’s Road. Disappointing test results, which precluded a university spot in Hong Kong, occupied her mind.

Like many children born to recent arrivals, Yung began working when she was 4 or 5 years old, sitting with her great-grandmother at a table popping metal disks into the backs of toy magnets. Walking to her Catholic school, Yung would pass markets on Queen’s Road selling dried seafood and a temple where fisherman came to worship by boat, back before reclamation pushed the avenue inland.

Yung eventually found a university spot in Vancouver to study computer science. Unwittingly, she joined a stream of Hong Kongers emigrating for fear of the territory’s new rulers.

After each paroxysm in China — the fall of the Qing dynasty, the Communist takeover, the Cultural Revolution, the Tiananmen massacre — Hong Kong’s population swelled with refugees. The years leading to the handover, when hundreds of thousands of people fled for safety in the West, were the only time, until now, when the population declined.

Yung wasn’t in Canada because she was scared for Hong Kong. She returned home, earning a law degree and appearing in court on Queensway. In 2016, she won a seat in the Legislative Council nearby as a member of a pro-Beijing political force.

Yung, 45, has decried artwork in government-funded museums that disparages the Chinese Communist Party. She said that public ridicule of China’s leaders is the result of “people losing their minds.”

“Some of the foreign press say that ‘China is always a monstrous thing, and you are under their control and you have no freedom,’” Yung said. “But in Hong Kong we have to face the reality that we are part of China.”

Without evidence, pro-Beijing politicians have accused those who joined protests of colluding with the CIA. The fearsome security law has led unions and newspapers to shutter for fear of lifetime prison sentences. Nearly 50 politicians and democracy activists have been imprisoned under the new rules. They will appear at the High Court on Queensway later this year.

Today, there are no mass protests on Queen’s Road or anywhere else in Hong Kong.

“I think Hong Kong is still a very free city,” Yung said. “These kinds of demonstrations, if we allow them to a certain extent, it will damage our feelings to our country.”

Hong Kong has been cleaved between those who supported the protesters and those who worried that Hong Kong’s business-friendly reputation was destroyed. In 2019, HSBC, Hong Kong’s most venerable bank and an early paragon of globalization, was accused of closing an account linked to pro-democracy crowdfunding. Protesters splashed red paint on the giant lions guarding the bank’s headquarters on Queen’s Road.

“When people teach their kids to disrespect their country, tell them we are going to overthrow our government, it does damage,” Yung said. “Rather than expression without limits, we should uphold the dignity of our country.”

On July 1, 2019, the anniversary of the handover, hundreds of thousands of Hong Kong residents rallied for a pro-democracy march along Queen’s Road. There were middle class families with thermoses of water, pensioners in undershirts and students holding yellow umbrellas symbolizing the protest movement.

Breaking away from the crowds, Brian Leung turned onto a side street that led to the new Legislative Council building, joining other protesters who hid their identities behind masks. They besieged the building, shattering glass, twisting metal gates and scrawling anti-communist party graffiti.

As police closed in, Leung clambered onto a table, ripped off his mask and delivered a democracy manifesto. He was the only protester who showed his face.

The son of migrants from China who never finished high school, Leung, now 28, exemplified the promise of Hong Kong. Growing up in public housing, he became the first member of his family to attend the University of Hong Kong.

It was a time when many Hong Kong youth felt proud of their dual identity: Chinese, yes, but a special kind who cherished British common law and custardy egg tarts with Portuguese provenance.

When Beijing held the Summer Olympics in 2008, Leung cheered the teams of both Hong Kong and China.

“I think we all wanted to give China a chance, and we thought with the return to the motherland, we in Hong Kong could be part of this great nation,” he said.

Hong Kong civil society, powered by youth, made a difference. A group of teenagers helped convince the government to shelve a pro-Beijing curriculum.

The summer marches of 2019, like a student sit-in campaign five years before, led to a more poignant denouement. Police responded to the leaderless protesters with increasing force, arresting thousands of teenagers. By the time the coronavirus pandemic restricted gatherings in 2020, a hush had fallen over Hong Kong.

Today, only 2% of Hong Kong youth consider themselves to be “Chinese,” a local poll found. More than three-quarters identified as “Hong Kongers.” There is pride in Cantonese, the patois of Hong Kong, rather than the Mandarin of the mainland.

“When it became clear that China was no longer interested in liberal reforms, we began to question our identity as Chinese,” said Leung, who edited a collection of essays called “Hong Kong Nationalism.” “We began to think, ‘we are Hong Kongers.’”

For the millions who fled upheaval in China, Hong Kong served for more than a century as a refuge but also a way station to a better place. Eventually, Hong Kong’s transience settled. The territory became home to millions of Chinese, many of whom adopted Western names for the ease of the British bureaucracy: Kelvin and Fiona, Gladys and Alvin, Brian and Eunice.

Now, Hong Kong is shedding residents. In one month this year, about as many people departed from the airport as migrated to Hong Kong in all of 2019. Continuing coronavirus restrictions mean that hardly anyone is coming. Many of those activists not in prison are in exile. Taxi drivers, accountants and professors have left for new lives abroad.

Hours after police cleared the Legislative Council with tear gas in July 2019, Leung left Hong Kong, his heart thumping as the plane lifted into the air.

“I couldn’t stop the tears,” said Leung, who now lives in the United States. “I love Hong Kong so much. That’s why I was fighting for it and that’s why I had to leave.”

He has not returned since.

‘Star Wars’ filming locations in California that you can visit

‘I will become a dictator, take action,’ says MK Stalin