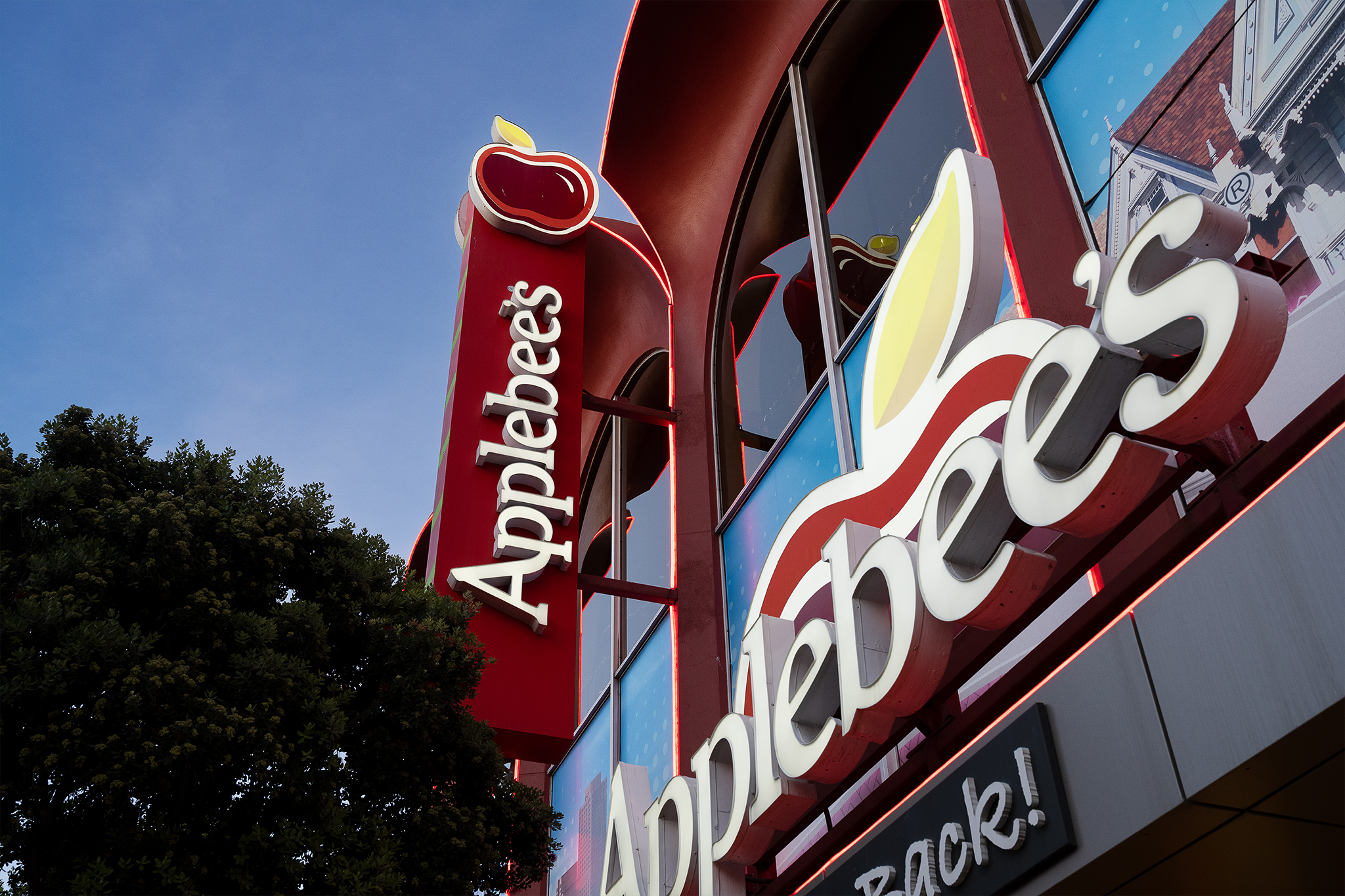 Sandwiched between a souvenir shop and the Ripley’s Believe It Or Not is a little joint you may not have heard of. Suspended high above all the Fisherman’s Wharf hubbub, it boasts both postcard-worthy views of San Francisco and great happy hour deals.

Stay with me here. Chain restaurants aren’t exactly the pride of San Francisco, but with inflation through the roof, everyone’s looking for ways to save money. I will try any happy hour once.

My colleague and I pulled up under the shining beacon of the Applebee’s sign on a Thursday just before 4 p.m. and followed arrows up a flight of bright red stairs. At the top, our server seated us immediately.

The sight of a mostly-empty Applebee’s at golden hour, with all its red vinyl booths and cheesy San Francisco-themed murals, is admittedly a little depressing. The best antidote to this is to sit as close to the windows as possible. That way, you can train your eyes on the view, avoiding the harsh reality of the 2016 Justin Bieber single playing softly over the speakers.

While the best seats in the house — the outdoor bar — were closed on the afternoon we visited, our indoor table was still pretty decent. We’re talking a floor-to-ceiling window seat looking out over the whole of Pier 45.

“It’s beautiful,” I gasped, a sentence I never thought I would say in an Applebee’s.

When my margarita arrived, it was the size of my head. I struggled to lift the heavy goblet to my lips with one hand. It was quite watery (not aided by an absolute onslaught of ice cubes) and only bore the slightest suggestion of salt on the rim, but hey, it was $8.

It was better, at least, than the chain’s famous “Dollarita” — a watery $1 margarita that made broke college kids across the country very excited a few years ago. I have an unfortunate memory of a time in college when I visited the Fisherman’s Wharf restaurant, drank at least four or five Dollaritas, and was outraged by my subsequent sobriety: I felt nothing.

More thrilling was when our appetizers arrived. I wouldn’t dare to order off the regular dinner menu at Applebee’s, but it’s difficult to go wrong with a crispy, salty mozzarella stick swathed in marinara. Or a humble tortilla chip drowned in creamy dip. Particularly after a “mucho”-sized drink or two.

Watching the sun set over the Golden Gate Bridge to the west, and with Alcatraz poking out from behind Musée Mécanique and the Fisherman’s Wharf sign, my margarita started to taste a little better. I made eye contact with a seagull and watched the sails of a sailboat fluttering in the wind. I almost forgot I was inside an Applebee’s.


That is, until my attention drifted back to the menu in front of me, reminding me urgently that I was “Eatin’ Good in the Neighborhood.”

Our check, which I paid with a tablet that kept trying to coerce me into paying $1.99 to play a game of Batman-themed trivia, came out to $35.22 before tip. Not bad, considering you’d pay that much for two cocktails alone at some bars in San Francisco.

Now, is it worth braving a bleak chain restaurant when you could be drinking at one of our city’s many wonderful local bars instead? I can’t answer that for you. But if you find in your heart the answer is yes, come to Applebee’s for the mozzarella sticks; stay for the view.

Nimble’s sold out activewear which double as swimmers returns

Justice Shouldn’t Hurt: More NSW children are reporting abuse than would fit in…