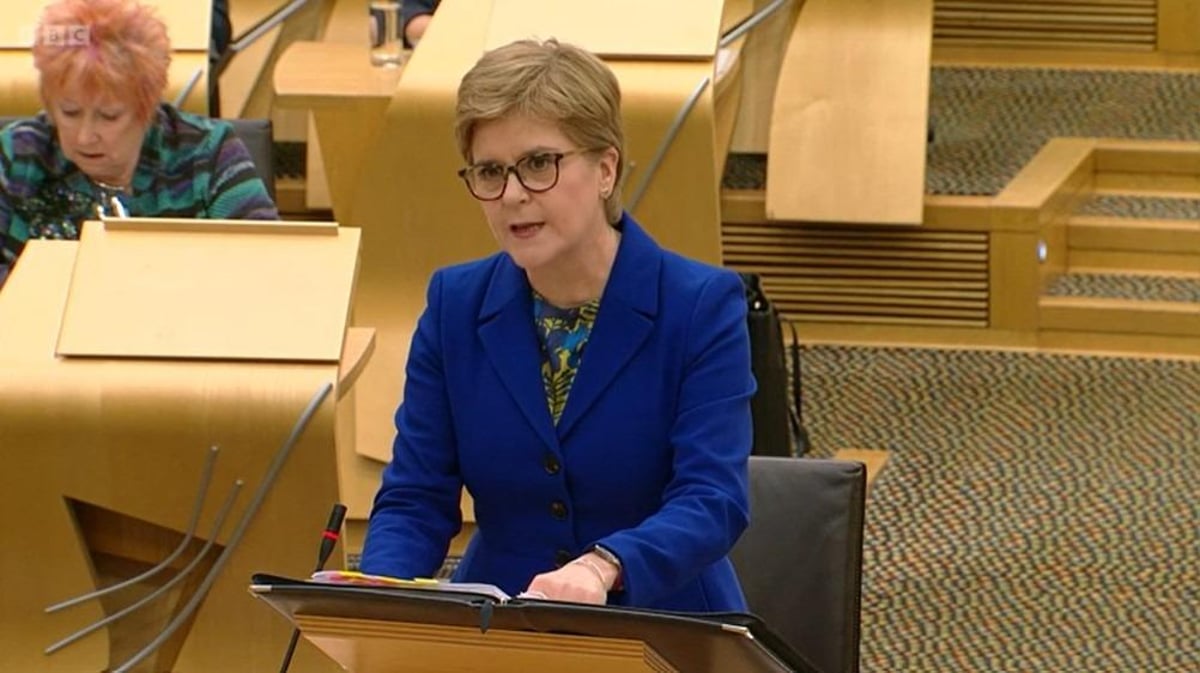 The First Minister said emergency legislation on a rent freeze until March next year across Scotland will be introduced “within three months” as she said Scottish Parliament will have to “act at pace”.

The update on the halting of social and private rent prices comes after Nicola Sturgeon announced the measure in her programme for government at the start of this week.

An exact date for the implementation of the measure has not been decided upon, however, details will be announced “very soon”, according to the First Minister.

An Official spokesperson for the First Minister said the way the government will enforce the halting of rent prices on landlords will be laid out within the emergency legislation.

Tuesday, when the rent freeze was announced, will be the official “stop day” of rent prices increasing, according to the spokesperson.

“There is an imperative to help people in the cost of living crisis and the detail will be within the legislation”, said the spokesperson, “My understanding is to to legislate as quickly as practically possible.”

In the Holyrood Chamber, the First Minister said: “The emergency legislation will be introduced very soon. We haven’t yet determined the date for that but we need to introduce it soon as parliament needs to act at pace.

“We want that legislation to be passed within three months so that the freeze I announced will be active at the date it was announced.”

Ms Sturgeon also attacked the energy crisis plans announced by Prime Minister Liz Truss, saying oil and gas companies should be paying for some of the massive costs rather than just consumers and taxpayers.

The Prime Minister set out an emergency package costing tens of billions of pounds on Thursday to help shield households and businesses from soaring energy prices.

It includes an “energy price guarantee” preventing the average annual family bill in Britain soaring past £2,500 for two years from this autumn.

Ms Truss ruled out a fresh windfall tax – a move favoured by both Labour and the SNP – under her energy plans announced in the House of Commons on Thursday.

Energy announcement: Liz Truss announces price cap will be fixed at £2500 a year…

“People are seeing soaring energy costs because of a broken energy market and the utter incompetence of this UK Government,” she said.

“Lastly, on that issue as things stand all of the costs of what has been announced today are going to fall on consumers and taxpayers, when oil and gas companies making windfall profits should be making a contribution.

“So I think you can see who’s side the UK Government is on today.”

She said she had not yet seen all the detail of the plan but is aware of the headlines.

The First Minister continued: “It does not represent a halt to the rise in energy bills.

Ms Sturgeon also committed to an ongoing review of the emergency legislation on rents her programme for government will introduce with the hope of extending temporary measures beyond March.

Scottish Labour leader Anas Sarwar said he will “push” the First Minister on implementing a rent regulator to make sure there is not “excessive increases” when the freeze is lifted.

Asked by Sarwar if she will commit to a plan from Labour for halving costs to rail fares, the First Minister said any plans on this must be taken with consideration of the Scottish budget review.

Her comments come after deputy First Minister John Swinney announced £500 million in cuts will have to be made to the Scottish Government’s budget.

Ms Sturgeon said: “We have confirmed, as I did on Tuesday, a freeze on ScotRail fares until the end of March.

“The Deputy First Minister said yesterday that we will be considering, in the context of our emergency budget review, extending that further.

“If we want to spend more on anything, we have to find other places in our budget to take that from and that process started yesterday.

Mr Sarwar said he welcomes an emergency budget review, however, he urged the First Minister to be “bolder and more ambitious” in her emergency measures as he called for cross-party input for the budget review. The Scottish Labour leader said the Scottish Government has to be transparent and take on a “Team Scotland” approach.

Mr Ross also quizzed the First Minister about the ferries scandal involving Ferguson Marine, less than an hour after former finance secretary Derek Mackay had been questioned by a Scottish Parliament committee.

The shipyard was nationalised to save it from administration and the Glen Sannox and the as-yet-unnamed hull 802 are projected to cost two-and-a-half times more than planned and be delivered five years late.

Critics have claimed the original contract to commission the two ferries was rushed to allow for an announcement to be made at the SNP conference in 2015, but Mr Mackay rejected the assertion while giving evidence.

Ms Sturgeon said on the Ferguson decision: “No, I don’t regret the actions this Government took to save Fergusons shipyard and to ensure that those working there still have a job. That is important and of course we will continue to take action to ensure that the two ferries are completed and that the work continues.”

The Queen under medical supervision; doctors concerned over health

National Trust: Government going in ‘opposite direction’ to protecting nature