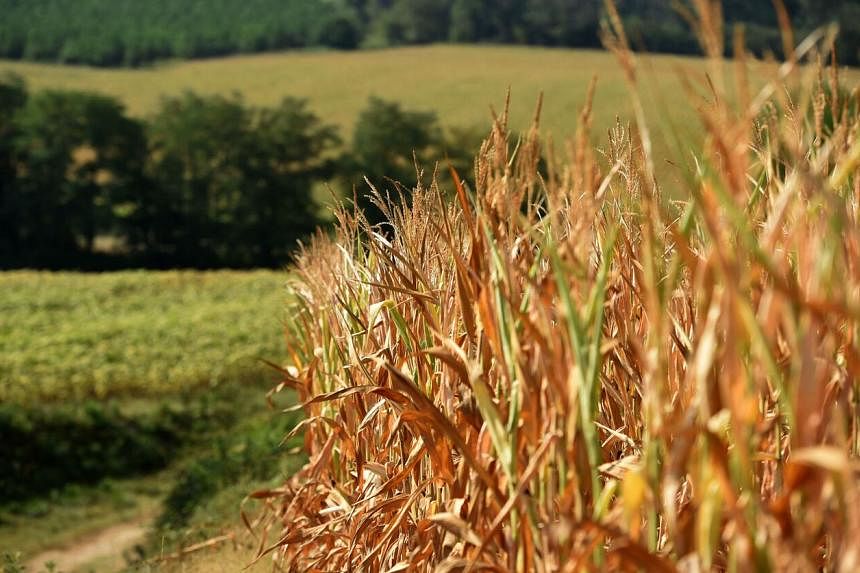 CHICAGO (BLOOMBERG) – While the outlook for global crops is improving from the tumultuous weeks after Russia’s attack on Ukraine, the threats of drought, flooding and blistering heat are keeping supplies tight and prices elevated.

Crop futures have retreated to pre-war levels, and the United Nation’s monthly measure of food prices sank the most since 2008. That’s offering some relief to consumers who have faced rampant food inflation since the start of the pandemic. Still, the war is putting more pressure on farmers from the US to India to replace crop losses and shipments from Ukraine – a key supplier to poorer nations in the Middle East and Africa.

How much they can provide is in question. Major producers like the United States, Brazil and Argentina have been facing yield issues over the last few years thanks to scorching heat, supporting prices at higher levels. Global production of corn and soybeans in 2021-2022 fell short of initial forecasts by 45 million tons. The US Department of Agriculture on Friday (Aug 12) is expected to cut its outlook for this year’s US corn and soybean yields, according to analysts polled by Bloomberg, while wheat likely fared better.

“Unlike recent years every single bushel of production matters and even a small yield loss of 1-2 per cent relative to trend is concerning given current tightness in US and global balance sheets,” said Ben Buckner, grains analyst for AgResource Co.

In Europe, the searing heat could shrink the European Union’s grains harvest by 5 per cent versus last season, according to the European Commission. Corn crops have been particularly battered by the scorching weather, boosting the bloc’s import needs and increasing costs for livestock farmers. Agriculture heavyweight France is suffering its worst drought on record and fields are drying up across other key producers like Germany and Romania.

The situation is already critical, according to Vincent Braak, crop analyst at Strategie Grains. “Even if rains come back, for corn production, it is far too late for good yields now because pollination is done almost everywhere. We are worried for all summer crops. Even with irrigation, this temperature is totally crazy.”

This year’s French corn harvest is estimated at 12.66 million tons, down 19 per cent year-over-year, the country’s agriculture ministry said in a report. If confirmed, it will be the lowest since 2016, according to USDA data. In India, temperatures soared in March to the highest ever for the month on record going back to 1901, shriveling the country’s biggest winter-sown crop during a crucial growth period. That prompted authorities to prohibit wheat exports in May to safeguard domestic supplies and to control rising prices.

Rice, another important Indian crop, was planted on a smaller area so far this season due to a lack of rainfall in some main growing areas, including West Bengal and Uttar Pradesh, which account for a quarter of the country’s output. This will potentially reduce production and may trigger restrictions on shipments from India, which accounts for 40 per cent of global rice trade.

Soybean futures in Chicago, which rose above $17 per bushel after the invasion, climbed 2.1 per cent Tuesday to US$14.2875, while corn and wheat also gained.

The war in Ukraine is also impacting future harvests. So far, grain exports are down 49 per cent year-over-year and seeding has been compromised. In a sign of shifting trade flows, Egypt, the world’s largest wheat importer, is buying much more French wheat than normal for this time of the year.

There are exceptions: Australia has a positive prospect for its wheat crop, with growers expected to pull off a decent crop this season, after favorable conditions encouraged farmers to ramp up planting to near-record levels. While those supplies won’t be ready for harvest for a few months, Australian exporters are still shipping out surplus grain from previous seasons following two consecutive years of bumper production. Canada, world’s top canola grower and a major wheat exporter, is also having a good growing season so far.

Russia is set to be the biggest market winner with a massive harvest, though shipments are slower than usual as exporters must find vessels, crews and insure ships.

There is also some good news in the form of cooling demand from China, the world’s biggest grains buyer. China’s corn imports in the first half of the year sank 11 per cent from a year ago, while wheat imports during the same period fell 7.8 per cent and soybeans 5.4 per cent from the previous year, according to customs data. Poor margins in the country’s massive livestock sector also curbed appetite for the crops as feed ingredients, and China’s imports of palm oil have weakened as its Covid Zero policy curbs demand from the restaurant and catering industries.

When the war broke, prices spiked on the assumption that exports from the Black Sea would be completely stopped. Now, as more vessels are finding their way out, most of the “war premium” has disappeared from futures. One big question is if shipments will continue to increase enough to offset smaller than expected crops elsewhere.

For the next harvests this year and in 2023, the USDA is forecasting a record global soybean crop, but that will rely on record production from Brazil and the US and the highest output from Argentina since 2018. On corn and wheat, output is expected to be smaller that the previous season.

For futures to sink back to previous years’ levels, both hemispheres would need back-to-back bumper harvests, something that hasn’t happened since 2013-14. A lingering La Nina weather pattern continues to affect crops in parts of South America, making it less likely to happen this year.