Fore you, Canada! People golfing in Halifax as rest of country braces for winter wallop 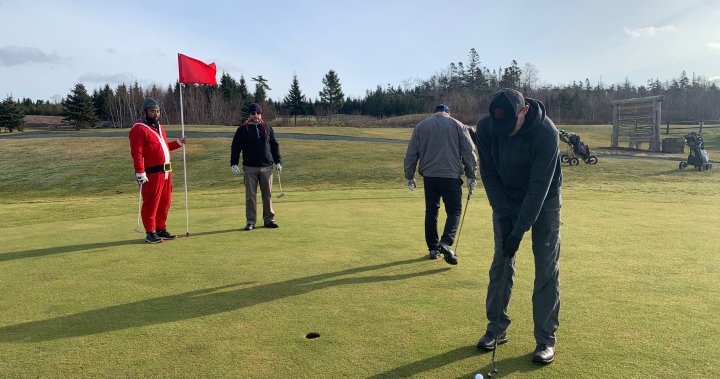 It’s a very different scene across Canada as the holidays arrive: while parts of the west coast are still digging out from heavy snowfall that’s brought air travel to a standstill, Maritimers are hitting the links.

Yes, on a balmy Thursday just three days before Christmas, a group of friends was enjoying a day of golf at Indian Lake Golf Course in Hatchett Lake, N.S. outside Halifax.

“There’s only so many opportunities that you can get out at this time of the year,” said golfer Mark Royale between holes.

“Wind’s not blowing too heavily. As long as the wind chill factor is reasonable, it’s not bad to come out as long as you have proper layers on.”

Holiday storm looms as winter kicks off in Canada. What can we expect?

The contrast is especially striking considering a slew of weather warnings have been issued for Ontario and Quebec — a storm described by Environment Canada as a “crippling blizzard.”

This storm has never been about the snow totals for most of the GTHA. Wind and flash freeze take headlines Friday with blizzard conditions developing in some areas later Friday and lasting into Saturday. #ONStorm pic.twitter.com/04NY3pue0s

The course manager at Indian Lake Golf Course, Doug MacLeod, said they’ve noticed a change in golfers over the years. While people used to be leery of winter golfing, that’s not the case anymore.

“But right now at around zero, low plus, low minus a little bit, they don’t seem to mind as much. And with clothing improving, it allows them to put more layers on and still swing freely.”

The course has tee decks in place to protect the course year-round. That means teeing off in the winter isn’t so out of the ordinary.

“Winter golf is an interesting thing. Where people would normally hit into the water, they can now bounce it across the ice. It creates some interesting shots, for sure,” said MacLeod.

The golfers — and Maritimers in general — shouldn’t be laughing for long though. A storm is also expected to arrive in the region mid-Friday into Saturday.

A white Christmas is not in the cards for Nova Scotians, instead, the province will receive heavy rain and strong winds.

Once that passes though, diehard golfers plan to return to the links.

“As long as it’s still snow-free and it’s reasonably mild as it is right now, it’s something I’ll probably keep up doing, like, even deep into the winter for sure,” said Eddie Kiiru with his golf club in hand.