Former Bihar MLA, a dreaded Mafia who was on the run for two decades arrested near India-Nepal Border 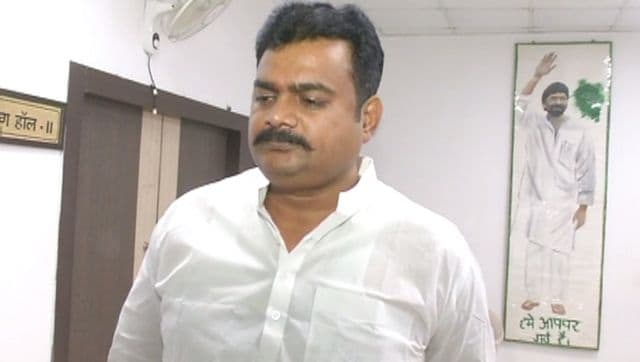 Tiwari’s political career started in year 2000 when he defeated Bhupendra Nath Dubey of SAP in 2000. In 2006, his mother Kanti Devi was elected Block Head from the local block and continues to hold the post.

Patna: Continuing the crackdown on listed criminals and gangsters, UP police on Friday nabbed a former legislator from Bihar assembly infamous for shooting at policemen, wanted for over two decades in Raxaul near the India-Nepal border.

The accused, Rajan Tiwari was first elected as MLA in the year 2000 from Govindganj constituency in Motihari.

However, his criminal background goes back to 1998 when he had allegedly opened fire at police personnel in UP’s Gorakhpur. He had a non-bailable warrant issued against him since 2005 and was carrying a bounty of Rs 25,000 on his head, said police officials.

The action came after a joint team of UP and Bihar police intercepted him when he was allegedly trying to escape through India-nepal border in Raksaul’s Haraiyya police station area.

Police records accessed by firstpost revealed that Tiwari had not appeared in court since past 17 years despite having a non-bailable warrant and charges under gangster act since 1998. “He was recently attached in the list of 61 most dreaded mafias of UP and Bihar, shared by the Director General of Police- in Uttar Pradesh,” UP police official told the firstpost.

“The former MLA from Govindganj assembly seat in Bihar’s East Champaran district was wanted in a 1998 case pertaining to the opening of fire on police personnel in Gorakhpur in Uttar Pradesh.,” East Champaran’s Superintendent of Police Kumar Ashish told PTI.

If sources are to be believed, Tiwari indulged in criminal activities during his college days when he joined dreaded gangster Shri Prakash Shukla in the mid 1990s, He became national news after he was allegedly found involved in the attack on a UP government MLA Virendra Pratap Shahi.

Tiwari’s political career started in year 2000 when he defeated Bhupendra Nath Dubey of SAP in 2000. In 2006, his mother Kanti Devi was elected Block Head from the local block and continues to hold the post. His elder brother Raju Tiwari is crurrently MLA from Govindganj constituency in bihar. He has been an active party worker to JDU and BJP.

What’s next for Ashok Gehlot, now ruled out as Congress president?

What’s next for Ashok Gehlot, now ruled out as Congress…