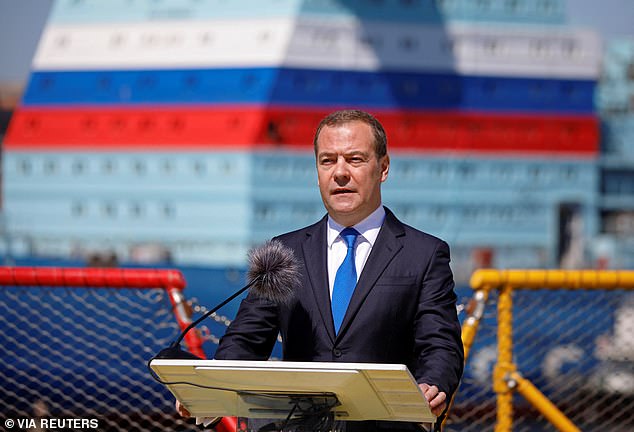 Former Russian president Dmitry Medvedev has warned that Ukraine and the West will face a ‘Judgement Day’ response should they attempt to militarily dispute Russia’s control of Crimea.

The refusal of Ukraine and Western powers to recognise Moscow’s ownership of the peninsula poses a ‘systemic threat’ for Russia, the former president said yesterday, before declaring the Kremlin would hit back with maximum force if the territory is attacked.

‘Judgement Day come very fast and hard. It will be very difficult to hide,’ he announced, according to Russia’s TASS news agency.

Russia annexed the Black Sea peninsula of Crimea from Ukraine in 2014 after a pro-Moscow president in Kyiv was toppled amid mass street protests.

The Kremlin then also backed pro-Russian armed separatists in the Donbas region of eastern Ukraine, which its army has since supported to seize the Luhansk and much of the Donetsk oblasts since the February 24 invasion.

Medvedev’s comments were aired a day after a Ukrainian official suggested that Crimea could be a target for U.S.-made High Mobility Artillery Rocket Systems (HIMARS) missiles, recently deployed by Kyiv with great effect as the Ukrainian armed forces continue to battle Putin’s troops. 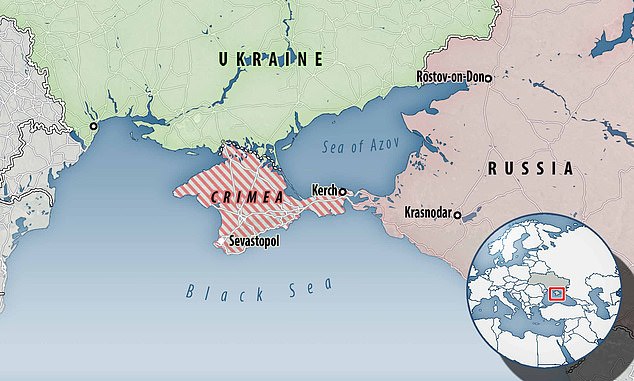 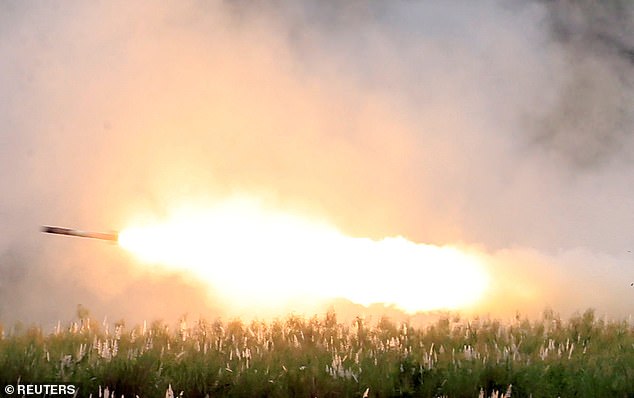 Medvedev’s comments were aired a day after a Ukrainian official suggested that Crimea, which most of the world still recognises as part of Ukraine, could be a target for U.S.-made HIMARS missiles (pictured) 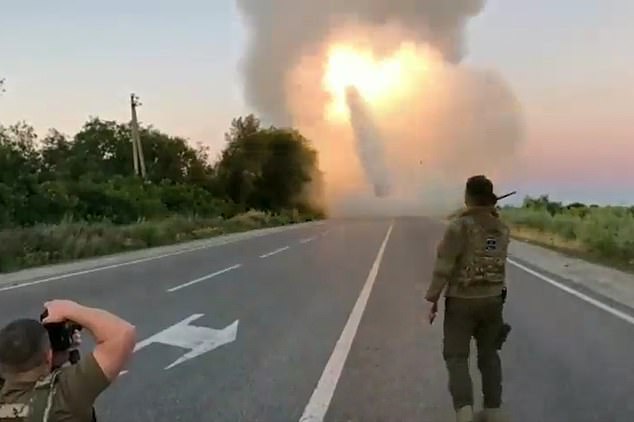 Ukrainian troops direct the firing of an American made HIMARS missile 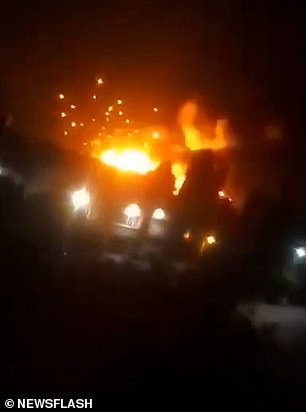 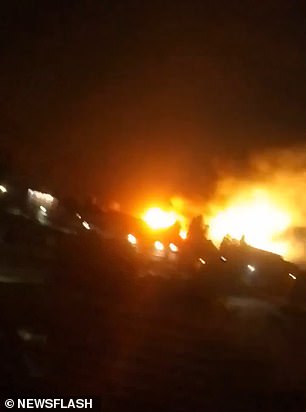 Earlier on Sunday, Interfax news agency quoted Medvedev – who now serves as deputy chairman of the Russian Security Council – as telling World War Two veterans: ‘If any other state, be it Ukraine or NATO countries, believes that Crimea is not Russian, then this is a systemic threat for us.

‘This is a direct and an explicit threat, especially given what has happened to Crimea. Crimea returned to Russia.’

Medvedev did not elaborate on his comments, but has previously employed Moscow’s tried and tested nuclear sabre-rattling tactic, warning the U.S. and other Western nations of the dangers of attempting to punish a nuclear power.

Ukrainian President Volodymyr Zelensky yesterday afternoon condemned Medvedev’s Doomsday comments as ‘intimidation’ and said it was Russia that would eventually face a Judgement Day, ‘not in a figurative sense, not as loud talk, but literally’.

Medvedev served four years as the Russian president from 2008-2012, but there is little doubt he operated as a puppet frontman while the government was essentially ran by Putin, who occupied the position of Prime Minister.

The former president has previously said Russian forces will continue fighting until they fulfil their stated goal of ‘denazifying’ and ‘demilitarising’ Ukraine.

He predicted the conflict would ‘undoubtedly lead to the collapse of the existing regime’ in Kyiv under the weight of the Russian offensive.

Medvedev’s Judgement day comments came a day after Vadym Skibitskyi, a Ukrainian military intelligence official, was asked if U.S.-made HIMARS rockets could be used on targets in Crimea.

He said Russia had carried out strikes on Ukrainian territory from Crimea and the Black Sea, reasoning those positions were thereby justified targets as well.

Crimea is of particular strategic importance to Russia as it includes the headquarters of its Black Sea fleet at Sevastopol. 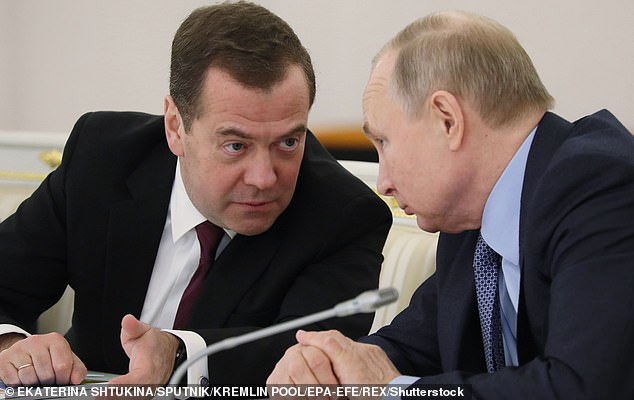 Medvedev (L) served four years as the Russian president from 2008-2012, but there is little doubt he operated as a puppet frontman while the government was essentially ran by Putin (R), who occupied the position of Prime Minister while Medvedev was in office 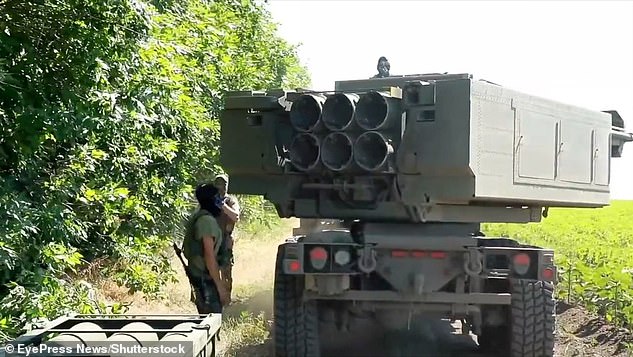 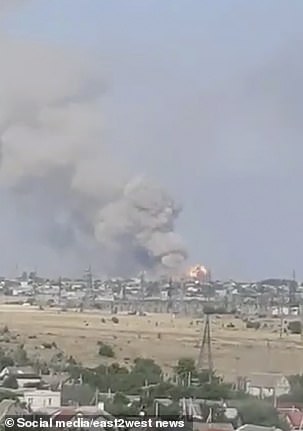 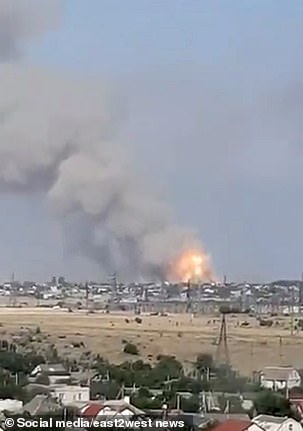 U.S.-supplied HIMARS rockets have been used to great effect by Ukrainian forces since their delivery last month, after Kyiv said it needed the weapons to level the playing field with Russian batteries in the Donbas.

The systems are in demand for their ability to carry out precision strikes over long distances – more than double the range of the howitzers the West has already sent.

The system is capable of launching multiple, precision-guided rockets which are said to have been effective in evading Russian missile defence systems, enabling Ukraine’s armed forces to inflict considerable damage on infrastructure and Russian military equipment.

A senior U.S. military official last week said in a statement at the Pentagon: ‘Although [Ukrainian forces] are not shooting the HIMARS at the front lines, they are having a very, very significant effect.

‘Ukrainians have been talking about a number of the targets [they] are hitting … they’re spending a lot of time striking targets like ammunition, supplies, other logistical supplies, command and control. And all those things have a direct impact on [Russia’s] ability to conduct operations on the front line.’