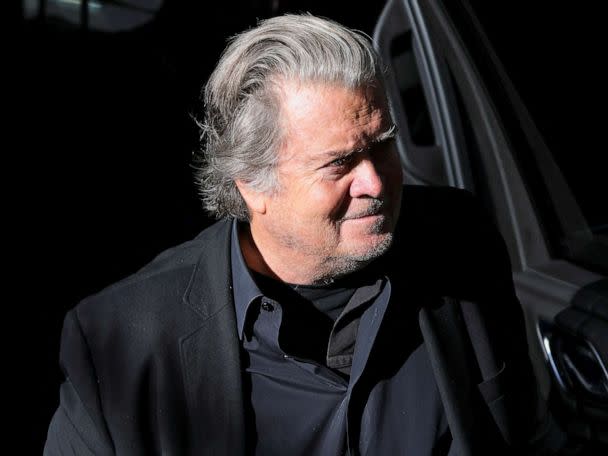 Steve Bannon, a onetime political adviser to former President Donald Trump, has been charged by authorities in New York with defrauding donors to the “We Build the Wall” fundraising campaign for a wall along the U.S.-Mexico border.

He spoke to reporters after arriving to turn himself in, saying the charges were “all about 60 days to the election.”

“This is an irony, on the very day the mayor of this city has a delegation down on the border, they are persecuting people here who try to stop them on the border,” Bannon said, referring to a fact-finding delegation New York City Mayor Eric Adams has sent to Texas following the decision by Texas Gov. Greg Abbott to bus migrants to New York.

The indictment charges Bannon and “We Build the Wall” itself with two counts of money laundering, which carries a maximum sentence of five to 15 years in prison. There are additional felony counts of conspiracy and scheme to defraud along with one misdemeanor count of conspiracy to defraud.

The state charges, brought by the Manhattan District Attorney’s Office, resemble federal charges for which Bannon received a pardon by Trump, and allege that Bannon and “We Build the Wall” defrauded 430 Manhattan-based donors out of $33,600. Across New York state, there were more than 11,000 donors defrauded out of more than $730,000, according to the indictment.

The pardon only applied to the federal case and does not preclude the state charges.

“Mr. Bannon took advantage of his donors’ political views to secure millions of dollars which he then misappropriated. Mr. Bannon lied to his donors to enrich himself and his friend,” New York Attorney General Letitia James, whose office participated in the investigation, said in a statement.

“It is a crime to turn a profit by lying to donors, and in New York, you will be held accountable,” added Manhattan District Attorney Bragg. “As alleged, Stephen Bannon acted as the architect of a multi-million dollar scheme to defraud thousands of donors across the country — including hundreds of Manhattan residents.”

Two Florida men, an Air Force veteran and a venture capitalist, indicted with Bannon in the federal case, pleaded guilty in April in connection with their role in the alleged scheme to defraud “We Build the Wall” donors.

Brian Kolfage and Andrew Badolato were charged in the scheme with Bannon. A fourth defendant, Timothy Shea, stood trial that ended with a mistrial.

Kolfage and Badolato are not named in the state indictment, but are referenced as co-conspirators 1 and 2, a sign they could have assisted Manhattan prosecutors build their case against Bannon.

The quartet allegedly bilked donors to “We Build the Wall” and used some of the $25 million raised on personal expenses, including a luxury SUV, a golf cart and cosmetic surgery, the federal indictment said.

“The defendants defrauded hundreds of thousands of donors, capitalizing on their interest in funding a border wall to raise millions of dollars, under the false pretense that all of that money would be spent on construction,” then-U.S. Attorney Audrey Strauss said when the charges were announced in 2020.

“My sole intent was to raise funds and donate those funds to the federal government,” Kolfage told the judge.

“And you promised that 100% of the money would be used to build that wall? Is that right?” Judge Analisa Torres asked.

“After keeping that large sum of money for yourself, you did not tell the IRS you received the money. Is that right?” Torres asked.

Paul Manafort, Trump’s one-time campaign boss, was charged with running a two-year scheme to obtain more than $19 million in residential mortgage loans based on fraudulent representations to various banks. The New York Court of Appeals ultimately threw out the case, deeming it too similar to Manafort’s federal conviction and therefore double jeopardy.

In the state case against Bannon, double jeopardy is not expected to apply because a jury was never convened to weigh the federal fraud charges over “We Build the Wall.”

Ken Kurson, a former editor of the New York Observer, associate of Jared Kushner and speechwriter for Rudy Giuliani, was pardoned by Trump in a federal cyberstalking case. Kurson eventually pleaded guilty to two state-level misdemeanors that accused him of spying on his former wife’s computer.

Kurson is due back in court next week so the judge can make sure he’s complying with his community service.

Kurson, in 2015, surreptitiously installed spyware on his ex-wife’s computer from his work computer at the Observer in 2015, according to the indictment.

“We will not accept presidential pardons as get-out-of-jail-free cards for the well-connected in New York,” Vance said in a statement at the time the charges against Kurson were announced in 2021.