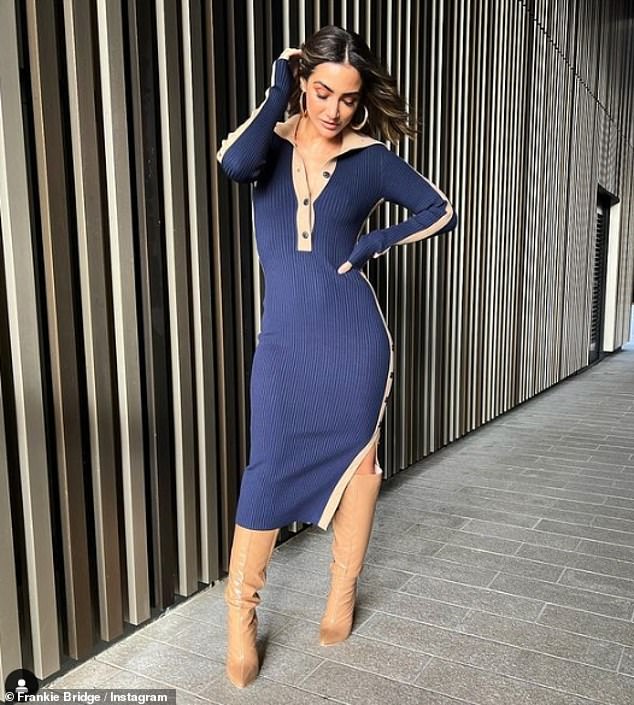 She’s known for her sensational sense of style.

And Frankie Bridge looked stunning as she posed in a blue and cream bodycon dress during her latest appearance as a panellist on Loose Women on Friday.

The Saturdays singer 33, told her Instagram followers that she loves the festive season but has enjoyed getting back to work for some ‘normality’.

Beauty: Frankie Bridge looked stunning as she posed in a bodycon dress to be a panellist on Loose Women on Friday

Routine: Frankie captioned her post ‘I love Christmas…. but it feels good to be getting back to some normality’

The stunning star styled her figure-hugging frock with a pair of knee-high brown boots.

She wore her brunette locks in loose waves and accessorised with a pair of gold hoops.

It comes after she returned to work at Loose Women on Wednesday for the first time in 2023. 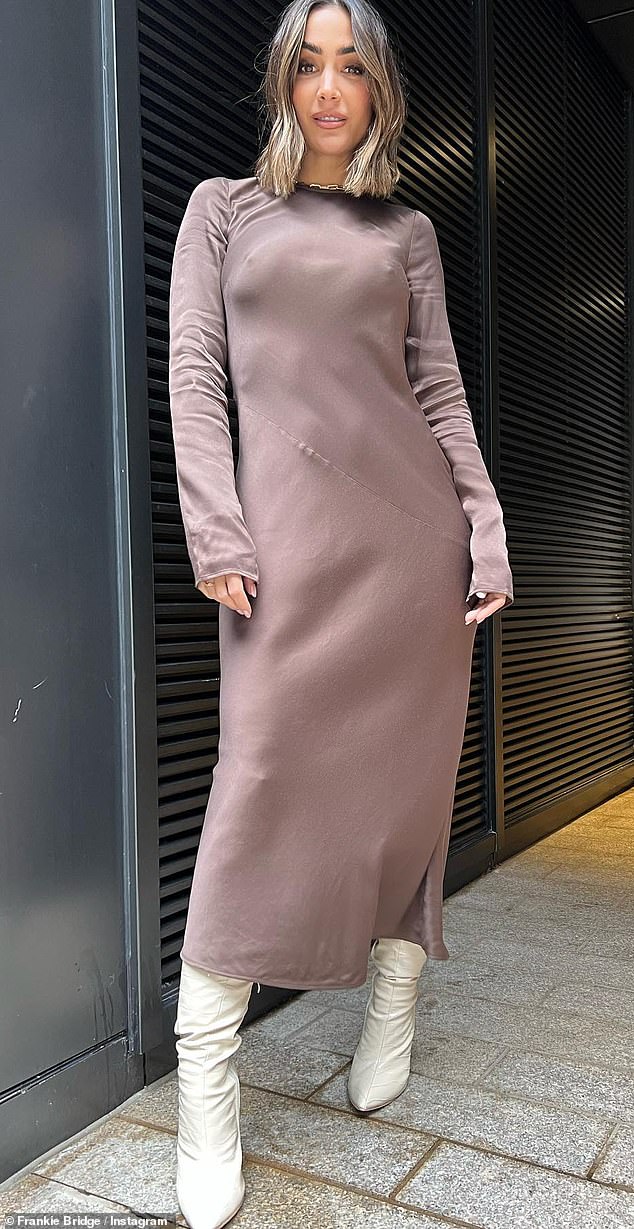 Stunning: Frankie Bridge, 33, was the epitome of chic as she returned to work at Loose Women on Wednesday for the first time in 2023

Frankie posed up a storm in a brown backless dress which hugged every inch of her sensational figure.

She captioned the snaps: ‘Back with my @loosewomen today… first of 2023 and it felt so good to get off my sofa and spruce myself up a bit!’.

The singer had previously entertained her fans as she shared some amusing moments from 2022 on Instagram last month.

Frankie could be seen dancing around in front of the camera in various locations as the looked back over the last 12 months in a short video.

She posted the clip online for her followers, writing: ‘I take my job very seriously… just not myself #bloopers.’

The video opened with the Loose Women panellist wearing a pair of colourful ears on a headband on her head as she pulled a face and waved her hands in the air.

She could then be seen wearing a white mask as she faced the camera before showing off her behind as she wore some red underwear over a pair of red and white sating pyjamas.

Elsewhere, the former I’m A Celebrity… Get Me Out of Here! star could be seen dancing on a beach in a flowing red dress, while in another scene she could be seen waving her legs in the air as she rolled around on her back in her home. 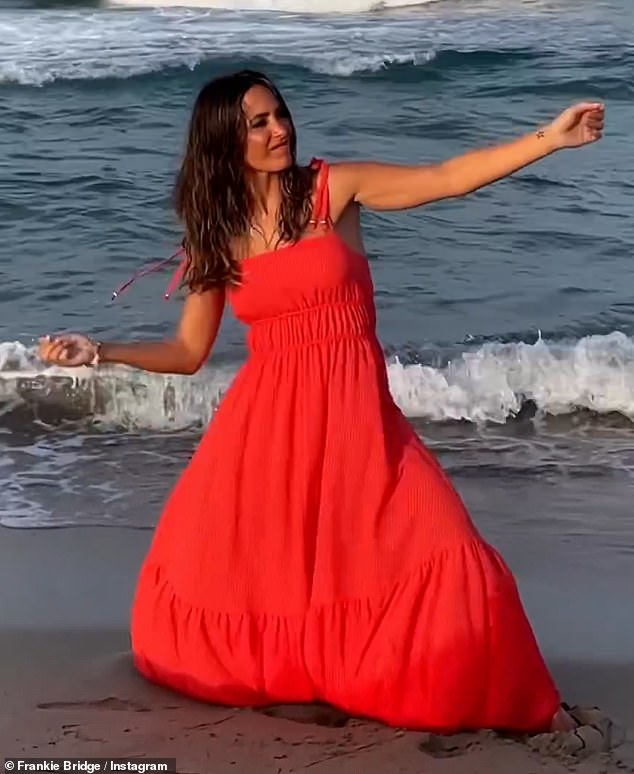 Larking about: It comes after the singer entertained her fans as she shared some amusing moments from 2022 on Instagram last month

Also in December, she shared an image of herself crying on social media.

Reflecting on her decision to post the picture, Frankie admitted she felt ‘pressure’ to feel ‘happy’ at Christmas after experiencing a ‘low moment’ earlier in December.

During an appearance on Loose Women, she explained: ‘Actually this time of year comes a lot of pressure. You can’t necessarily do exactly what you want to do, you’re travelling here, there and everywhere, you’re trying to keep everyone happy. 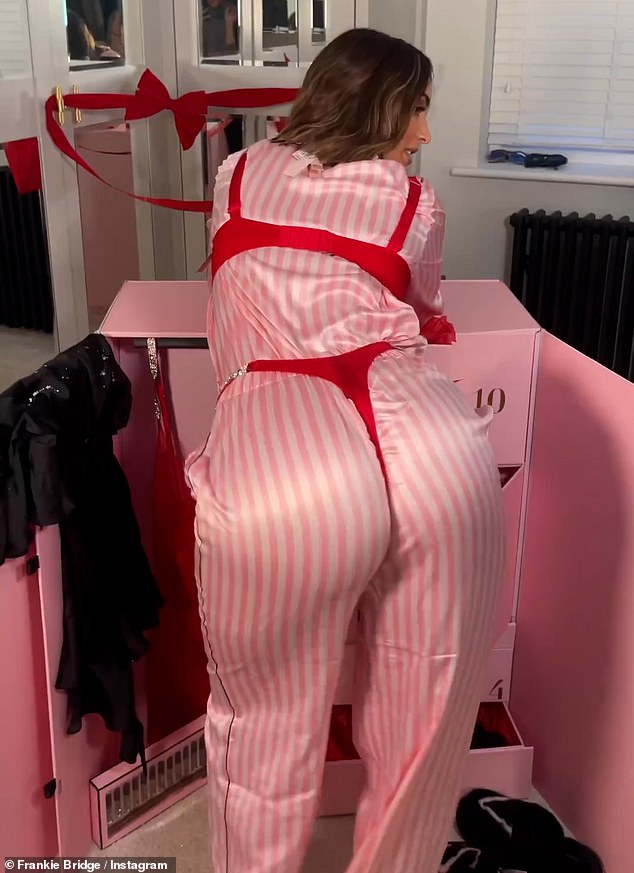 Joker: The singer could be seen dancing around in front of the camera in various locations as the looked back over the last 12 months in a short video in December

‘Although it is something I love, I find when I’m supposed to feel happy in a situation, I feel that pressure.’

She said she felt it was important to share the candid selfie to show her followers that she isn’t always out smiling and partying.

‘I am literally Mrs Claus, I love Christmas, I love the lead up to it, I love the decorations,’ the mother-of-two said.

‘I was just aware I had this low moment and I thought I’m gonna share it because all anyone’s seeing is me out having all my Christmas parties and out with the girls, and it all looks fun and games.’

On posting the tearful selfie, she added: ‘I wasn’t sure if should share in case I’d bring other people down if they’re feeling festive.’

Frankie went on to admit that she also finds the period between Christmas and New Year’s Day a ‘struggle’.

‘The time between Christmas and New Year is a struggle. You’re waiting for New Years, and I’m wondering if I’m meant to stuff my face or be on a juice cleanse,’ she said.

‘It should be about being with friends and family. But as we all know there are a lot of expectations.’ 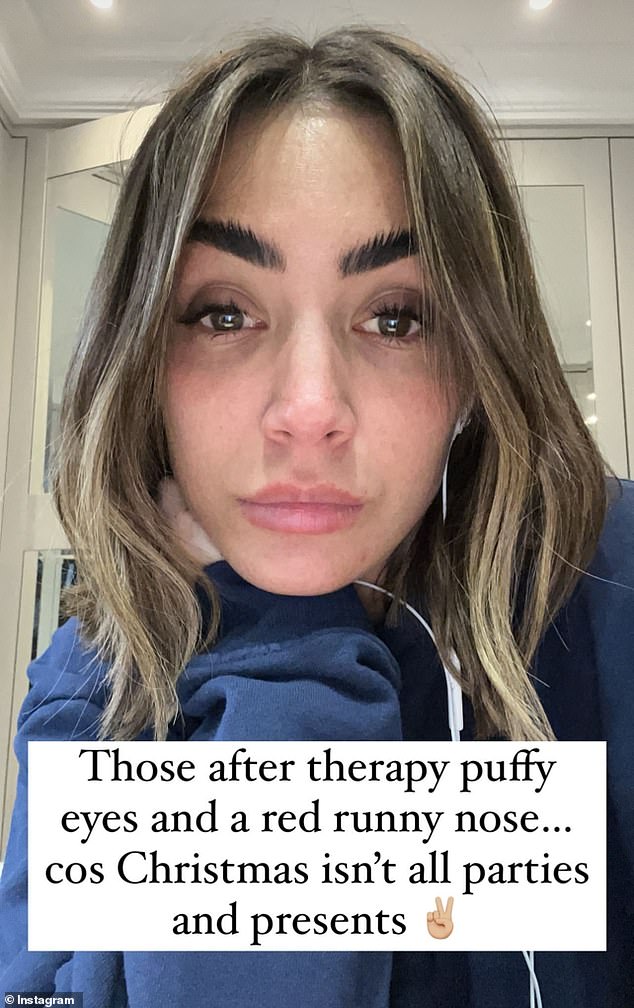 Upset: Last month, Frankie took to Instagram to share a selfie of herself crying after a therapy session and could be seen looking very downcast in the snap

‘Best available’ would require Chicago Bears to consider QBs in the draft. It’s an unlikely outcome — but a necessary process. – Boston Herald