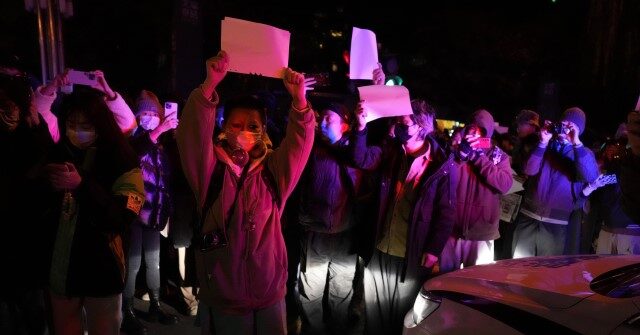 Police in white hazmat suits clashed with anti-lockdown protesters in the Chinese city of Guangzhou on Tuesday and Wednesday, providing evidence the uprising continues despite mounting threats of a brutal crackdown.

Chinese security officials actually used the word “crackdown” on Tuesday, teasing a Tiananmen Square-style ending for the biggest protest movement to sweep China since the 1989 student uprising – which might very well have toppled the Communist regime, had it not resorted to mass murder against the demonstrators and then pressured the civilized world into accepting it.

The uprising is still vigorous enough to push a flood of news and images past China’s censorship firewalls to the outside world, transmitting photos and videos from thousands of smartphones, so the battle that began in Guangzhou on Tuesday night was verified and reported by outlets like the Hong Kong Free Press (HKFP):

Security personnel in hazmat suits formed ranks shoulder-to-shoulder, taking cover under see-through riot shields, to make their way down a street in the southern city’s Haizhu district as glass smashed around them, videos posted on social media showed.

In the footage people could be heard screaming and shouting, as orange and blue barricades were pictured strewn across the ground.

People are seen throwing objects at the police, and later nearly a dozen men are filmed being taken away with their hands bound with cable ties.

The Central Political and Legal Affairs Commission in Beijing, China’s top security and law enforcement authority, used ominous language in a statement on Tuesday that dismissed the anti-lockdown protests as the work of “hostile forces” and threatened to “crack down on illegal criminal acts that disrupt social order.”

“We are not foreign forces, we are Chinese citizens. China should have different voices,” a demonstrator shouted in response at an event in Hong Kong on Tuesday.

Massive deployments of security forces have apparently suppressed protests in the capital city of Beijing and Shanghai, an international financial hub subjected to an exceptionally grueling coronavirus lockdown last spring.

Massive protests erupted over the weekend along a road in Shanghai named after Urumqi, the capital of the heavily oppressed Uyghur region of East Turkistan and the scene of a deadly apartment fire on Thursday. A still-unknown number of families were killed in the fire because coronavirus lockdown protocols trapped them inside the building and prevented firefighters from extinguishing the blaze.

Protests continued in other Chinese cities despite mass arrests and threats of retaliation against demonstrators, so the Communist regime is evidently thinking about relaxing its deranged “zero Covid” policies just enough to cool public anger.

Chinese health officials told reporters on Tuesday they might “fine tune and modify” their policies to moderate the “negative impact on people’s livelihoods and lives,” which is the closest any Chinese Communist official has come to admitting the lockdowns could be profoundly harmful.

Reuters on Wednesday spoke to young Chinese who are still livid over the deaths in Urumqi and others previously killed by coronavirus lockdowns. These students and young professionals were both exhilarated and terrified by the prospect of rising up against their Communist masters and demanding greater political freedoms. Some saw similarities between the current moment and the Tiananmen Square uprising – an event the Chinese Communist Party has ordered them to forget.

“This is the first time in my life I’ve done something like this. In my heart, I’ve murmured such things a thousand times, but hearing these slogans suddenly chanted by so many real people was exciting and shocking to me,” a young woman in Shanghai said, requesting a pseudonym for her safety.

“In an irrational reality, being rational and using logical words are far, far from adequate,” she told online friends who were reluctant to join the protest movement, although she appreciated the need to “lie low” and evade the Communist Party’s pervasive electronic surveillance network.

“The worst is that you’ll be locked up right? But it’s better than facing the reality day by day and then not being able to do anything, and then you feel sorry for yourself,” another female protester said defiantly.

Washington Post reporter Cate Cadell on Tuesday offered some chilling observations of just how all-encompassing the Chinese security state has become, illustrating how difficult it will be for even the most tech-savvy young people to “lie low” after having even tangential contact with the protest movement:

“There’s tons of people protesting, they’ll never catch me,” nope – Chinese police stations use huge networks of facial recognition cameras that can retroactively trace people for days or even months.

As Cadell meticulously documented, none of the techniques outsiders assume might be effective will save demonstrators from the “crackdown” threatened by Communist officials – not masks, safety in numbers, or online anonymity, or even evading firewalls to use foreign social media platforms.

There is little indulgence for the youthful exuberance of students, the official system for filing grievances is merely employed to target disgruntled subjects for even more surveillance, and as protesters learned over the past week, Chinese police will arrest people for holding signs that do not say anything at all.