From Will Smith’s Slapgate to Rebel Wilson’s surprise baby announcement, here are all the big pop culture headlines from 2022 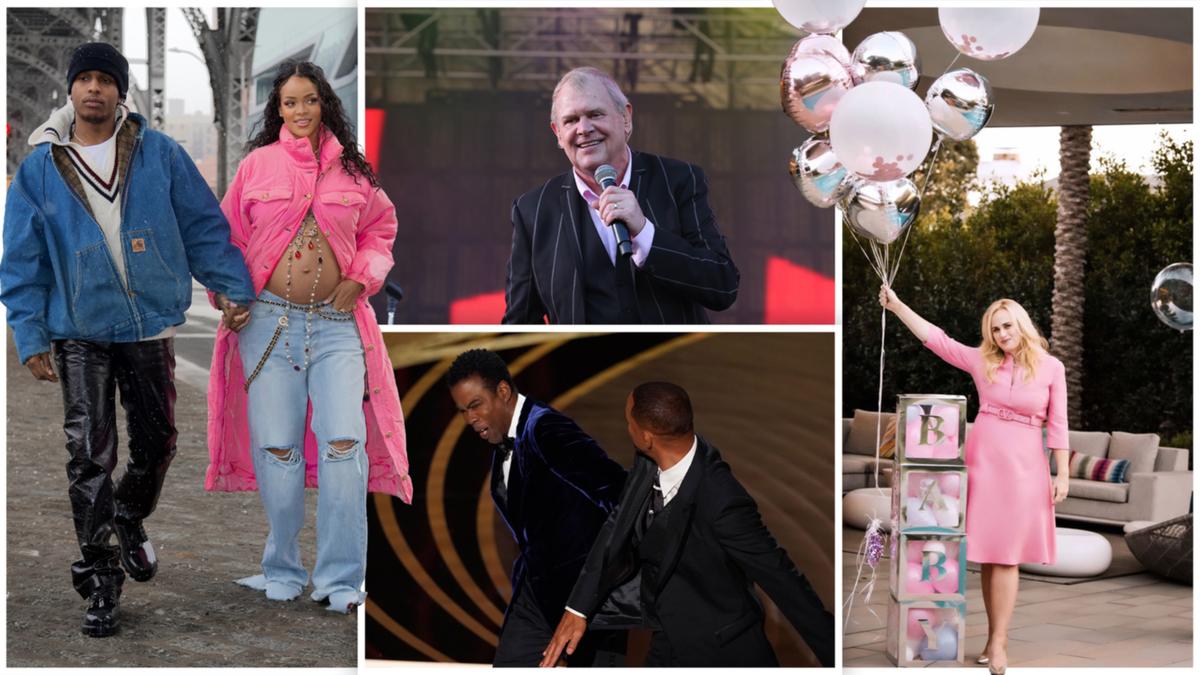 This year the entertainment industry produced some of the biggest moments in pop culture history.

Some were planned, others unplanned, but nevertheless these were the stories that broke the internet and in some cases, made for milestone moments.

From Rihanna’s surprise pregnancy announcement to Will Smith slapping Chris Rock at the Oscars, Rebel Wilson’s coming out and sadly a few deaths, this year was one for the books.

Here’s a look back at 10 of the biggest celebrity headlines from the year that was.

Some of Australian TV’s most famous anchors have stepped down from their posts this year.

ABC 7.30’s Leigh Sales announced she would be stepping down in February. Her final episode aired in June.

Ally Langdon will take over for Grimshaw on ACA, with Sarah Abo taking over for Ally on the TODAY show. Studio 10’s Sarah Harris will step in for Bickmore, with a brand new crew of anchors joining Waleed Aly in 2023.

The nation was left shocked in August when it was revealed legendary Australian musician John Farnham would be undergoing surgery for cancer.

The singer underwent a mammoth operation to remove a cancerous tumour in his mouth.

It’s believed Farnham may never be able to sing again. He has since been moved to a rehabilitation centre.

He’s yet to do any interviews, however, his family have kept fans updated throughout the process.

Maroon 5 frontman Adam Levine was caught in a massive cheating scandal just days after it was revealed he and his model wife were expecting their third child.

A TikTok video went viral of an influencer claiming to have had an affair with Levine. Several other accusers later came forward.

Levine only ever addressed one of the accusations, mainly from a woman who had messages showing him asking for approval to name his unborn child after her.

The Kardashians tend to make headlines every week, sometimes even two times in one day.

There’s a reason why they called their former TV series Keeping Up, because trying to keep up with this famous family is hard to do.

This year was a massive one for Kris Jenner and her brood, with two new babies welcomed, a wedding, break ups, and a new TV series.

The sequin gown was worn by the blonde bombshell in 1962 when she infamously sang Happy Birthday to US President John F. Kennedy.

It was a big year on a personal level for Australian comedian Rebel Wilson.

In June, the actor came out and revealed she was in a same-sex relationship with designer Ramona Agruma.

It was later revealed she had been pressured into sharing the news after the Sydney Morning Herald approached her wanting a comment about her then-private relationship.

Then in November, she surprised fans when she announced she had become a mum for the first time, revealing on Instagram that she had welcomed a daughter via a surrogate.

In August, the country woke up to the shocking news that beloved singer Olivia Newton John had lost her long battle with cancer.

“Dame Olivia Newton-John (73) passed away peacefully at her Ranch in Southern California this morning, surrounded by family and friends,” the statement read.

“Olivia has been a symbol of triumphs and hope for over 30 years sharing her journey with breast cancer.”

The ARIA Awards paid tribute to the late singer with a star-studded performance at the awards show ceremony in November.

What felt like the longest celebrity court case in history came to a head in June.

Johnny Depp and Amber Heard have been going back and forth in a courtroom for months, the pair battling it out in the UK ahead of their US trial which gripped the world.

The intense six-week trial gave both of them the opportunity to take the stand as well as a surprise appearance from Depp’s ex Kate Moss.

Ultimately, Depp won after a jury found that Heard had defamed Depp by saying that he had abused her over the course of their relationship.

After announcing she was expecting her first child in January, the singer went on to redefine maternity wear, making it fashionable to show off your baby bump.

She and her partner A$AP Rocky welcomed their son in May.

Then in September, RiRi announced she would be next year’s Superbowl halftime performer, making her long-awaited return to the music industry.

In November, she released her first single in six years with Lift Me Up, which was the first song released off the Black Panther: Wakanda Forever soundtrack.

In a year where we lost several big stars including Betty White, Shane Warne, Kirstie Alley and Nichelle Nichols, it was the death of a royal that rocked the world.

Although the world had been preparing for her death for decades, it still didn’t stop the wave of grief that took over millions in September after the announcement that Queen Elizabeth had died.

The Palace announced the Queen was not well on September 8. A sign that things may be taking a turn was the rush of senior royals, including the exiled Prince Harry, who made their way to Scotland to be by her side.

Within a matter of hours, it was announced Her Majesty had passed away at her home in Balmoral.

The UK’s longest-serving monarch died aged 96, after reigning for 70 years. Her son King Charles III will have his coronation in May.

Will Smith slaps Chris Rock at the Oscars

It was the slap heard around the world.

During the 2022 Academy Awards ceremony, Will Smith walked on stage and slapped Chris Rock after the comedian made a joke about his wife Jada Pinkett Smith.

No one knew if the slap was a joke or for real, but it soon became clear that it was definitely not part of the script.

Moments after the incident, Smith won his first-ever Oscar.

Both stars went into hiding with the Academy banning Smith from attending the awards in person, though he is still eligible for nominations.

How Ukraine’s Zelenskyy won the world’s respect in 2022