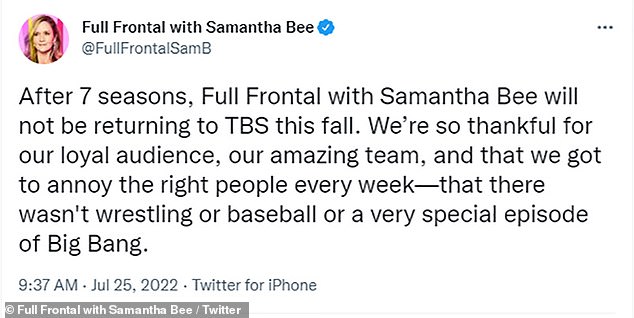 Full Frontal With Samantha Bee has been axed from TBS network.

The award-winning late night talk show first aired in 2016, hosted by the comedian, 52, and went on for a total of seven seasons, with its last episode premiering in June.

The network is currently undergoing a Warner Bros. Discovery merger, and a number of other shows had their lifespan cut short.

Sad news: Full Frontal which is hosted by Samantha Bee, 52, officially has been canceled on TBS

The show’s host and former The Daily Show correspondent jumped onto her social media to confirm the surprising news.

On Full Frontal’s Twitter page, the star wrote out, ‘After 7 seasons, Full Front with Samantha Bee will not be returning to TBS this fall’

She added how grateful she was to not only the loyal fans, but also the crew and team that helped put the show on the air. 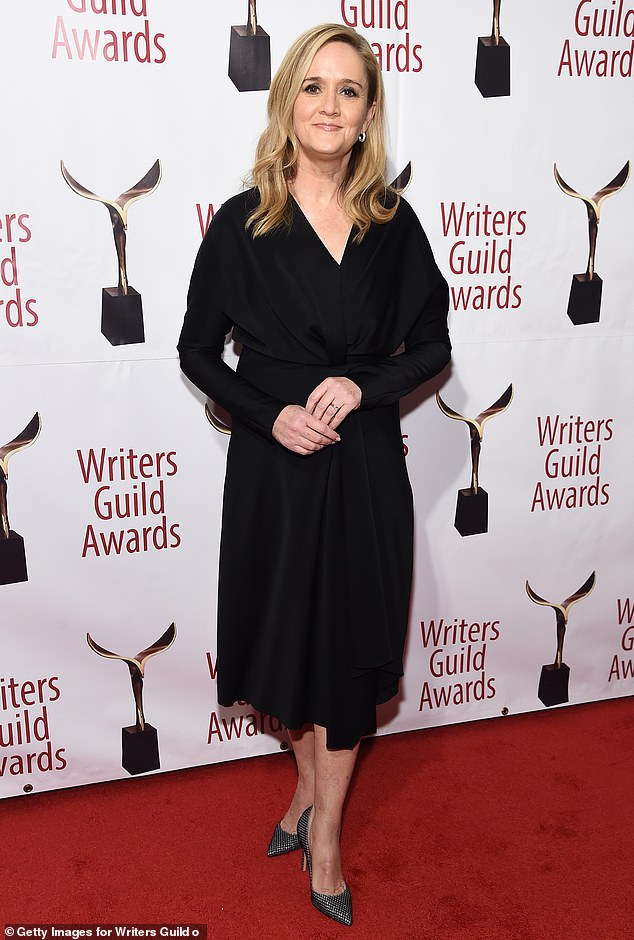 Hard-worker: The star formerly was a devoted correspondent on The Daily Show With Jon Stewart; seen in 2020

Moving on: The host shared a few tweets earlier on Monday to share the news and her feelings about the show’s abrupt end

Samantha typed out a few more statements earlier on Friday to follow up with the announcement.

‘Full Frontal is leaving TBS to go spend more time with her family,’ the writer said, adding an air of comedy to the situation.

According to Deadline, a spokeswoman for TBS network told the publication that, ‘As we continue to shape our new programming strategy, we’ve made some difficult, business-based decisions.’

She added that the network has been thrilled to have been the ‘home’ for the talk show and thanked Samantha, including, ‘the rest of the Emmy-nominated team for their groundbreaking work.’

However, it seems not all hope is lost about a potential future on TBS. ‘We celebrate this extraordinarily talented cast and crew and look forward to exploring new opportunities to work with them in the future.’

Message: The talk show host for the award-winning late night series left a few messages to her fans and audience 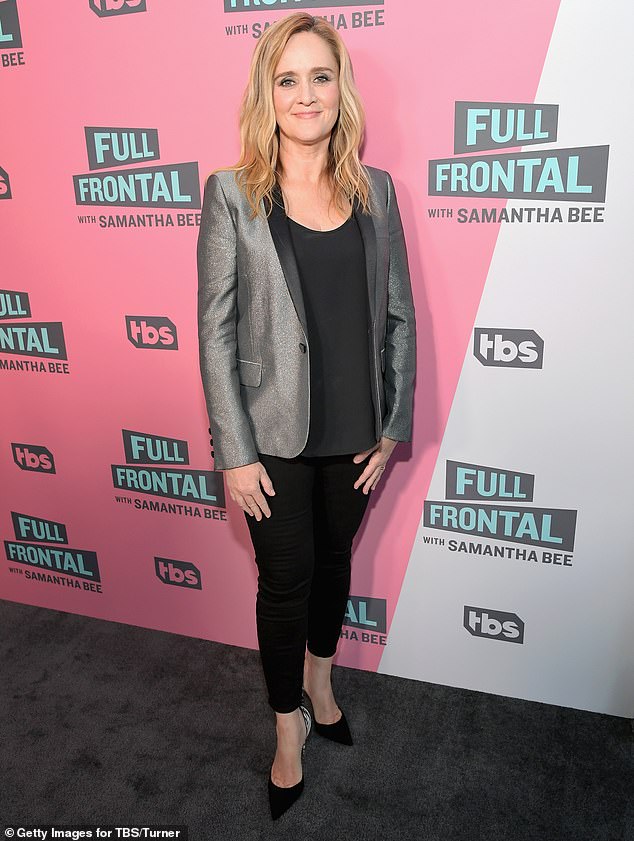 Milestone show: Full Frontal was a stable show on the TBS network, winning Emmy awards during its run

The talented TV star also talked to Deadline not long ago, stating that although a lot has happened in the world in recent years, ‘somehow we made 200 episodes of TV on top of that.’

Full Frontal was hosted by Samantha who gave ‘her own wry commentary to the contemporary issues of the day,’ according to an official synopsis.

The producer told Variety in 2016 when the series first premiered that the show gave an, ‘opportunity to say the things we want in the exact way we want to say them.’

According to the publication, former general manager of TBS, TNT, and TruTV, Brett Weitz, stepped down in May after the merger.

Other shows that were scrapped include the comedy, The Last O.G., and the sitcom, Chad.

Her husband Jason Jones was on the hit sitcom The Detour with Natalie Zea. 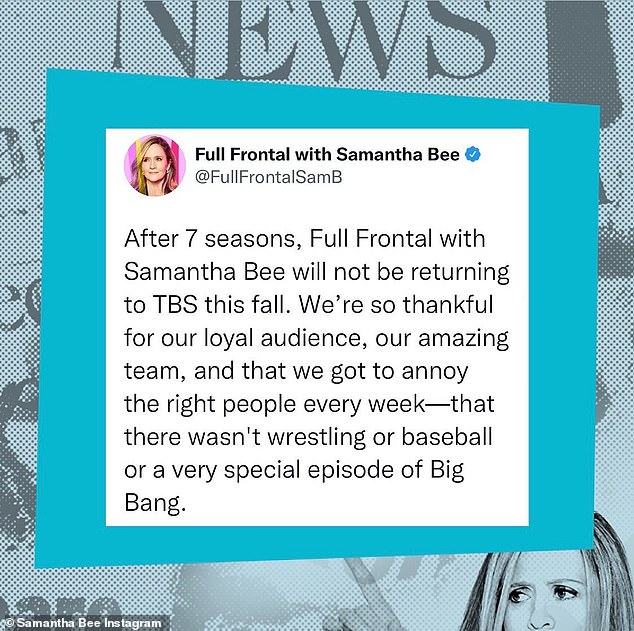 Confirmation: Samantha also went onto her personal Instagram page to announce the news of the show’s cancellation 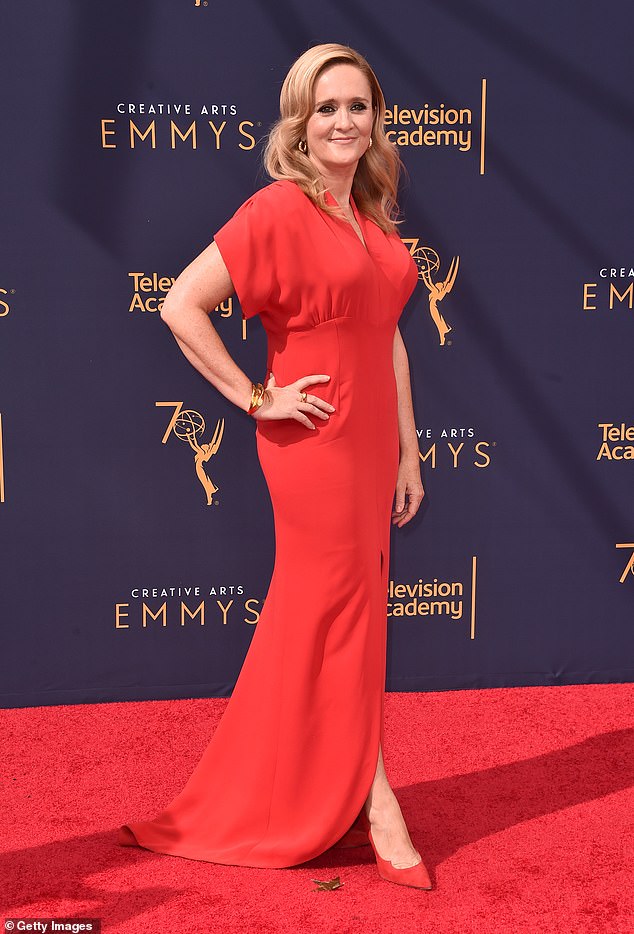