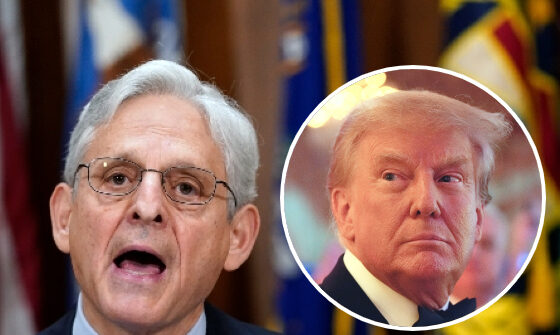 On November 18, Garland named former federal prosecutor Jack Smith special counsel for two probes by the Department of Justice of Trump. About two weeks prior, on November 2, Biden’s classified documents were reportedly unearthed at Biden’s so-called “think tank,” the Penn Biden Center, by the president’s attorney.

Attorney General Merrick Garland listens listens as President Joe Biden speaks in the Rose Garden of the White House in Washington, Friday, May 13, 2022, during an event to highlight state and local leaders who are investing American Rescue Plan funding. (AP Photo/Susan Walsh)

Garland could have known about Biden’s mishandling of documents just six days before the midterm elections. Critics say Garland’s decision to not disclose to revelations before January was a political calculation to benefit Democrats in the midterms.

Biden has claimed he did not know classified documents were stashed at the Penn Biden Center, but Mike Davis, founder and president of the pro-Trump Article III Project, called Biden’s claim “nonsense.”

In September, Joe Biden was asked about the classified documents at Mar-a-Lago.

He said he didn’t know “how anyone could be that irresponsible” and questioned “what data was in there that may compromise sources and methods?” pic.twitter.com/jvw8FcBZZj

“How that could possibly happen? How anyone could be that irresponsible,” the president said. “And it just — totally irresponsible.”

“And I thought, what data was in there that may compromise sources and methods?” Biden added.

“Vice presidents cannot declassify documents. And the fact that Joe Biden is in possession of classified documents when he was vice president, signals we need to have a serious investigation into this,” Rep. Marjorie Taylor Greene (R-GA) told C-SPAN.