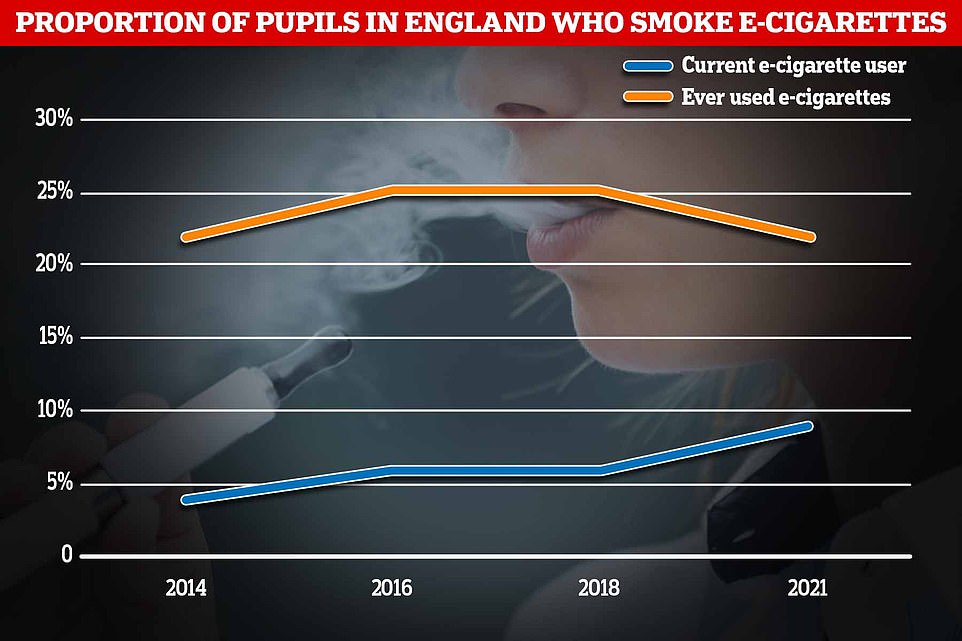 A tenth of secondary school pupils in England use e-cigarettes but the proportion smoking traditional cigarettes is three times smaller and plummeted to its lowest ever level, official figures show.

NHS Digital, which quizzed nearly 10,000 students aged 11 to 15 on their smoking, drug and drinking habits last year, found that nine per cent currently vape — the highest rate logged since the survey began in 2014.

Girls appear to be driving the trend, with the vape rate doubling among them in the last three years, while it has remained flat among boys for five years.

Experts have blamed the rise on social media, where videos showing off vape smoke tricks have racked up tens of millions of views. A Government-funded report this year found that almost half of users had watched vape videos on TikTok, Instagram or Snapchat.

While the e-cigarette rate has soared — jumping 50 per cent in three years — the proportion lighting up traditional cigarettes has flatlined. One in 33 pupils now smoke tobacco, compared to a peak of one in four in the 1990s.

And one in six students say they have ever taken drugs — down by a quarter in three years. Cannabis remains the most popular drug, followed by nitrous oxide and so-called ‘legal highs’.

Meanwhile, two in five pupils say they have ever had alcohol — down by four per cent compared to 2018 — while the number of regulars drinkers is flat.

Experts told MailOnline the downturn in drug and alcohol use is likely down the Covid lockdowns, which gave youngster fewer opportunities to socialise and go to parties, along with pressures to do well in school.

NHS Digital, which quizzed nearly 10,000 students aged 11 to 15 on their smoking, drug and drinking habits last year, found that nine per cent currently vape — the highest rate logged since the survey began in 2014 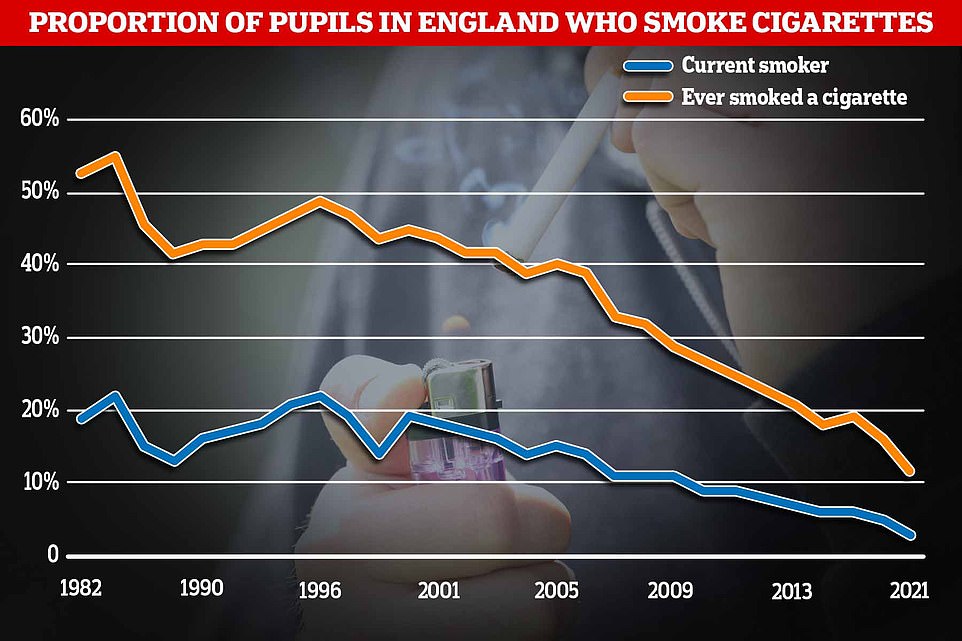 While the e-cigarette rate has soared — jumping 50 per cent in three years — the proportion lighting up traditional cigarettes has flatlined. One in 33 pupils now smoke tobacco, compared to a peak of one in four in the 1990s

Vape pens are devices that heat a liquid into an aerosol that the user inhales.

The liquid usually has nicotine and flavoring in it, and other additives.

The nicotine in e-cigarettes and regular cigarettes is addictive.

E-cigarettes are considered tobacco products because most of them contain nicotine, which comes from tobacco.

Besides nicotine, e-cigarettes can contain harmful and potentially harmful ingredients, including:

Nicotine exposure during childhood and young adulthood can cause addiction and harm the developing brain.

Source: US Centers for Disease Control and Prevention

Results show that 10 per cent of girls and 7 per cent of boys are current e-cigarette users.

Uptake among boys has been flat since 2016. But the rate has doubled among girls in just three years — from one in 20 to one in 10 — while the proportion who are regular users has increased five-fold.

The rate rises sharply among older pupils. Among 15-year-olds, one in five girls and one in seven boys vape, compared to one in 100 boys and girls aged 11.

Around three-quarters of current vapers are also regular or occasional smokers, while more than half are ex-smokers. Only three per cent of e-cigarette users have never smoked.

Friends (45 per cent), newsagents (41 per cent) and relatives (35 per cent) are the most likely sources of e-cigarettes for student vapers.

The sharpest rise in where people source their vapes was at newsagents — up five-fold since 2018 — followed by street markets and petrol station shops.

It is illegal to sell vapes to under-18s. But videos on social media and the range of colours and flavours they are available in — such pink lemonade, bubblegum and cotton candy — have been blamed for getting youngsters hooked. The price has also been blamed, with the products widely available for less than £5.

A Government-commissioned review published in June recommended a review of vape flavours to ensure they don’t appeal to young people.

The paper, by former children’s charity chief Javed Khan, also recommended that cartoons and images on vaping products that appeal to children should be banned.

Campaigners have called for more funding to enforce laws against underage sales, action on child-friendly packaging and labelling, as well as promotion on social media.

Ian Hamilton, an addiction expert at the University of York, told MailOnline young people are likely turning to e-cigarettes as they perceive it as ‘safe in comparison to traditional cigarettes’.

While e-cigarettes are not thought to be as detrimental to health as tobacco, they still contain addictive nicotine and other potentially harmful flavourants and particles.

Mr Hamilton said: ‘It is really worrying to see this rise in vaping as we still don’t know what the long term effects will be on young people as they develop into adulthood.

‘The Covid pandemic will have had a significant impact on young people’s drug use as they had fewer opportunities to mix and to party due to restrictions in place at the time.’

But he said the continuing trend of fewer young people using drugs is also down to school pressures, the risk of their habit appearing on social media and increased awareness around mental health.

Mr Hamilton said: ‘In part they are under more pressure to achieve educationally so don’t want drugs to jeopardize that.

‘They also are conscious of the impact social media could have on their lives and job prospects if they were to appear intoxicated or using drugs and alcohol.

‘Young people are also more aware than previous generations about their mental health and seeking help when they are struggling psychologically this reduces their need to self-medicate with drugs.’

Meanwhile, the NHS Digital report shows that the proportion of pupils who currently smoke dropped from 5 per cent in 2018 to 3 per cent in 2021 — the lowest level since that survey began in 1982. The rate peaked at 22 per cent in 1996 and has been trending downwards ever since.

As with vaping, the rate is higher among girls, with 4 per cent saying they are current smokers, compared to 2 per cent of boys. 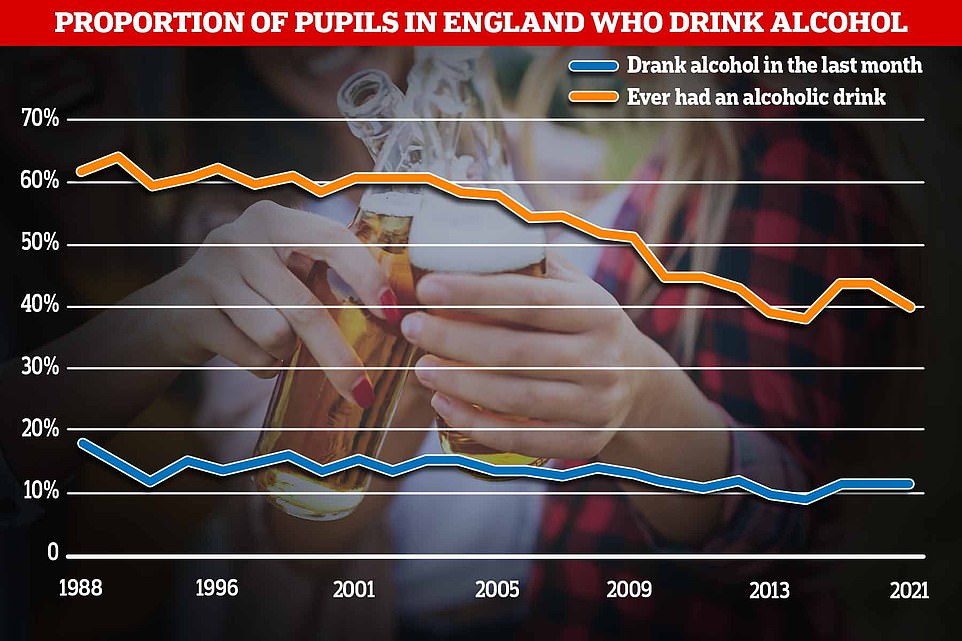 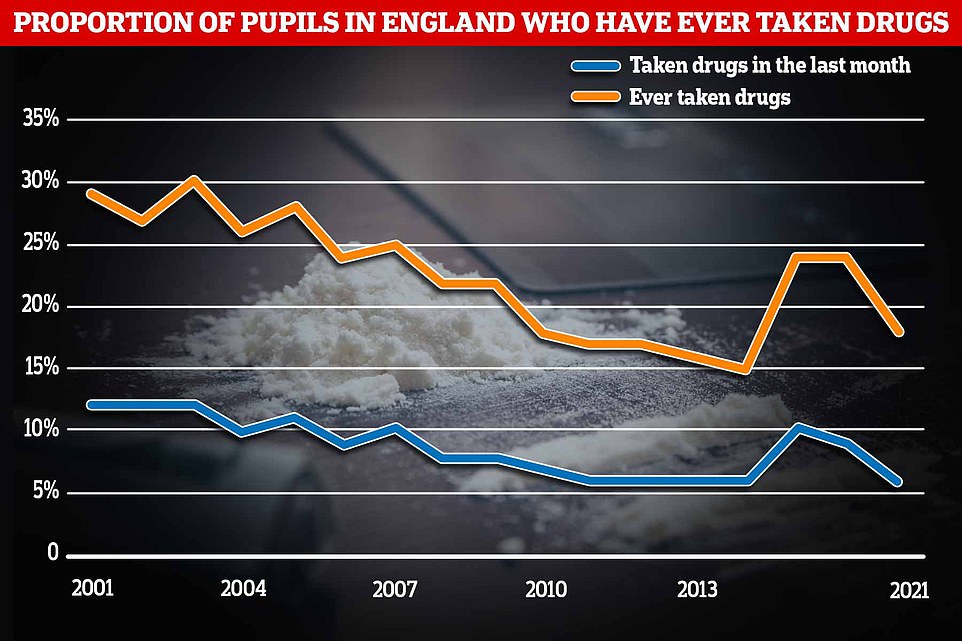 One in six students say they have ever taken drugs — down by a quarter in three years. Cannabis remains the most popular drug, followed by nitrous oxide and so-called ‘legal highs’ 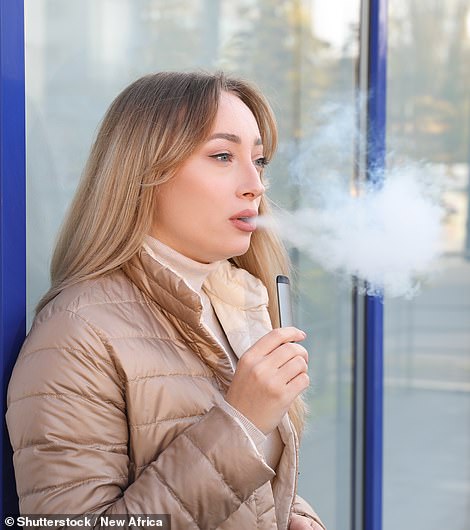 NHS Digital, which quizzed nearly 10,000 students aged 11 to 15 last year, found that nine per cent currently vape — the highest rate logged since the survey began in 2014. Girls appear to be driving the trend, with the vape rate doubling among them in the last three years, while it has remained flat among boys for five years

Some 6 per cent of pupils said they usually drank alcohol at least once a week, which is unchanged between the two surveys.

The latest survey also shows that two in five students aged 11 to 15 have ever had alcohol — the lowest level since 2014. The figure, which is down from 44 per cent in 2018, has remained relatively flat for the last decade.

One in five pupils 15-year-olds had drank alcohol in the last week, compared to one in 20 11-year-olds.

Among the small number who said they are current drinkers, pupils were more likely to report drinking at home compared with 2018, and two-thirds said they usually drank with their parents.

Meanwhile, the drug survey showed 18 per cent of pupils had ever taken drugs, down from 24 per cent in 2018. The rate has bounced between 15 and 25 per cent for the last decade.

Overall, 4.7 per cent of pupils had taken psychoactive substances — such as nitrous oxide and ‘legal highs’ — while 2.6 had taken stimulants, including cocaine and ecstasy, while 2.3 per cent had taken psychedelics, such as magic mushrooms and LSD.

One in 14 children aged 11 said they had tried drugs, compared to a third of 15-year-olds.

The 2021 questionnaire results mark the first time girls were more likely to have taken drugs than boys (19 per cent vs 17 per cent).

Almost half (46 per cent) of 15-year-old girls reported a low level of happiness, and 51 per cent reported a high level of anxiety on the previous day.

Prepare plan in consultation with states to modernise 10 lakh govt schools in 5 yrs: Kejriwal to PM

What’s new with the flu? Here are 7 things to know – Twin Cities